"Orange Is the New Black" ends justly, asking: Where do we go from here?

The final season tugs at our heartstrings as it ties up multiple storylines, but never feels like a long sentence 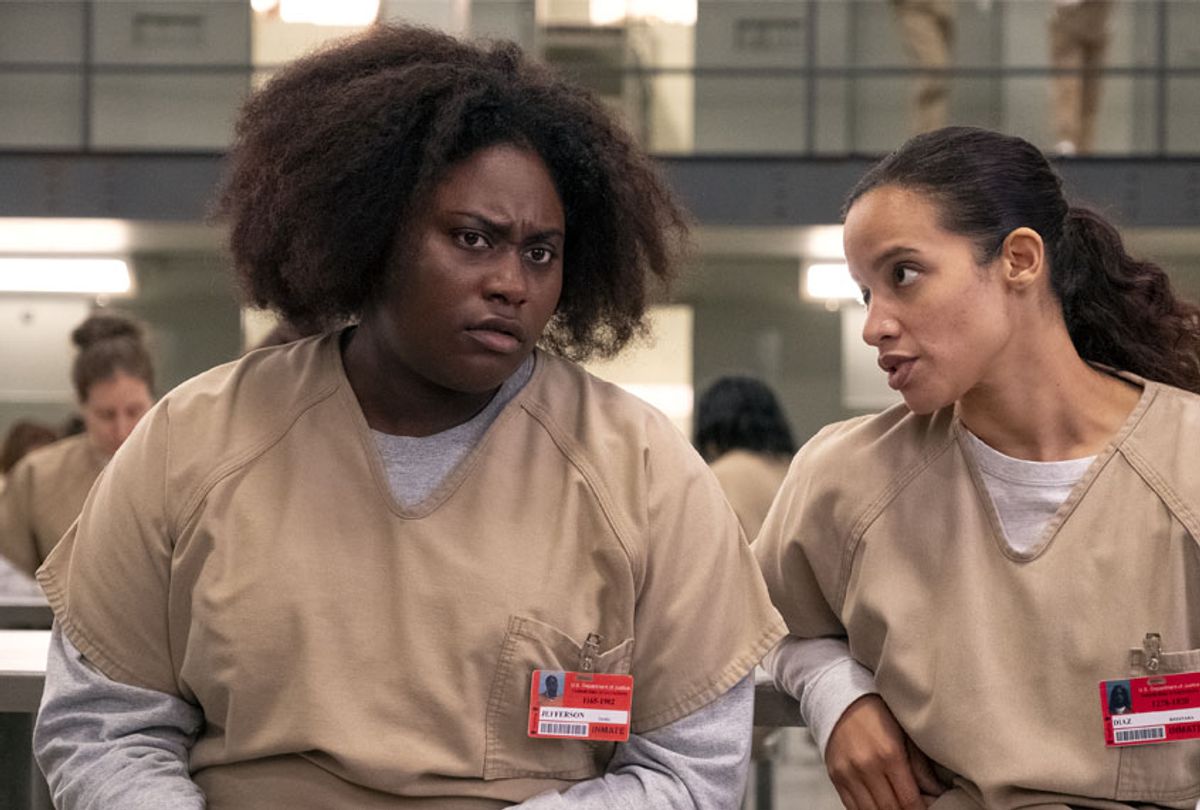 “Orange Is the New Black” begins with a simple deception and ends in a state of revelation. The deception was to trick viewers into watching a series about black and brown women, most of them poor, by using an upper-middle-class white blonde as bait. The revelation is — actually, make that revelations, plural — is that most of us ended up caring more about their varied circumstances than we did about that white girl.

As the series embarks upon its seventh and final season, debuting on Netflix on Friday, all of the lives examined most closely over many years have extensively changed. Piper Chapman (Taylor Schilling), Taystee (Danielle Brooks),  Black Cindy (Adrienne Moore), Suzanne (Uzo Aduba), Tiffany “Pennsatucky” Doggett (Taryn Manning), Red (Kate Mulgrew), Nicky (Natasha Lyonne), Alex Vause (Laura Prepon) and many others started out together in Litchfield Penitentiary, under the same roof. But we leave them in many different places, which is fitting and, in some cases, terribly unfair.  That also feels true, which means it passes the ultimate test of any series closer.

Seven seasons of “Orange” walk us through all of their stories and others in great detail, allowing viewers to understand how arbitrary and unjust the legal system can be to anyone who can’t buy their way out of trouble, who has the bad luck to be born into the wrong socioeconomic class, or happens to be in the wrong place at the wrong time and be poor, black or brown.

That every woman is bound for disparate destinations in life for an assortment of reasons is this drama's essential message. But in these final episodes we get a sense of the varying degrees to which this system can be escaped or not; whether a woman has served her time, has nothing but years of her sentence ahead or, more frightening still, is trapped in some limbo with no recourse and no connection to the outside world.

Every creator of a long running series faces pressure to, in industry parlance, “stick the landing.” A few operate with a level of such complexity that they set themselves up for more scrutiny that others, and purely from a logistical standpoint, Netflix’s “Orange Is the New Black” would seem to be one of them.

The trick of “Orange” is that its individual stories aren’t terribly labyrinthine. Neither are the places where they intersect. That’s why they’re so affecting. Instead, the challenge of this show’s finale season is to shepherd this massive vessel into port, by which I refer to the sheer number of storylines its writers have has serviced over its 91 episodes.

“Orange Is the New Black” never apologizes for its sprawl or seeks to tame it, any more than viewers who accept the invitation into its multitude of stories would want to be denied any one of them. The end of the series doesn’t answer every question about every character’s backstory; there are simply too many people in the series to do that without losing focus on the elements that make the series such a moving view of America in microcosm.

That list of characters at the top is long and to some reads as frustratingly incomplete, but this curtain call is not. Series creator Jenji Kohan and her writers pared down the storyline’s focus over the years, kissing a few characters goodbye early on, or appearing to do so, in order to zero in on the class parables and larger philosophical themes mined over the years.

I’ve pointed this out before, but even in lesser seasons — no drama is perfect, and this one tripped up more than once along the way — its power has always rested in its ongoing championing of humanity and unity against all else. “Orange Is the New Black” is mainly about women, but even the imperfect if well-meaning men who support them like Joe Caputo (Nick Sandow) do what they can to push back against adversity and make indignities survivable if not completely surmountable. Its best hours are the ones in which everyone aligns against injustice. And its most honest depict the unequal penalties each pays for doing so.

As “Orange Is the New Black” concludes, a number of its characters have been released or are on the verge of completing their sentences. But it’s probably fitting that the heaviest storylines this season revolve around the women who kicked off the civil disobedience that alters the prison’s ecosystem forever.

Piper is sprung at the end of season 6, preceded into the world outside by Aleida (Elizabeth Rodriguez) and others. But while we’ve spent several seasons watching Aleida struggle to make ends meet after doing time, and her daughter Daya (Dascha Polanco) deteriorate in lock-up, Piper’s reintegration is as smooth as that artisanal soap she used to sell.

In this way Kohan brings us full circle by focusing on Piper’s frustrations and selfishness which, predictably, are the definition of white people problems. Members of the sorority she left behind are nowhere nearly as fortunate.

The prison formerly known as Litchfield and MCC is now a fine product of PolyCon Corrections, a private corporation more interested in maintaining the bottom line than rehabilitating its prisoners. Within this dynamic Kohan and the drama's other producers examine the systemic injustice via the prism of the Black Lives Matter movement and #MeToo, but season 7's most poignant and alarming thread involves PolyCon’s investment in immigration detention centers.

When the writers began developing its detention storyline and shooting it, images of overcrowded, filthy and inhumane conditions at border detention centers had not yet gone public. Even so, “Orange Is the New Black” makes its point while staying the course with its other mission of contrasting privilege and pain. And its treatment of the issue feels current and accurate, and the threads drawing us into this particular nightmare never lose sight of even a sliver of hope.

Piper, as previously mentioned, has a place to stay and opportunities of which she can avail herself and, naturally, ruin by her whining. Taystee, on the other hand — facing a life sentence for a murder she didn’t commit — wrestles with betrayal and an existential crisis that gnaws at her sanity.

Others like Gloria (Selenis Leyva) and Maria Ruiz (Jessica Pimentel) are simply doing their best to hang on until they can complete their sentence or, in Maria’s case, make it through another day.

“Orange Is the New Black” concludes in a year that already has witnessed other acclaimed hits come to an end, including “Game of Thrones” and “The Big Bang Theory.” Their final episodes aired amidst a great deal of handwringing over what series could possibly replace them. Neither can be replaced by anything, of course; we’ll simply move on to the next obsession.

“Orange,” in contrast, closes on a note of benediction for some of its characters and uncertainty for others. But instead of leaving us to wonder what’s next, the finale whispers the question of, where do we go from here? This, to me, is a conclusion that feels true and honorable, that isn’t necessarily a happy ending but a right one that satisfies. It’s a sign of knowing that all anyone wants at the end of a long stint away is to go back home, even if home is a different destination from where we started.