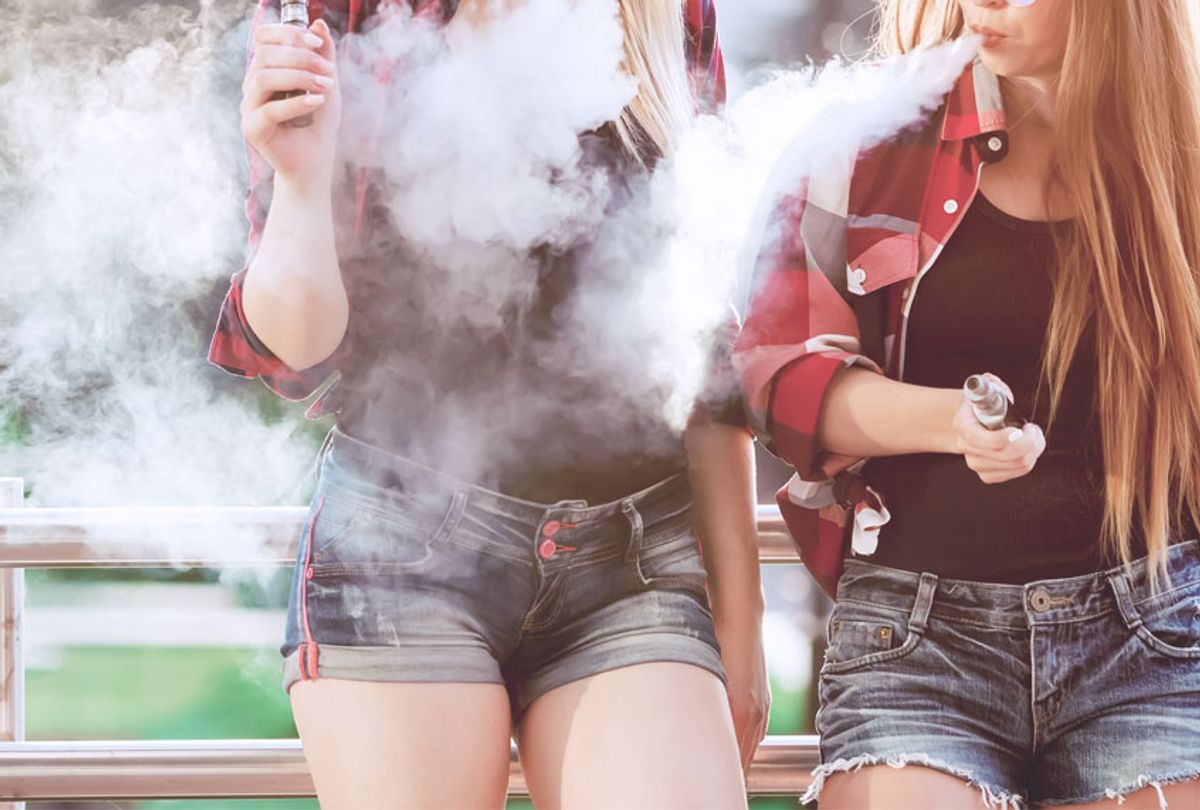 Juul Labs, the nation’s leading manufacturer of e-cigarettes, has hired as its medical director a prominent University of California researcher known for his work on the dangers nicotine poses for the adolescent brain.

The company said the hire will support its efforts to stem a teen vaping craze the Food and Drug Administration has labeled an epidemic. But critics see a cynical tactic taken straight from the Big Tobacco playbook.

Dr. Mark Rubinstein, a pediatrician and formerly a leading researcher with UC San Francisco’s Center for Tobacco Control Research and Education, took up the post of executive medical officer at Juul last week, a move first reported by Politico. Rubinstein has done signature research on teen addiction and how nicotine, which is present in high levels in e-cigarettes, affects adolescents. He has spoken openly of the potential risks of vaping for children.

In a statement, Juul said Rubinstein would oversee research on underage use of vapor products, guide the company’s youth prevention programs and policy positions, and help form links with the public health community. The company declined to make Rubinstein available for an interview. It says the move is part of its effort to reduce teen vaping while it continues to provide an alternative to smoking for adults.

Colleagues of Rubinstein, however, said they were disturbed by the move and skeptical of Juul’s motivations. At the heart of their concerns is whether Juul is willing to lose the giant base of teen users who have helped fuel the company’s meteoric rise and hefty market share.

Stanford University professor Bonnie Halpern-Felsher, who researches teen vaping and writes curriculum on teen prevention, helped train Rubinstein at UCSF. She said she was both incensed and disappointed when she heard about his move.

“Even if you believe in harm reduction,” she said, “to go work for a tobacco company … to me goes against everything that anybody doing control should believe in.” She said she is particularly concerned that a specialist on the effects of nicotine in adolescents has gone to work for the industry. Last year, Altria, one of the world’s largest cigarette makers, bought 35% of Juul for $12.8 billion.

Stanton Glantz, director of the Center for Tobacco Control Research and Education, concurred, saying he was “shocked and depressed” by Rubinstein’s decision to leave UCSF for Juul. He sees Juul’s early social media campaigns as evidence the company has intentionally marketed to teens. Research supports this claim, though the company denies it and has shut down its Facebook and Instagram presence.

Not everyone shares their skepticism. Dr. Neal Benowitz, a UCSF professor who has studied addiction and smoking cessation for decades, frequently published with Rubinstein. He said he is hopeful that e-cigarettes can help people quit smoking and wants them to remain on the market while more research is done. He was shocked by the job change but said that if anyone can help figure out strategies to reduce youth vaping, it’s Rubinstein.

Rubinstein’s hire comes as Juul works to gather evidence to submit to the FDA that its devices offer more public benefit than risk. If it fails to convince the agency, Juul could be prohibited from selling most of its products.

Under the Trump administration, the FDA, which has oversight of all tobacco products, originally gave e-cigarette manufacturers until 2022 to file applications for approval for their devices, but a federal judge recently advanced the deadline to 2020. Juul has been wooing prominent researchers in the lead-up to the deadline, but with limited success amid concerns about the company’s goals.

“Part of Juul’s strategy is to create credibility and buy influence by hiring everybody who would take their money. We shouldn’t be fooled: Juul created the youth e-cigarette epidemic and refuses to take responsibility for it,” said Vince Willmore, spokesman for the Campaign for Tobacco-Free Kids.

Some believe it will be a tall order for the companies to show that e-cigarettes are a net benefit, given what is known about the risks of teen vaping and how few studies there have been on their long-term efficacy to help people quit smoking. Others see the FDA’s relatively lenient approach to the industry so far as a sign it may take a more favorable view of the products.

The FDA last year labeled teen vaping an “epidemic,” noting federal survey data showed nearly 1 in 5 high school students had tried vaping in 2018. While not as harmful as older tobacco products, e-cigarettes contain high doses of nicotine and a variety of carcinogenic chemicals, according to Rubinstein’s research. When it comes to vaping, Juul is by far the biggest seller in the U.S., capturing an estimated 70% of the e-cigarette market.

Anti-tobacco activists contend Juul increasingly is drawing on the tactics of tobacco companies to push back against regulation of its products. They point to a recent Juul campaign to overturn restrictions on e-cigarettes and flavored tobacco in San Francisco, where the company is based.

Last month, a Juul-backed ballot proposal gathered enough signatures to make the city’s November ballot. The bill’s supporters claim it would strengthen regulations around adolescent access to tobacco products, while ensuring the devices are available to those who want to quit smoking. Opponents, including the city’s former attorney, say the measure would take away local control and peel back existing bans on flavored tobacco products and the sale of e-cigarettes until they are approved by the FDA.

“To us, Juul is Big Tobacco 2.0,” said John Schachter of the Campaign for Tobacco-Free Kids, asserting the company is using deceptive legislation to maintain the sale of its products.

Benowitz of UCSF disagreed with the comparison, saying he sees a big difference between Juul, whose products show legitimate potential to help people addicted to cigarettes, and the tobacco companies that predate it.

One question at the core of the concerns over Rubinstein’s move is whether research and prevention should come from within the industry. An internal research program is problematic, said David Michaels, a professor at George Washington University who has studied corporate attacks on the science underpinning environmental protection. “I understand why scientists are concerned about a program like this, and I think they should be,” he said.

E-cigarette manufacturers, not taxpayers, should fund research of their products, Michaels said, but the research must be completely independent of the company. Tobacco companies have long used scientists to manufacture uncertainty and defend products that have harmed public health, he said, and the research they produce in-house will always be called into question.