Rubio wanted to score a cheap political point, but ended up feeding a narrative that breeds support for fascism 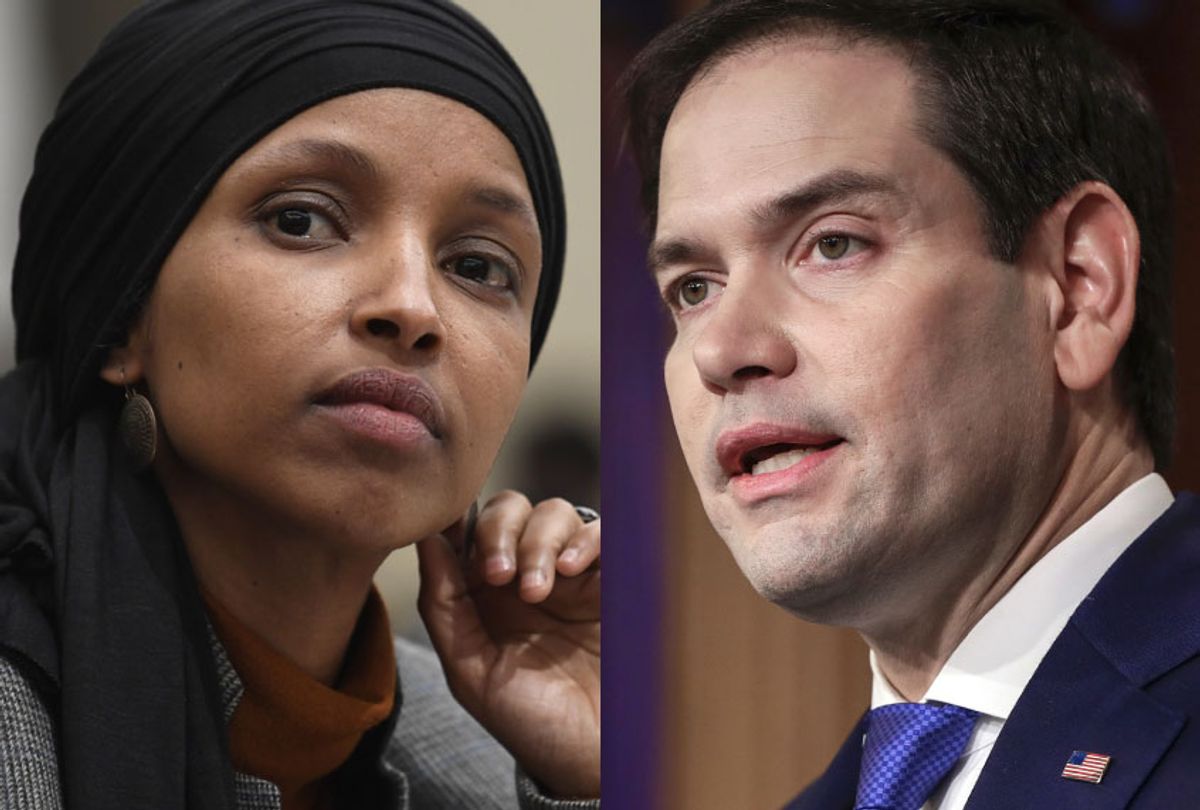 It's a story that flared up the outrage cycle swiftly and will almost certainly die down as swiftly. On Thursday afternoon, Sen. Marco Rubio, R-Fla., retweeted a video that had appeared on Fox News, the Daily Caller and elsewhere, purporting to show Rep. Ilhan Omar, D-Minn., calling on Americans to be "more fearful of white men" and advocating "profiling, monitoring and creating policies to fight the radicalization of white men."

Rubio was clearly still angry that mainstream journalists correctly called it racist when Donald Trump told four congresswomen of color to "go back" to other countries (when three of the four were born in the United States). So the Florida senator tweeted, "I am sure the media will now hound every Democrat to denounce this statement as racist. Right?"

The problem, of course, is the video was a fake, and not even a good one. It was deceptively edited to remove the language that made it quite clear that Omar was not calling for the profiling of white men, but in fact the opposite. She was using the absurdity of that idea — that all white men would be profiled simply because a handful of white men commit terrorist acts — to illustrate why it's unfair to treat Muslims that way.

As noted, this controversy is going to slip out of the attention-addled public and media consciousness soon enough. The controversy flared up 24 hours ago and is already in the dying stages, with Rubio coming up with an incoherent defense of why it was okay to tweet a falsified video that defamed a congressional colleague, while his critics throw up their hands and give up, because it's clear Rubio and his defenders are beyond being reasoned with.

But before this one slides under the waves completely, it's worth taking a closer look. This is yet another example of the way "mainstream" Republicans are drafted into Trump's larger mission of echoing and amplifying white nationalist talking points, thereby pushing garden variety conservatives into more radical or frankly fascist views on race and ethnicity.

The argument embedded in the fake video — and in fact the entire point of faking the video in the first place — is to elevate the idea at the beating heart of the white nationalist movement, which is that people of color are coming to destroy white people. This is how hardcore racists defend their hostility towards racial diversity and their insistence that whiteness should be the main or even exclusive trait defining legitimate American citizenship. This ugly idea, rooted in a belief in white superiority, is recast as an act of self-defense: White nationalists claim they are only trying to prevent "white genocide," which they see as an inevitable outcome if the country becomes more inclusive and egalitarian.

This idea that people of color are secretly plotting to "take over" the U.S. and oppress white people, used to be found only on the fringes of the conservative movement. But bit by bit, Trump has made it central to conservatism and Republican politics. Fox News features a nightly parade of hosts, especially Tucker Carlson, who gravely warn that white people are the real victims of racism and that "Western civilization" (an obvious euphemism) is under threat from immigration.

This sort of messaging preys on ignorance. Yes, our culture is changing, but what Fox News audiences don't understand — or deliberately refuse to admit — is that culture is never static and is always changing. (Did you know Christmas trees used to be foreign to Americans until German immigrants brought them here?) It also relies on feeding the egos of bigots who want to believe that their knee-jerk hostility to difference and their profound incuriosity about other people is somehow deeper and more meaningful than it actually is.

But this kind of rhetoric, framing people of color and immigrants as a threat to white people, leads to support for — and there's no other way to say this — policies of ethnic cleansing.

Overt white nationalists at least admit this, even if they don't lead by saying, "Our plan is to pack all people of color on trains or planes and ship them out." Trump and his more mainstream supporters, particularly Fox News pundits, tend to be more coy about the policy implications of painting entire groups of Americans as inherently suspect based on their race, religion or ethnicity.

But there can be no doubt that Trump is testing the legal limits of ethnic cleansing policies. His administration, especially under the management of blatantly racist policy adviser Stephen Miller, has systematically explored every possible legal method to kick as many nonwhite people as possible out of the country. They've ended TPS status for hundreds of thousands of migrants who Trump clearly sees as not white enough to stay. They're trying to end DACA, a program that gives legal status to millions of people who grew up in the U.S., even though they were born elsewhere. They're trying to fast-track deportation, even though doing so would clearly mean that some U.S. citizens get deported. Trump's administration is basically fine with that, because the point is to evict people who aren't white, whatever their legal status.

Just this week, we heard a horror story about an 18-year-old named Francisco Erwin Galicia, a U.S. citizen born in Dallas. He was held in a detention center for 23 days, where he was effectively starved and tortured, and apparently pressured to leave the country where he was born. (His brother, a Mexican citizen, has been deported.) Galicia had a valid Texas birth certificate, of course, but was held in detention anyway because the Trump administration ultimately believes the white nationalist talking points it's peddling and wants to see how far it can go, under current law, to expel people who don't "belong," whatever their legal status may be.

Even these strenuous efforts are still nibbling at the margins, of course, since the vast majority of people of color in the U.S. are citizens or legal residents. Trump's "go back" comments, which Rubio was trying to defend, in ham-fisted fashion, with his fake video, make clear that Trump longs to have the power to deport whoever he wants. When his supporters chant "send her back," they long for that as well.

So it's no small thing for Marco Rubio (who himself belongs to an ethnic category Trump has targeted) to be tweeting out a fake video that feeds fears that people of color intend to "steal" America and launch a campaign of oppression against white people. Rubio probably just thought it was a quick and easy way to score political points by digging into the conservative myth that they're being unfairly treated by the "liberal media." Instead, he ended up supporting talking points that are gradually turning mainstream American conservatives into fascists.