How Mike Wallace changed TV journalism: "You had to compete" 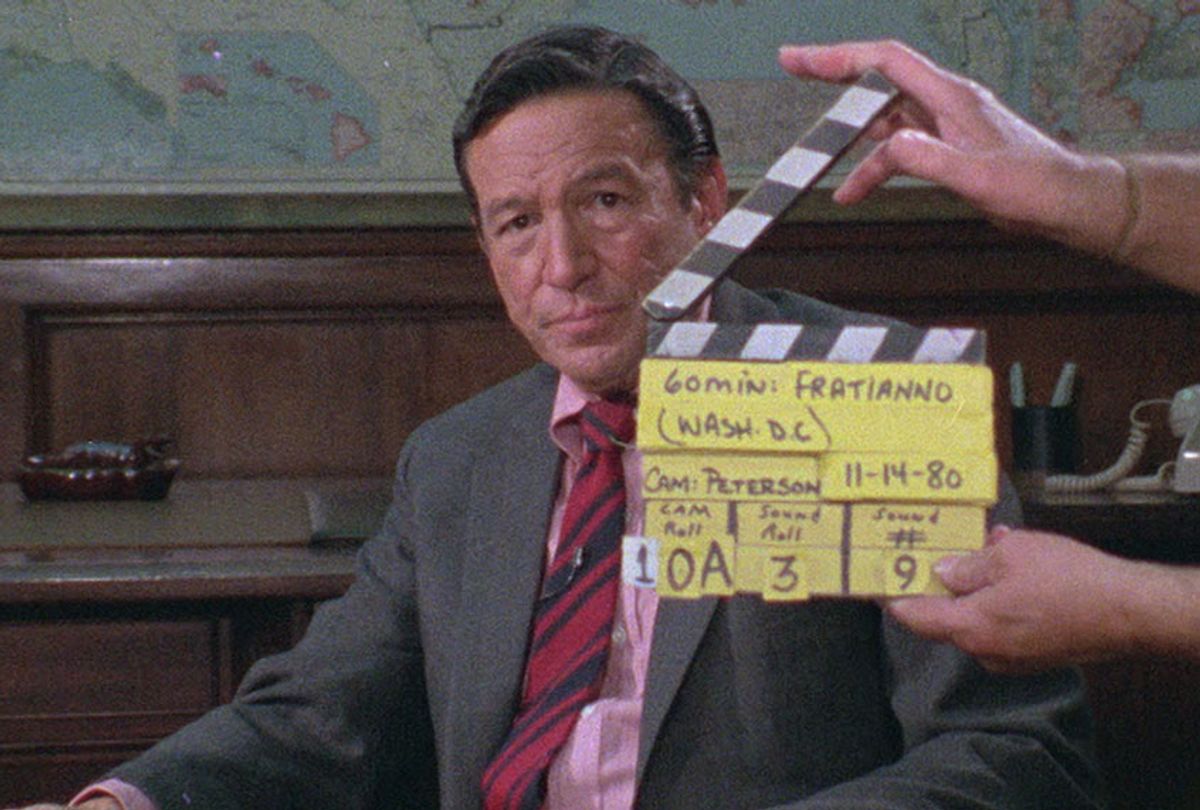 Belkin’s documentary briefly mentions its subject’s strict mother and shows how the acne-scarred youth “discovered his voice,” working on radio and in early television. However, it was Wallace’s hosting of the show, “Night Beat” — and later “The Mike Wallace Interview” — that shaped his career and put him on the path to become a serious journalist. When he went to work at CBS, he got the opportunity to co-host a news magazine for television called “60 Minutes.” And it was, of course, at “60 Minutes” where Wallace honed his style of confrontational interviews, starting with the key players of Watergate, and later turning into investigative stings, and profiles of political figures including the Ayatollah Khomeini.

“Mike Wallace Is Here” briskly shows these highlights from Wallace’s career. Belkin intercuts these scenes with Wallace being interviewed, as well as with Wallace interviewing folks, from Larry King, Bill O’Reilly and Oprah Winfrey to Barbra Streisand, Donald Trump, Johnny Carson, and Bette Davis, among others. (Belkin shrewdly employs a split screen so viewers can see Wallace and his subject simultaneously).

The documentary also probes into some of Wallace’s unhappier moments, from his personal struggle with depression and thoughts of suicide, to his professional tribulations, including a $120 million lawsuit that General William Westmoreland waged against CBS for libel and the nixing of a key interview with tobacco industry whistleblower Jeffrey Wigand.

Belkin, who also helmed the forthcoming true crime documentary series, “No One Saw a Thing,” submitted to a phone interview with Salon to talk about his film, its legendary subject, journalism, and interviews.

Why was Mike Wallace such an appealing subject for you that you wanted to make a documentary about him?

Wow! To tell you the truth, he wasn’t. Every time you start a documentary you go in with a question mark. You have an idea and then you see if it can hold an hour and a half. This film started from broadcast journalism. It was a genesis story. It was about how we got to this clusterf**k. And Mike Wallace was a Zelig character who intersected at all the right moments in history. I wasn’t sure it would hold a full film. But his background and his personal tragedy … I was compelled to tell his story. He’s a fragile person who most of us don’t really know. We have an image of him as a John Wayne tough guy, but he had so many more personal stories that I found interesting.

Wallace died in 2012. Did you ever get to meet him? How did you get the approval to make this film?

No. I came here two and a half years ago with this idea. I needed to find a producer and get access, and back then it was impossible to get CBS archives. But I hooked up with [producer] Rafiael Marmor and he loved the idea. We approached Chris Wallace and I had this idea of doing a Mike Wallace interview through the archives. Chris liked that approach and gave me his blessing. So, we went to CBS with that blessing. They gave us a treasure trove of materials. Over 1,400 hours of footage. It was amazing! We could show the history of the twentieth century through the interviews. I watched it and built this story, but I wanted to [have Wallace] interviewed and have him interview other people. Mike Wallace is aware of his Achilles heels, so he frames his weaknesses in the form of a question to others. That allowed me to sort through the footage through the prism of understanding where Mike is revealing his character through his questions.

Wallace exhibits a few moments of self-doubt or errors in judgment in your film. How do you think someone so able to get others to admit to weakness or wrongdoing was so sensitive about his own shortcomings?

Mike was human. No one wants to be scrutinized, or reveal more that he wants to, or admit that he is weak. No one talked about depression — especially tough men — which Mike was the epitome of. He didn’t admit he tried to commit suicide until [late in life]. People didn’t talk about it. He was human, but it was not the norm.

I think early on he chose career over family. Once he did that — and you see with all the great ones he interviewed, Bette Davis, Larry King, etc., that they did the same thing. They all married multiple times. His family and life were not an influence on his career. His career influenced him — being an absentee father by his own admission. His career was shaped by his insecurities, and that was the driving force behind it, and why he worked to such a late age. His career influenced his life and he chose career over family.

Do you think Wallace had something to prove, as the film suggests — that he was a serious journalist, and not a product of show business?

Mike changed the game. He was at a point where TV came into play and it was more objective journalism. Cronkite was the moral center, and dry. Mike changed journalism. It evolved into more of an entertainment or sport — you had to compete. He was perfect with his credentials as an actor and pitchman and he was a serous journalist and reporter. He prepared for interviews in a meticulous way — giving examples, and dates. He had an agenda and went after it. He was entertaining and enjoyed the spotlight on him. It made him a different animal. He was criticized back then, but today people take him with open arms. He was the change. But I see him as a serious reporter who had star aspirations. He got people to notice a story they wouldn’t have known otherwise.

What is your favorite interview by or of Wallace and why? I loved Oriana Fallaci who says she is a historian who writes history in the same moment as it happens.

That’s the best moment in the film, but it’s not the moment I like best. My favorite exchange is the Arthur Miller [interview]. That’s a real moment of Mike meeting his mirror. They grew up the same time and went to school together and both of their parents lost money in the Great Depression and that shaped their view of life. I have the raw footage. What you see in a minute, but I saw five hours of that exchange and it is riveting.

Oriana flushes out why I did an all-archive film — that exchange between them. Oriana was the female version of Mike Wallace in Europe. She interviewed the big people, was tough, a performer, smoked. When they sat together, Mike asked if she’s a performer — which is what he had been asked his entire life! She says she’s a historian, and he disagrees. This is the same difference between an all-archival film vs a documentary film. I’m documenting things as they happened. It’s not “We miss Mike so much,” I’m letting it play out as it played out.

What do you think makes a good interview?

[Laughs]. Mike has this same question when he asks a young Oprah what she thinks, and the answer Oprah gives is the one Mike gives — that she feels so connected to the audience that she is a proxy for them. Mike feels the same way, asking the questions people at home are not getting answers to. That’s Oprah’s and Mike’s answer.

My answer is that a good interview is based on research and the ability to frame questions that get to the core of the subject. That’s what Mike did and why he was so great. He’s good at that. He has a cat-like instinct to go for the jugular.

Here’s an example: Mike sits with Barbra Streisand and he asks her simply, “What are you afraid of?” He knows Barbra works from that emotion, so it opens up Barbra and she says fear is the energy that gives her the motivation to work. It seems simple, but it’s based on research and it goes to the core of the subject.

The film includes a quote that the press is a yardstick of the nation. There is also a comment late in the film, that there are too many voices today, which dilutes the impact of the media. What observations do you have about the evolution of the Fourth Estate?

That’s an easy question that we can cover it in the minute we have left! [Laughs]. The film doesn’t say his opinion. I like to leave the moral open so viewers can put their own thoughts into it. I think journalism has gone from three outlets to now where you have so many outlets you don’t know who’s a journalist anymore. That definition is stretched. We hear podcasts, see documentaries, and people are getting information from so many outlets. Comedians are the new journalists!

We went from Cronkite saying, “That’s the way it is…” It’s not that way it is anymore! But we’re still in the revolutionary days. I hope people start demanding good journalism now. It’s a two-way street — journalism needs to be tougher and the audience needs to demand it and want it.

What do you think Wallace’s epitaph is?

He says, “Tough, but fair.” What I would say: “He did his best.” I really believe his heart was in the right place.