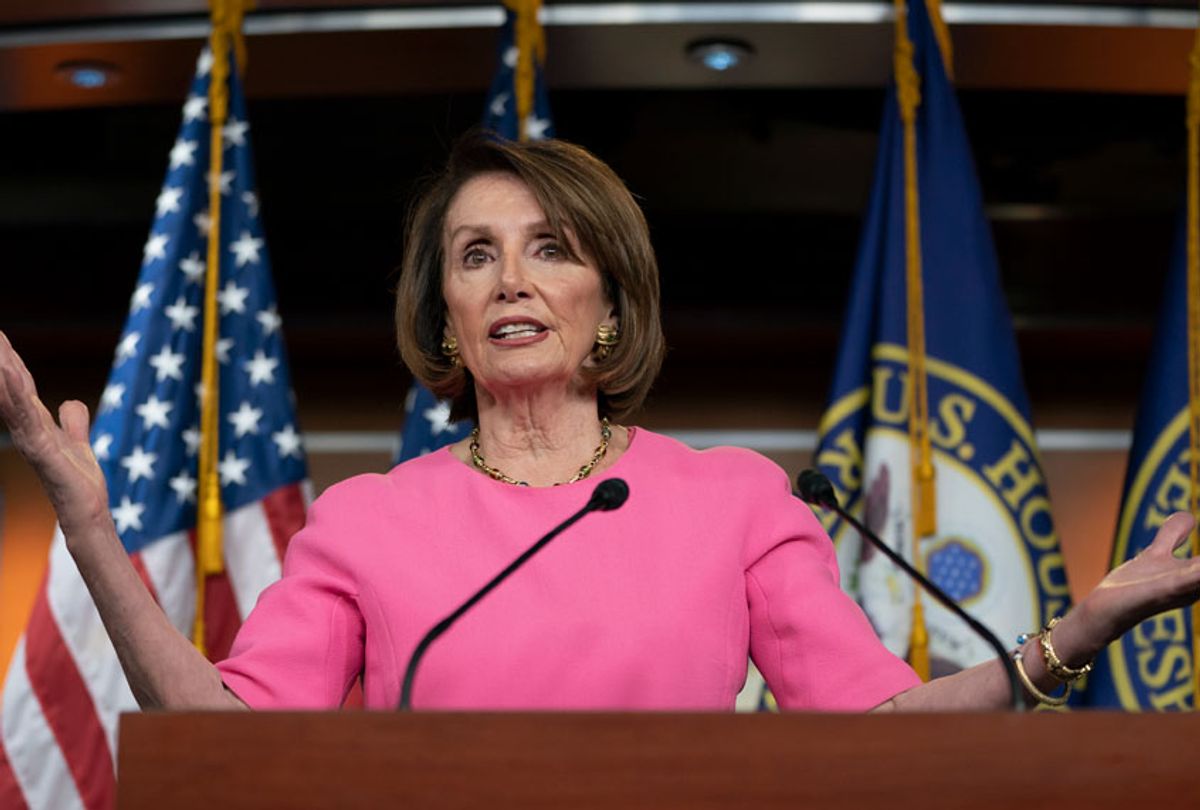 A number of prominent public figures, from Rep. Alexandria Ocasio-Cortez, D-N.Y., to a former Republican president's daughter, are condemning Donald Trump's racist tweets about the city of Baltimore.

The controversy began on Saturday, when Trump posted a pair of racist tweets about Baltimore, a city represented by House Oversight Committee Chairman Elijah Cummings, who has been harshly critical of the president.

Soon thereafter he added, "Why is so much money sent to the Elijah Cummings district when it is considered the worst run and most dangerous anywhere in the United States. No human being would want to live there. Where is all this money going? How much is stolen? Investigate this corrupt mess immediately!"

He followed that up later on Saturday night by writing, "So sad that Elijah Cummings has been able to do so little for the people of Baltimore. Statistically, Baltimore ranks last in almost every major category. Cummings has done nothing but milk Baltimore dry, but the public is getting wise to the bad job that he is doing!" Throughout the day on Saturday he also retweeted several videos that purportedly showed various impoverished areas of Cummings' district.

Trump doubled down on Sunday morning, tweeting that "Someone please explain to Nancy Pelosi, who was recently called racist by those in her own party, that there is nothing wrong with bringing out the very obvious fact that Congressman Elijah Cummings has done a very poor job for his district and the City of Baltimore. Just take a look, the facts speak far louder than words! The Democrats always play the Race Card, when in fact they have done so little for our Nation’s great African American people. Now, lowest unemployment in U.S. history, and only getting better. Elijah Cummings has failed badly!"

He added, "Speaking of failing badly, has anyone seen what is happening to Nancy Pelosi’s district in San Francisco. It is not even recognizeable lately. Something must be done before it is too late. The Dems should stop wasting time on the Witch Hunt Hoax and start focusing on our Country! 'Elijah Cummings has had his chance to address it (crime & conditions in Baltimore) for decades, and he hasn’t gotten it done.' @PeteHegseth @foxandfriends How can he get it done when he just wants to use his Oversight Committee to hurt innocent people and divide our Country!"

In response to Trump's earlier tweets, Cummings posted on Twitter that "Mr. President, I go home to my district daily. Each morning, I wake up, and I go and fight for my neighbors. It is my constitutional duty to conduct oversight of the Executive Branch. But, it is my moral duty to fight for my constituents." From there Cummings issued a call for lowering prescription drug prices.

CNN's Victor Blackwell delivered an impassioned statement on Saturday condemning Trump's tweets, writing that "The President says about Congressman Cummings' district that no human would want to live there. You know who did, Mr. President? I did, from the day I was brought home from the hospital to the day I left for college, and a lot of people I care about still do."

He added, "There are challenges, no doubt. But people are proud of their community. I don't want to sound self-righteous, but people get up and go to work there. They care for their families there. They love their children, who pledge allegiance to the flag just like people who live in districts of congressmen who support you, sir. They are Americans, too."

Rep. Alexandria Ocasio-Cortez, D-N.Y., also defended Cummings on Twitter, telling the story of how "before new members are assigned to Congressional committees, we have to make our case to the chair. Chairman Cummings was TOUGH. I sat down in his office to make my case for Oversight, and I was quite nervous. He looked right at me & said: 'I am going to ask you plainly: Are you here to do the work?' People’s lives are at stake in urgent ways on Oversight. He demanded excellence, & was watching my every word. I said 'Yes' &made my best case incl why & how I wanted to be on the cmte."

She added, "By the end of the mtg, I had no idea if I made the cut. If you look at Oversight, it includes many all-stars of Congress. From @RepRaskin to @RoKhanna, Cummings is a legendary coach who brings the best out of everyone. He makes the country better. You want to be on his team."

Jenna Bush Hager, the daughter of former President George W. Bush, recalled her experiences as a teacher in Baltimore as she retweeted Blackwell's video.

"I taught in West Baltimore. I adore my kids, their parents, and grandparents. They all want the same thing I want for my kids: the chance for their children to have safe, happy and productive lives. Let’s think about the language we use, who it hurts," she tweeted.

House Speaker Nancy Pelosi bluntly described Trump's tweets as racist, writing that ".@RepCummings is a champion in the Congress and the country for civil rights and economic justice, a beloved leader in Baltimore, and deeply valued colleague. We all reject racist attacks against him and support his steadfast leadership. #ElijahCummingsIsAPatriot"

On Sunday morning the Baltimore Sun's editorial board summed up the prevailing view, defending their city before concluding:

Finally, while we would not sink to name-calling in the Trumpian manner — or ruefully point out that he failed to spell the congressman’s name correctly (it’s Cummings, not Cumming) — we would tell the most dishonest man to ever occupy the Oval Office, the mocker of war heroes, the gleeful grabber of women’s private parts, the serial bankrupter of businesses, the useful idiot of Vladimir Putin and the guy who insisted there are “good people” among murderous neo-Nazis that he’s still not fooling most Americans into believing he’s even slightly competent in his current post. Or that he possesses a scintilla of integrity. Better to have some vermin living in your neighborhood than to be one.