This may be the best way to eat a mussel

Choros a la chalaca are the overture to any Peruvian meal. 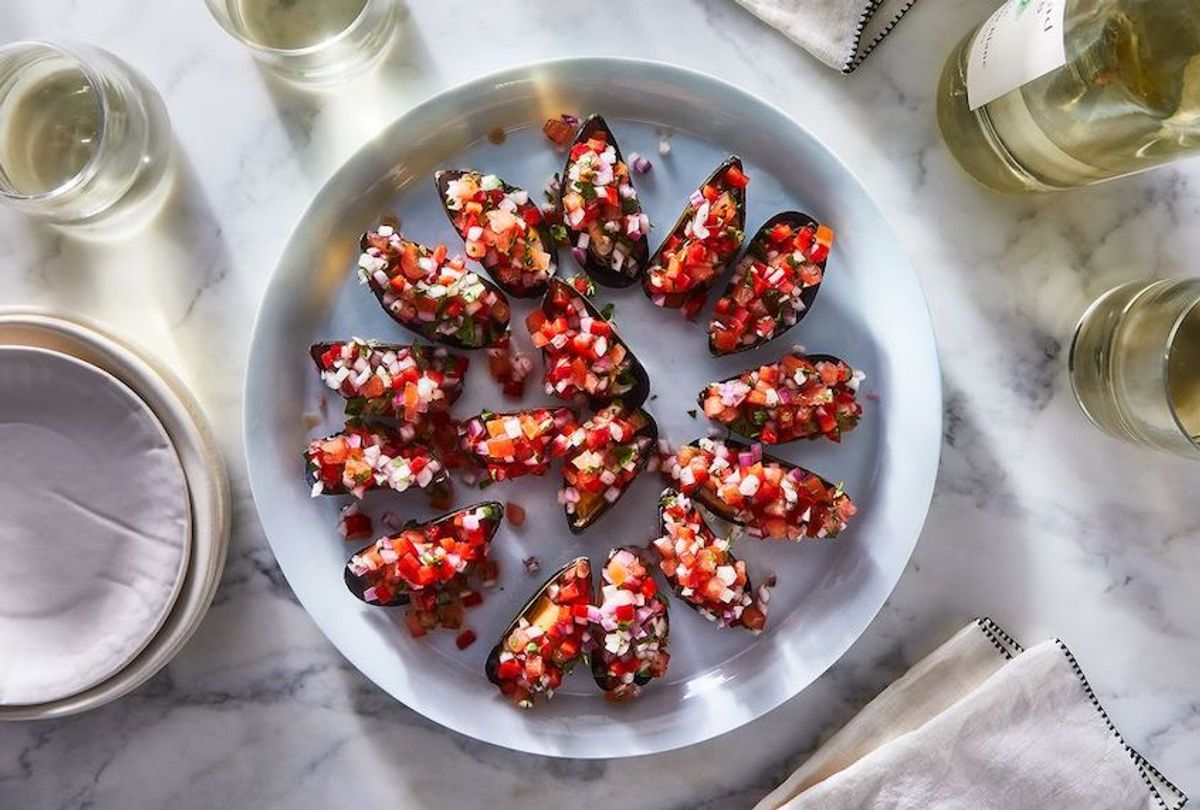 There is nothing like your first time. It can be an annoying cliché, but there is some truth to those words, especially when it concerns food. In thinking about my favorite dishes, I find that those moments when I first tasted and fell in love with it are the ones that have been imprinted in my psyche. As a result, I end up feeling that the best way to prepare any dish should always reflect those magical first times.

While I may bend this personal rule from time to time, there is one particular food that I believe shouldn’t be made any other way. Many people may think of a big bowl of black shells in a puddle of winey broth when they think of mussels. But those people probably aren’t Peruvian.

When I think of mussels, I think of choros a la chalaca. This is a cold appetizer consisting of steamed and chilled mussels on the half shell topped with a relish of finely diced onions, tomatoes, and enormous kernels of starchy Peruvian giant corn, which we call choclo. The mixture gets some zing from lime juice and a touch of heat from rocoto chiles before receiving a fat sprinkle of cilantro, which gives it that hint of clean, fresh flavor.

This dish originated in the port city of Callao just north of Lima. Almost every visitor to Peru visits Callao whether they know it or not since the main airport is located there. The name of this dish is a reminder of its place of origin. Chalaca (or chalaco) is the nickname for anything that comes from Callao. Choros is the Peruvian term for mussels. Incidentally, choros is also a slang term for thieves, so it’s always a good idea to qualify choros with “a la chalaca” to avoid confusion. You can also affectionately refer to them as choritos as few Peruvians will use a diminutive suffix to refer to something unsavory.

Callao has a pretty rough-and-tumble reputation akin to that of Marseilles in France. Growing up, my little brother told my dad that some Peruvian classmates were picking on him because he didn’t speak Spanish very well. My dad instructed him to tell the bullies that he was from Callao, assuring him that they wouldn’t mess with him if they heard that. I don’t remember my brother complaining about them again.

While chalacos may seem a little rough around the edges compared to the more reserved limeños, they also have the reputation of being some of the most fun-loving people in Peru. They are fiercely loyal to their local soccer team, Los Boys. The city is renowned in South America for being a salsa music hotspot. In fact, it was historically the southernmost stop on the Latin American salsa circuit whenever big acts like El Gran Combo toured. As such, chalacos are well-respected for their dancing skills.

Choros a la chalaca is drinking food. Even non-chalacos will order a platter to enjoy with a case of beer, which is a typical way of ordering brews in Peru. I always picture chalacos fortifying themselves with a few mussels and a swig of refreshing local lager in between dancing to their favorite salsa anthems at one of the city’s numerous night clubs.

In my family, my dad always ordered a platter of choritos as the overture to any Peruvian restaurant meal. My brother, who was born with a craving for bold flavors, would gobble them up as soon as the waiter placed them on the table. Even as a small child, he could easily polish off a dozen of the mollusks and always insisted that the kitchen make them extra picante. Having only spent the first year of his life in Peru, his love for this dish was one of the few things that connected him to his heritage.

This was the only way I knew to eat mussels until I became an adult, and I still believe it is the best way to prepare this mollusk. Choros a la chalaca also helped me convince my husband that he actually did like mussels all along but was just not having the best version of them.

In coming up with a recipe for this dish, I did my best to stick to tradition. However, I can never resist the urge to add my own spin on things. I steam the bivalves in a little bit of pisco with onions and garlic. I don’t throw out the cooking liquid but rather reduce it to add to the zesty relish that tops each mussel. This is my limeño touch. It’s completely optional but will only make your choritos that much tastier.

If you’re concerned about my recipe not being entirely authentic, just shout Chim Pum Callao before you take your first bite. Honoring Los Boys while you enjoy one of their hometown’s most celebrated contributions to Peruvian cuisine will ensure that your choritos are thoroughly chalaco.

1. Add the onion, water, pisco or vodka, and garlic cloves to a large saucepan and cover. Bring to a simmer over medium heat and add all the mussels. Cover the saucepan and cook for 5 minutes.

4. In a separate bowl, combine the diced red onion, tomato, rocoto, cilantro, choclo, lime juice, and 2 tablespoons of the mussels’ cooking liquid. Season with salt and pepper to taste. You can also adjust the acidity and spiciness by adding more lime juice and chiles. You can store the mussels and the topping in the refrigerator for several hours until you are ready to serve.

5. When you are ready to serve, break off half of the mussel shell that is not attached to the meat and discard. Arrange the mussels on the half shell on a large platter and top each mussel with a teaspoon of the onion mixture. Serve cold.

Note: Choclo is a variety of corn native to Peru and its neighboring countries. It is often called Peruvian giant corn because each kernel is about the size of a thumb print. You can find imported frozen choclo at many Latin American markets. Unlike North American corn, choclo is very starchy (like a potato) and not sweet at all. The flavor and texture are irreplaceable, so if you cannot find choclo, simply omit it from the recipe.