Are Democrats ready to fight? The signs aren't promising — this week's debates are crucial

Mueller's testimony was a fiasco for Democrats, who have forgotten how to make an argument. It's not too late 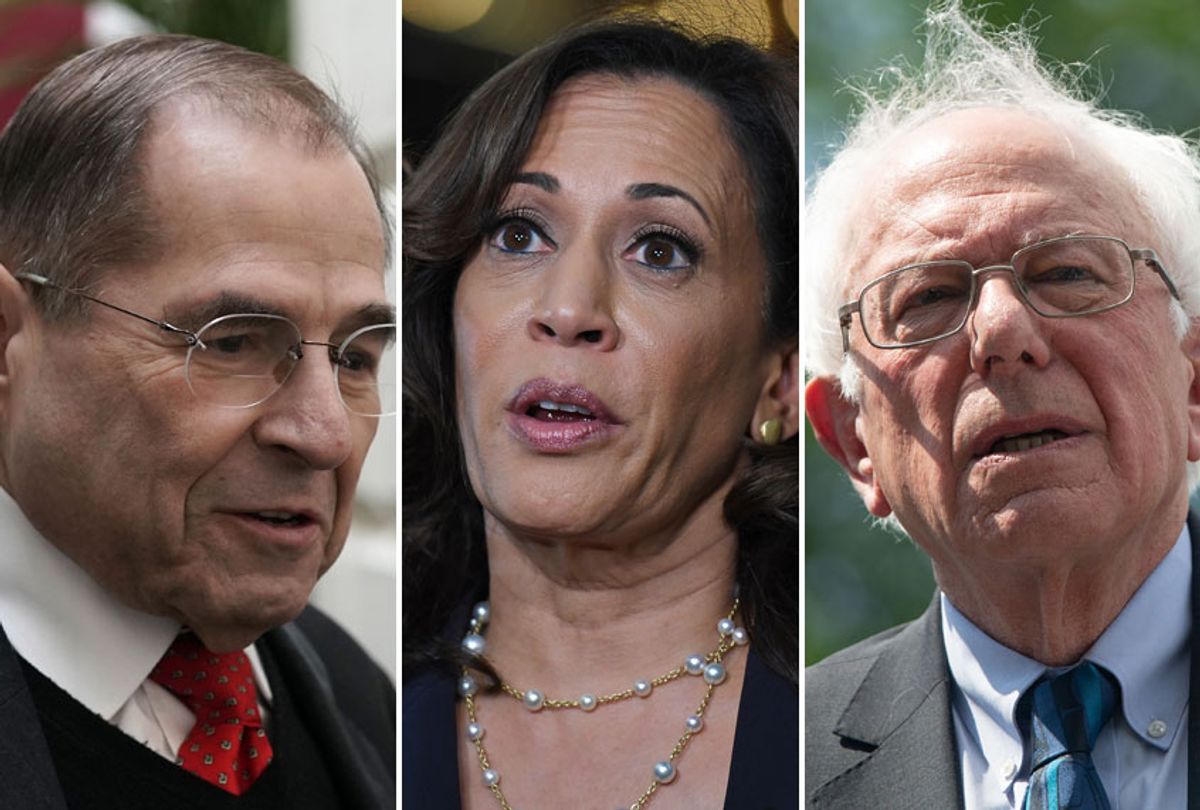 Unusual times demand unusual measures. If you value Salon's original reporting and commentary, please take a moment to support our writers directly. Right here, right now, you can make a financial contribution to Bill Curry to help make his work possible. Every dollar you give goes directly to our writers — Salon doesn’t take a cut.

Seeing House Republicans flog Robert Mueller nearly to death last week, I felt sick, almost as if I were watching a surveillance video of elder abuse. I waited for Mueller to rise to his own defense, or for some Democratic Samaritan to fly to his rescue; to my sorrow and amazement, none did.

Someone, a consultant no doubt, told the Democrats to stage the hearings like the movie version of the book; to never ask a question if they didn’t know the answer and, above all, to stick to their scripts.  For a week before the hearings you could hear this inane counsel regurgitated on cable TV; it was a sure sign of trouble ahead.

In the movies, actors don’t read aloud from scripts. The point of a hearing is to learn new facts. When a plan falls apart, innovate. Like second graders in the world’s worst Christmas pageant, Democrats stared straight ahead and stiffly recited their lines as Republicans set Mueller on fire.

They should have exposed every lie. Christopher Steele, a retired British intelligence officer, was more loyal to America than the Republicans who repay him with slander. Nothing in his dossier has been disproved. Mueller’s inquiry was overseen from first to last by Republicans; no one has cited any instance of staff bias affecting its findings, and on and on.

It’s a tired trope, but imagine if Hillary Clinton had hired a Putin apparatchik to run her campaign, that the apparatchik then slipped polling data to a Putin pal, that Clinton sought Putin’s help in a Moscow real estate deal, that she called publicly on Putin to steal Trump’s emails, that Chelsea Clinton then met with a Russian who promised dirt on Trump and that Hillary had Chelsea lie about it, that Hilary’s aides met with Russians and then denied it under oath.

Republicans would talk of nothing else. They’d call Clinton’s actions treason. They’d impeach without hesitation, and they’d be right. Every American would know that Clinton and Putin had stolen the election. The whole world would chant "Lock her up." Democrats take a different tack.

Their mishandling of Mueller is but an example of a problem they urgently need to solve: their inability to frame and sustain a public argument. They can neither attack nor defend, adduce facts or employ logic. Approaching the most crucial debate since the founding, they couldn’t talk a dog onto a meat truck.

Debate itself is dying along with civic culture. You never hear the phrase "ad hominem attack" anymore; so many arguments are ad hominem it hardly seems worth pointing out. At the Mueller hearing, the entire Republican presentation was an attack on the character of Justice Department and FBI civil servants, but no one thought to say so.

You don’t hear the phrase "plausible deniability" much either; denials don’t have to be plausible anymore, only brazen and unflinching. Clinton and Nixon were impeached for lying; it is unclear that we care enough about lying to impeach a president for it today. Trump’s the greatest proven liar in our history and for that alone should be impeached, but I can’t recall hearing anyone else suggest it.

Imagine if the Washington Post caught Hillary Clinton in 11,000 lies. Mitch McConnell would lug a digital display to every press conference. Every American would be tracking the numbers. Twenty Democratic candidates for president in two debates in Miami, and not one so much as mentioned it.

It doesn’t help that the whole world came down with an acute case of attention deficit disorder. Democrats started out the year calling climate change and public corruption their top priorities. Yet whole months go by with no one tending those fires. Not even a burning planet can compete with the lure of Trump. The name of the game is shiny object journalism and you can’t win if you don’t play.

A member of Congress who spends half of each working day asking rich people for money has no time to read and so knows less about policy than you’d hope. Mueller seemed unfamiliar with his own report. If members had any better handle on the material, they hid it well.

Democrats long ago forgot how to defend themselves. In 1988 Michael Dukakis blew a lead to George H.W. Bush by ignoring smears like the infamous Willie Horton ad. Young Dukakis aide George Stephanopoulos later said the lesson Democrats learned was never to let attacks go unanswered. He was right, except for the part about Democrats learning. Twenty years later, Obama let the birth certificate libel go largely unanswered for three years out of what appeared to be mere Dukakis-like disdain.

Part of the pain of watching the Mueller hearings was post-traumatic stress from the Brett Kavanaugh hearings. On that fateful day just 11 months ago, Christine Blasey Ford’s calm, compelling morning testimony nearly sank Kavanaugh’s nomination. Republicans stole it back that afternoon, by attacking not Ford but the hapless Democrats.

The worm turned when Sen. Lindsey Graham brought hellfire down on the Democrats for the (alleged) sin of leaking. It’s Washington’s favorite form of communication, but Graham got more riled up over it than the Democrats did over Ford’s far more credible account of a sexual assault. When Sen. John Cornyn asked Sen. Dianne Feinstein if her staff had leaked a letter, she said she hadn’t thought to ask them. It was all downhill from there.

Democrats only debate policy when they have to. The 2016 campaign revealed deep fissures between the party’s elites and its base on trade. Three years later they haven’t even tried to find common ground, dithering as the British Labour Party does on Brexit. Like new British Prime Minister Boris Johnson, Trump survives because he operates in a policy vacuum. On issues from trade to border security to foreign policy to education, Democrats have lots of dots to connect before they can feel confident of beating him.

The Democrats’ biggest problem is their devotion to their donors. Every day they wake to the same challenge: how to persuade both the wealthy and the middle class that they’re on their side; how they can "save" the middle class without forcing systemic change on powerful institutions. The problem is, it can’t be done.

The great Medicare For All vs. Public Option debate shows the price Democrats pay for their dual loyalties. As I wrote last week in Salon, a public option may be the surest, fastest road to universal health care. But not if you treat it as an end in itself, as Joe Biden seems bent on doing.

A public option could lead to single-payer health care only if it began by adopting a European-style system for regulating or negotiating all drug prices, not just Medicare’s, and ending Obamacare subsidies of for-profit insurers; a nice start to putting an end to corporate welfare. But Biden, Kamala Harris, Pete Buttigieg and a dozen others can’t even say such a thing because they raise money from those very industries.

Leaders who accommodate corporate corruption must rely on a politics of gestures, symbols and catharsis. It accounts for the sharp uptick in the showy displays of moral superiority we call "virtue signaling." We must all stand up to bigotry. But Walmart does more than any bigot to suppress the wages of people of color, not because it is run by bigots but because it is a global retailer and that’s what global retailers do.

Pay-to-play politics partly explains the self-sabotaging attacks on Biden by Harris and Cory Booker. Biden’s great flaw is that, like Hillary Clinton, he’s too dependent on his donors and too in love with past Democrats to see the holes in the system they built together. But Harris and Booker are in this regard too much like Biden to hold him to any kind of account.

In this week’s CNN showdowns in Detroit, Harris and Booker are expected to attack Biden on racial issues. It’s a mistake, in part because their views on the issues they fault Biden on — busing, crime and working with racist Republicans — are hard to distinguish from his.

When Harris fired at Biden in Miami, he lost ground and she gained it, probably due to his Mueller-like responses and her instinct for the jugular, which Democrats would like to see trained on Trump. Biden has since rebounded, especially in general election polls in which his lead over Trump has actually widened, relative to the rest of the Democratic field. Harris and Booker should take it as a sign.

Luck of the draw has Biden facing Harris and Booker on Wednesday, which means he won’t see Elizabeth Warren till September. That’s the debate Democrats need to have. Every Democrat is decent on issues of race, gender and identity. Not every Democrat is decent on corporate corruption, or even close. In a 20-odd person field, Warren and Bernie Sanders are the only candidates with a real chance of winning who are.

Warren and Sanders meet Tuesday in the other marquee matchup. Progressives will be watching closely, knowing they may eventually be forced to choose between them. Sanders prides himself on his positive campaigns; not one attack ad in all of his races for mayor, Congress and Senate. Warren is only slightly more pugnacious in debate. It will be a love match, but viewers will look for clues as to which of them is better prepared to take on Biden, and ultimately Trump.

Politicians have a right to their ambition. These candidates have no duty to agree, only to flesh out their differences in a way that makes later agreement possible. The party will pay a price for its inability to cohere a vision, make a case or engage in combat. Pundits talk about Trump’s media savvy but the real problem is the Democrat’s inability to debate.

To beat Trump, the Democratic nominee must unite the party behind a compelling vision of political reform, economic security and social justice. The vision won’t come from donors, pollsters or consultants. It must be concrete, specific and embodied in a platform. Party leaders will appoint a committee to draft one, but the real drafting happens in these debates.