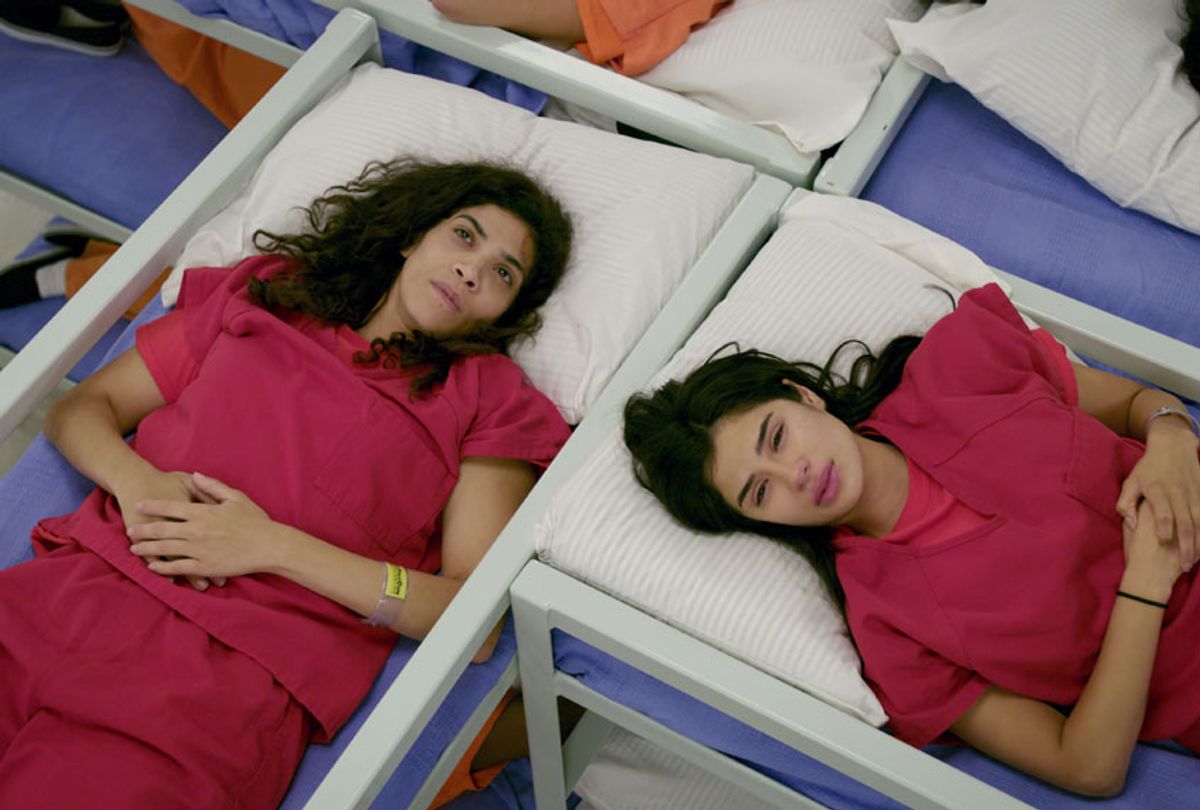 Ignoring Blanca Flores at the very beginning of “Orange Is the New Black” may have been easy for many viewers, particularly those drawn to its story under the impression that they were following its white, middle-class protagonist Piper (Taylor Schilling). As a frightened, bewildered Piper clumsily acclimates to the ecosystem of Litchfield, Blanca, played by Laura Gómez, appears to be an extreme example of prison’s perils. Unkempt, her dark eyebrows raging outward from her forehead, the only part of her that’s louder are her shrieks at what many assume to be an invisible devil.

Warning: The following story discusses key plot points from episodes in Seasons 6 and 7 of “Orange Is the New Black." If you haven't seen all of these episodes, stop reading now.

We soon find out that Blanca, a Dominican woman who was in the process of getting her immigration paperwork when she was arrested, is one of the smartest and most principled people in the minimum security prison that used to be known as the Litchfield “camp.”

When the guard system changes, she adapts and resists by capitalizing on her rumpled appearance to prevent herself from being groped. When the conditions become untenable for all the inmates, she is the first to put her body on the line and lead a protest that eventually becomes a riot.

By way of this bravery, Blanca and Gómez move from the periphery of the narrative to the center. Sadly, this is not for the happiest reasons. In a major twist at the close of season 6, as the corporation that now owns the prison decides to release a few inmates early to save money, Blanca is one of the brown women handed over to U.S. Immigration and Customs Enforcement officials.

In that horrifying moment, series creator Jenji Kohan announced Blanca as one of the central stars in the finale season of “Orange Is the New Black,” our portal inside of immigrant detention.

In a phone interview with Salon conducted in the days prior to season seven's debut, Gómez revealed that the sixth finale's twist was as much of a shock to her as it was for viewers to witness. “Season seven is the only time where I knew in advance what they were sort of planning to finish with,” she said. “At the end of season six I knew that something was building up because the writing in a lot of places felt edgy and dangerous. I just didn't have any idea that it would be this, um, complex.”

Gómez went on to add, “It was emotional but, in a way, I was very grateful that we were going to really grab the bull by its horns. Because it's a reality that we are dealing with right now, but nobody wants to fully pay attention to. I think it's just too painful to admit this is happening as we are living our lives. And it's just too harsh for people in this country to accept, to process.”

And this storyline is one to which series executive producer and writer Carolina Paiz has a specific connection, having grown up in Guatemala during that country’s 36 years-long civil war.

“When we started this story, we had maybe 20 different immigration stories that we wanted to tell,” Paiz told Salon. "We knew we couldn't tell them all. And so there was a constant debate about which ones to show and what our priorities were, and which were better stories for our characters. I think we landed on the right ones and we told them in different ways.”

When the writers began developing this storyline and shooting it, images of overcrowded, filthy and inhumane conditions at border detention centers had not yet gone public. The fictionalized facility, by comparison, looks like a profoundly subpar hostel. This is still TV; of course, the women have beds and regular food service, although as the regular PolyCon inmates serving the food point out, the ingredients are often rotten.

For any actor reaching the end of her character’s story, saying goodbye can be a tough experience. But Gómez admitted that the ICE storyline made closing the book on Blanca especially exhausting. She likens the day-to-day experience of portraying this storyline to feeling like she had run a marathon each day.

“I'm usually very capable of separating one thing from another. However, you know, the difference this time is that, again, this is not something that happened or that it's fictional. It's something that we're living through and we're kind of mirroring society right now. I'm not quite capable of ignoring the news. So I've had a very difficult year in terms of, like, I've had a sleeping disorder that’s gotten worse than it ever has been.”

She added, “I wonder if it has something to do with the chaos that we're living through as a society, you know? I know it affects me a lot.”

The ICE storyline is indeed depressingly relevant in 2019, but according to Paiz, Kohan declared her intent to explore this element of the prison system back in 2017.

From there the writers gained access to ICE processing center in Adelanto, California, on multiple occasions between May 2017 and May 2018.

“I think we all went into it imagining a version of the minimum security camp that our girls had been in for the first five seasons, but a little bit looser,” Paiz said. “Then when we got there, we were all kind of shocked to realize that it was not only an exact replica of the maximum-security prison, but it was in many ways worse, in that they weren't granted the basic criminal rights that you would imagine would be accessible to anyone, including the right to an attorney, the right to a free phone call. It was an illuminating experience that started our journey into research.”

Among the consultants the writers enlisted were attorneys, people who had been trafficked and people who had crossed the border in various ways. “We obviously did a lot of reading, but there was a lot that you can’t get from reading that we certainly did get from one-on-one interactions with a lot of people,” Paiz said.

The substance of these stories went into developing a few key characters within the detention center, some of whom receive illuminating flashbacks revealing the circumstances that brought them to the United States and these facilities.

Episode 11, “God Bless America,” pointedly counters the inaccurate, bigoted narrative surrounding the immigration crisis by zeroing in on the backstories of several detainees we’ve gotten to know. One is contending with the aftermath of a horrifying assault, fighting to determine what happens to her own body. Another fled from her family and the country of her birth to escape an honor killing.

Karla (Karina Arroyave), a detained undocumented immigrant from El Salvador, is desperate to be reunited with her children, who are all she has left after losing her husband. Karla’s understands and knows how to use the software to which detainees have access, but very few understand enough to operate.

Paiz explained that she is based on two real people with whom the writer met. One is an immigrant who learned how to research the legal system while he was in the prison system. The other is a Guatemalan detainee whose children were put up for adoption because, Paiz said, due to her detainment, she was deemed unable to care for them and therefore an unfit mother.

Through Karla, Blanca finds a way to work the system, enabling her to battle the immediate deportation that is the fate awaiting most detainees.

Then there’s the surprise return of Maritza Ramos (Diane Guerrero), who happened to be in the wrong place at the wrong time without identification, only to discover in the most nightmarish way possible that what she knows about her nationality status may not have been true. Guerrero also has an emotional connection to Maritza’s storyline in that her own parents were deported.

Even in this story thread, however, “Orange Is the New Black” makes its point while staying the course with its other mission of contrasting privilege and pain. For all of its miseries, Blanca’s experience in Litchfield preps her to navigate the politics and egos within ICE detention to get what she needs and defend herself before the judge.

“Orange Is the New Black” has never guaranteed happy endings for any of its characters, beloved or peripheral.  This holds for the women in ICE, several of whom count on the presumed truth of that durable American myth guaranteeing liberty and justice for all only to be deported, some presumably to their deaths.

Blanca, however, succeeds in her mission to attain her freedom and her immigration papers, only to fly to Honduras in order to be with the love of her life, Diablo, in the country to which he has been deported. Paiz actually sees this as an optimistic outcome.

“For me the silver lining is, and I said this in the room, Blanca being deported was often referred to as sort of a tragic ending. And to me, as a Guatemalan citizen who's still tied to family in Guatemala and who spends a lot of time in Latin America, I was like yes, it's very bad that she has departed the U.S.,” Paiz said.

“Life doesn't end with deportation, because she is with the love of her life,” Paiz added. “Despite the crime and despite the horrors, we can be happy in Latin America and we can ... maybe find a different kind of life for ourselves. America does not have to be the answer every single time.”

Gómez agreed. “Life has been really tough for this woman, for Blanca, and unfair. But there was always that element of love,” she said. “I always joke that it's the most stable relationship of them all, between Blanca and Diablo, the most unlikely pair.  I think we have a little bit of an unconventional ending and unconventional happiness. And so that happiness, that comes from choosing her situation instead of it being imposed on her."