Trump's assault on Cummings signals a new pivot to full-on racism: It's ugly, but it won't work 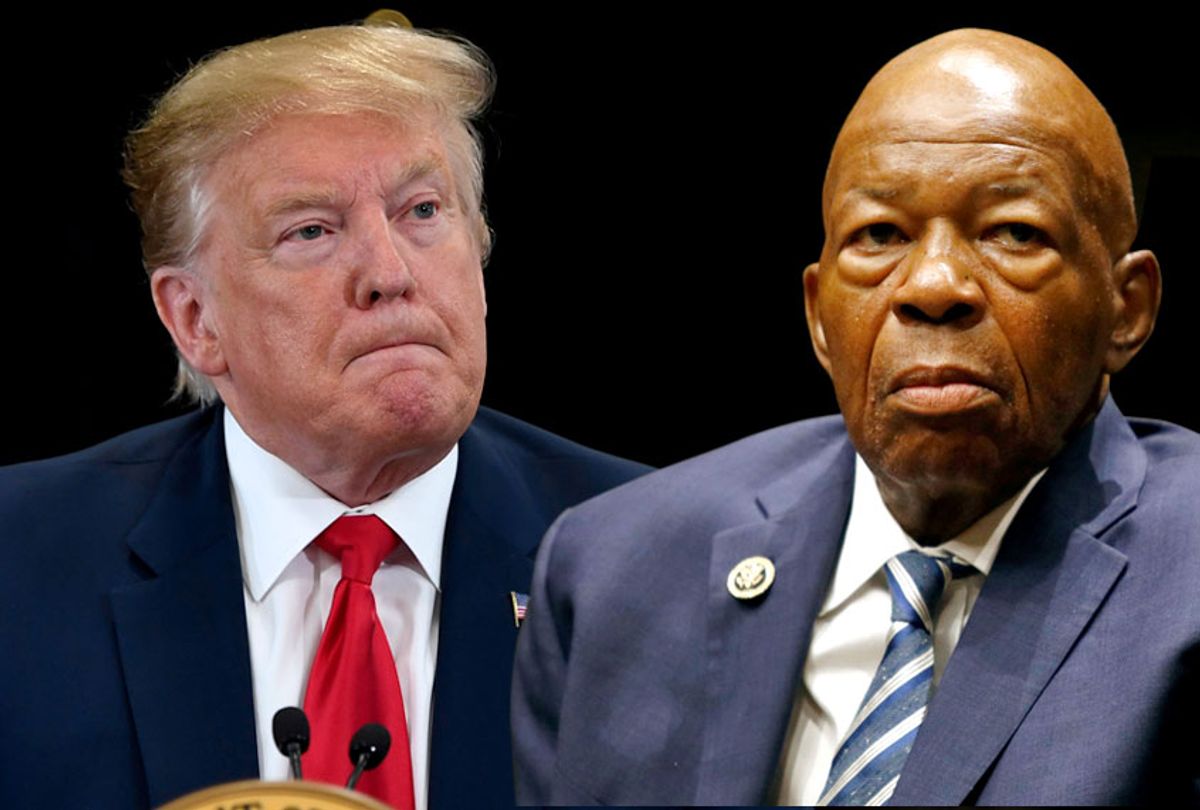 If anyone still clings to the notion that President Trump issued his racist broadside against "the Squad" a couple of weeks ago as a clever divide-and-conquer tactic against the Democrats, they were disabused of it this weekend. It's true that Trump had pretended to be taking Speaker Nancy Pelosi's side in a dispute with the young first term women of color, but only as an excuse to do what he wanted to do anyway. Fox News had been demonizing the four women for months and Trump is certainly tuned in to the right-wing zeitgeist.

Any lingering questions about Trump's motives were extinguished when he launched another racist assault on Saturday, this time on the highly respected chairman of the House Oversight Committee, Rep. Elijah Cummings of Maryland:

That was just the beginning of a fusillade of grotesque insults Trump sent throughout the day and again on Sunday, while trying lamely to bring Pelosi into it again and failing. He also sent out his surrogate, acting White House chief of staff Mick Mulvaney, to defend his comments and insist that the president's racist statements weren't racist and that he was just "fighting back" against someone who had wrongly insulted the Customs and Border Patrol for its deplorable treatment of children in the filthy border camps. Trump apparently didn't think it was appropriate for this African American committee chair to bluntly criticize Kevin McAleenan, Trump's acting director of Homeland Security. He didn't use the word "uppity" but it was implicit in his rant.

The debate raged on throughout the weekend as these things do, with some dramatic testimony by CNN anchor Victor Blackwell that immediately went viral.

According to the Washington Post this divisive race-baiting will be at the center of the president's 2020  strategy:

As condemnations have poured in over the past two weeks accusing Trump of bigotry — including a bipartisan House resolution decrying his “go back” tweets as racist — Trump’s campaign has mounted an all-out effort to defend the president and turn his offensive comments into a political advantage with his base.

“This is Hillary’s ‘basket of deplorables’ all over again,” said Trump campaign communications director Tim Murtaugh, referring to a term Hillary Clinton used to brand some Trump supporters as bigots in 2016. “They’re trying to say anyone who supports this president is racist.”Trump, who turned the “deplorables” label into a rallying cry for his base, is seeking to do the same in 2020 as he tries to retain support in key Midwestern swing states.

Trump's latest ravings came on the heels of a "Fox and Friends" segment that took Cummings to task for his questioning, and the idea of insulting his district came directly from there. So it appears that the Trump campaign can depend upon Fox News to provide the talking points and memes for Trump on a daily basis. (He doesn't like to be "briefed" or to read anything so this is probably the best way to keep him on message.) If all the predictions of foreign interference are true, we can expect that Trump-supporting American adversaries will once again be exploiting the fault lines that Trump's racial demagoguery opens up.

Trump's strategists know they don't have much choice but to go with it: It's clear enough that these racist assaults reflect Trump's true beliefs and he's incapable of hiding them. So they will make this the most divisive election they possibly can, perhaps in hopes that their base will be thrilled and at least a few other voters will be so turned off by politics they will simply drop out.

As Perry Bacon at 538 points out in this piece, we really don't know if they are right. There have been a number of studies done around the 2016 and 2018 elections and the results are inconclusive.  The one data point that seems to be incontrovertible is that partisanship is the single most important reason people vote. Trump was the Republican nominee and so Republicans voted for him, especially since he was running against a person that the GOP's older base had hated passionately for decades.

According to the Atlantic's Ron Brownstein, opposition to Trump has hardened, largely as a result of his aggressive bigotry. Young people, minorities and college-educated white voters, especially women, will never vote for him. He has another problem that wouldn't be a problem if he weren't such a belligerent demagogue: people who are happy with the economy aren't necessarily going to vote for him.

Brownstein explains that means Trump has to goose turnout among those receptive to his "exclusionary racist and cultural messages" to epic levels. Those would be the conservative evangelicals, older, rural and non-college educated whites. The problem is that one big subgroup within that faction is shrinking: non-college-educated white women.

These women are vital to his re-election prospects. They have voted solidly Republican for more than 30 years (with the exception of Bill Clinton) and voted for Trump by more than 27 points in 2016, according to exit polls. But they favored Republicans in 2018 by only 14 points, and Trump's job approval rating among them stood at just 50%.

Brownstein cites recent focus groups by Stanley Greenberg, who has been tracking the sentiments of white working-class voters since the 1980s,  showing that blue-collar women are questioning Trump. They don't like his divisiveness and they don't believe he's delivered any material benefit to their lives. While the blue-collar men have all rationalized Trump's behavior in order to support him, the women have not, using words like "intolerant" and "ignorant" to describe his behavior.

Brownstein writes that "after playing video clips of Trump’s salvos against immigrants and 'socialists' to the women in his focus groups, Greenberg says he flatly does not believe that Trump’s heightened racial and ideological attacks will work with them: 'I came away utterly unafraid of him playing the immigration card in its most extreme form.'"

Trump needs to get every single Trump voter from 2016 to vote for him and hope that the Democrats are unable to rally their own base in the urban areas of the states where he eked out a victory in the Electoral College.  He can't count on the economy to get him over the line. He certainly hasn't delivered on any other benefit he promised. The only thing he has to offer is racism, bellicosity and political incorrectness — all of which are offensive to one very important voting bloc without which he simply can't win. Donald Trump is in an electoral bind of his own making, and there's no obvious way for him to wriggle out of it.