A new "Veronica Mars" mystery: Where can the show go from here? Its creator has some ideas

SPOILER ALERT: Salon talks to series creator Rob Thomas about his plans for the future after that shocking twist 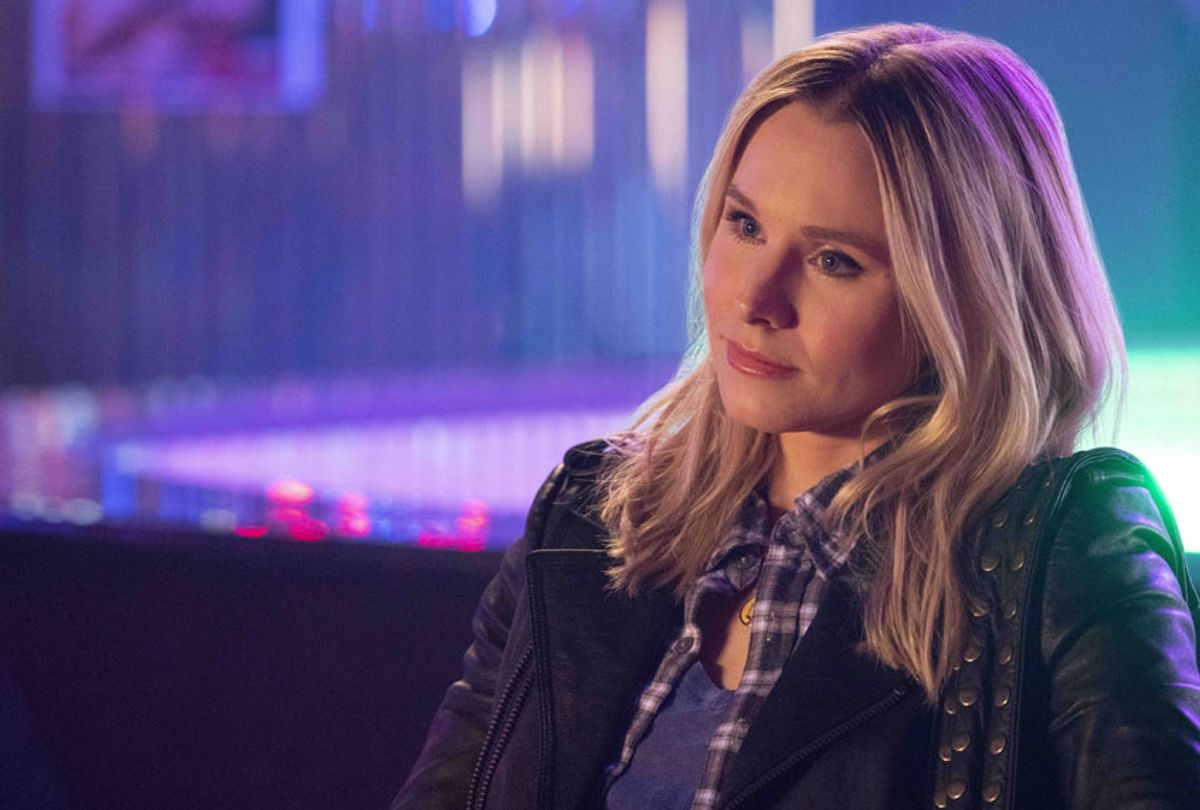 By now, most “Veronica Mars” devotees are either recovering from having their hearts ripped out or bracing themselves to contend with the tragic twist that closes the fourth season. Veronica, as Rob Thomas created her and Kristen Bell plays her, is a woman who armors her emotions against the worst, even to the point of resisting real love when it knocks and asks to be let in.

(Warning:  From this point forward, this article specifically refers to a plot twist that occurs at the end of the fourth season. If you haven't watched all of the new season, stop reading now or don't blame us for what you find out!)

This is why people love Logan Echolls, Jason Dohring’s reformed bully who evolved over the years into a considerate, loving, patient mate willing to accept Veronica exactly as she is. And this makes Thomas’ choice to kill off Logan in a way that ensures he’ll never come back, either worthy of respect for its artistic bravery or completely cruel.

For the entirety of season 4 of “Veronica Mars,” now streaming on Hulu, the story appears to imperil Veronica’s father Keith Mars (Enrico Colantoni), who has reduced mobility and exhibits memory loss. Turns out that in the way of all classic mysteries, this was a misdirect.

At a recent Hulu press event that took place at the Television Critics Association’s summer press tour, currently underway in Los Angeles, Dohring admitted that, “initially I was disappointed, and a bit heartbroken, obviously.”

But he added that Thomas laid out the reasoning behind the decision, helping him to process parting ways with a character that has in many ways launched his career.

“I credit rob for just making an interesting character that straddles that line both on the plus side and the minus: for every irredeemable act, he commits a heroic act around the corner. I think it's a big person who can maybe turn his life around despite being dealt a few bad hands.”

He goes on to add, “And you know a significant amount, in Logan's case, was to be able to turn that around not only for himself but then to turn around and try to help someone he loves to achieve her potential. That he cares about what she really wants, wants her to chase her dreams and to be happy.”

In case Dohring’s charisma and appeal doesn’t come through in that quote: suffice to say, people are going to miss Logan.

Hulu has yet to officially pick up another season of “Veronica Mars,” but hopes are high and Thomas plans to style her future adventures after the great mysteries and detectives found in Agatha Christie’s oeuvre.

However, in sitting down for an interview with Salon at that same event, one that has been lightly edited for length and clarity, Thomas had no second thoughts about his decision to kill off Logan and end LoVe, the fan shorthand for the show’s central couple. “I knew that this day of reckoning was coming,” he said.  “I knew that Logan was a beloved enough character that killing him was going to cause a segment of the fan population to lose their s--t. It's not something that I wanted to happen, but I knew that it would.”

Was a death necessary at this point in the story? What purpose does it serve? Did you feel a need to raise the stakes?

Does this disconnect her from Neptune entirely?

Oh, it's certainly not entirely. As long as Keith is there, she's going to be connected to Neptune.

Truthfully, I have not figured out what the next season will be, exactly. The thing I know is that I want to lean hard into it being a mystery show. I told Hulu when we pitched it that I view this season four as a bridge season to take us from what the show was to what the show will be.

So I want to lean really hard into what I think the show will be in this next season. I think it will be definitively a mystery show. I'm not saying that you won't see friends of Veronica in it, but there will be no doubt what genre of the show we're doing.

Part of show's history is that right after the third season, you pitched to Dawn Ostroff, the head of The CW at that time, “Veronica Mars, FBI.” And of course, we saw Leo [Max Greenfield] come in as an FBI agent. Do you think that might be a part of her next incarnation?

No. I want to keep her as a private eye. That I'm sure of.

I like the stories better. I like that you're your own boss. I think the ways into that story are more interesting. Among the things that I think are not necessarily positive traits about Veronica are her vigilante tendencies, and I think that works better as a P.I. than they would as like a Clarice Starling type character.

The reason that we tried that FBI spin-off, I mean it would've still been Veronica Mars was because that particular year the CW had mentioned to me, "Hey, any chance you want to write a young FBI show for us?" I had sort of turned down that idea. Then when it became clear that “Veronica Mars” wasn't coming back, I sort of said, "Well, wait a minute, what if I give you your young FBI show with Veronica?" And so, that's how we ended up doing that, more than my desire to put Veronica in the FBI.

Speaking of that history with CW, and maybe I'm remembering this incorrectly, but the first two seasons, of course, were very serialized with Veronica returning to one original mystery and while building out the story of her relationships in subplots. But in the third season there were several mysteries and was very heavy on the various teen romance plots. If I recall correctly, didn’t the executives kind of encourage that change in its final season on the CW?

We knew if our numbers didn't pick up it would be our last season . . . I've seen fans want to blame the format shift on the network when I was as or more responsible than anyone else.

. . .  One of our fears was that every season we started a big new mystery, and if you're not in there on episode one, people don't catch up. And it wasn't in the days where you could just watch it like on 18 different formats with devices.

That's actually why I was asking that question. It seems to me that on Hulu and other streaming services the serialized format works a lot better because of that bingeability. So when we're looking into the new season, which I'm going to presume there is, with those mysteries, is that something that you're going take into account? Are those mysteries going to be extended? Do you want to have more of them throughout the season or do you feel like now that you're on a format where binging is encouraged, you have the luxury of carrying out a single arc?

They're all going to be single big cases from now on. There won't be the mystery of the week. I don't think we'll ever go back to that. I think this was the model that we will have moving forward. One big mystery.

I'm glad to hear that. One last question: Veronica has always been styled as a noir detective and when you think about the great noir detectives, most of them are single except for, if you think of like [Dashiell Hammett’s] “The Thin Man.”

Part of the noir genre, that feel, is that there's an element of unhappiness to each of them that they can never quite be satisfied, that there's the pursuit of someone or something that they can never quite get. Is that what we can expect for Veronica from this point onward? I guess another way of saying that is, can Veronica ever be happy and actually continue to be effective as a character and as a detective?

That's a really good question. I like bittersweet endings. This one is pretty bitter but usually bittersweet is always my sweet spot for the show. I don't want it to be nothing but getting waylaid and undercut. I don't think that you'll ever get the big Hollywood, “everything turns out happy” and great ending, unless Kristen and I decide we're hanging it up, this is our last Veronica Mars go around. Maybe there won't be some gigantic hole in her heart that is left.

So we should not expect a great big happy wedding-themed finale?

No, no. I feel pretty certain about that. Famous last words! But no, I don't think so.