"That doesn’t make you a communist," the progressive tweeted to McConnell. "It just makes you a bad leader" 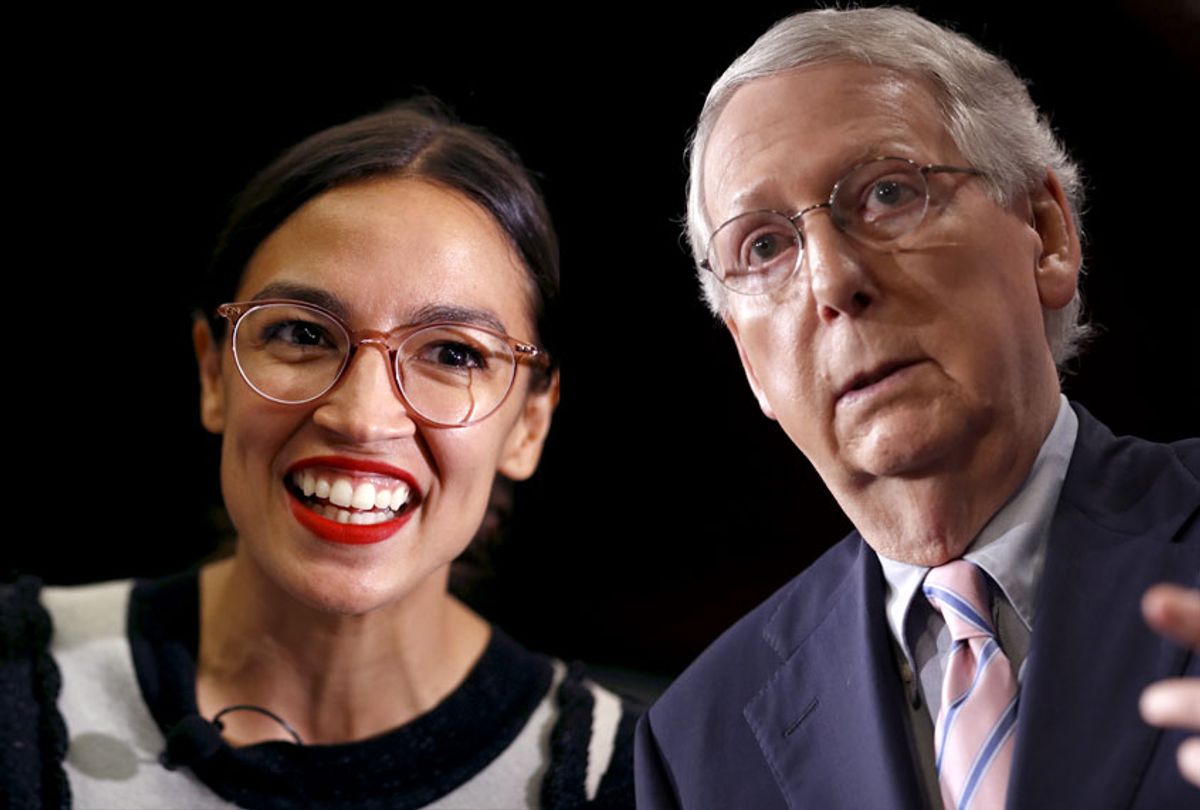 Rep. Alexandria Ocasio-Cortez, D-N.Y., corrected Senate Majority Leader Mitch McConnell on Tuesday for misusing the term "McCarthyism" when he applied it to critics of his decision to block election security legislation in the upper chamber.

"McCarthyism is the practice of baselessly accusing political opponents of being communists as unjust grounds for targeting & harassment," Ocasio-Cortez explained to McConnell on Twitter. "You are blocking action to protect US elections despite official DoJ pleas. That doesn’t make you a communist. It just makes you a bad leader."

Ocasio-Cortez responded to a tweet in which the Kentucky senator wrote, "Modern-day McCarthyism is poison for American democracy. It is shameful to imply that policy disagreements make the other side unpatriotic. The people who push such unhinged smears are doing Putin’s destabilizing work for him."

McConnell had summarized the defiant speech he gave Monday from the floor of the Senate. After barring votes on Democratic legislation written to bolster America's election security in the wake of Russian interference in the 2016 election, McConnell was dubbed #MoscowMitch — that is, of allowing America's election systems to remain vulnerable to Russian meddling.

He added, "For decades, I've used my Senate seat to stand up to Russia and protect the United States of America. I'm proud of my record. I'm proud that it's right there in black and white, and liars cannot gaslight it away. In the 1980s, as a freshman senator, I proudly stood with President Reagan on missile defense and other aspects of his Soviet policy. While the liberal media was shrieking — shrieking — that Reagan-Bush foreign policy wouldn't work, I was honored to support it with my vote and then watch communism crumble."

After claiming that he had opposed President Bill Clinton in the 1990s for supposedly being "too soft on Russia," he defended his decision to bar efforts by Senate Minority Leader Chuck Schumer and Sen. Richard Blumenthal, D-Conn., to pass the election security legislation in the Senate by unanimous consent.

"These theatrical requests happen all the time here on the Senate. I promise that nobody involved, including my friend the Democratic leader who made the request, actually thought he’d get a Republican Senate to instantly, unanimously pass a bill that got one Republican vote over in the House," McConnell said during his speech.

"It doesn’t make Republicans traitors or un-American," he continued. "It makes us policymakers with a different opinion."

Schumer disputed McConnell's characterization of the criticisms being made of him.

"If Leader McConnell doesn't like being criticized on election security, I challenge him: Let's debate it on the floor with amendments," Schumer said at the time. "I challenge him: Support additional appropriations for states to harden their election systems."

"In both cases, Leader McConnell has not done that. In fact, he has said he opposes more money to the states, even though they say — I believe it is 21 attorneys general have said they need more money," the top Democrat in the Senate continued. "Leader McConnell, despite our requests, has not only blocked unanimous consent requests but has not put any other legislation on the floor to deal with this."