"We need to call out white supremacy for what it is," Warren said in contrast to Trump's past "both sides" remarks 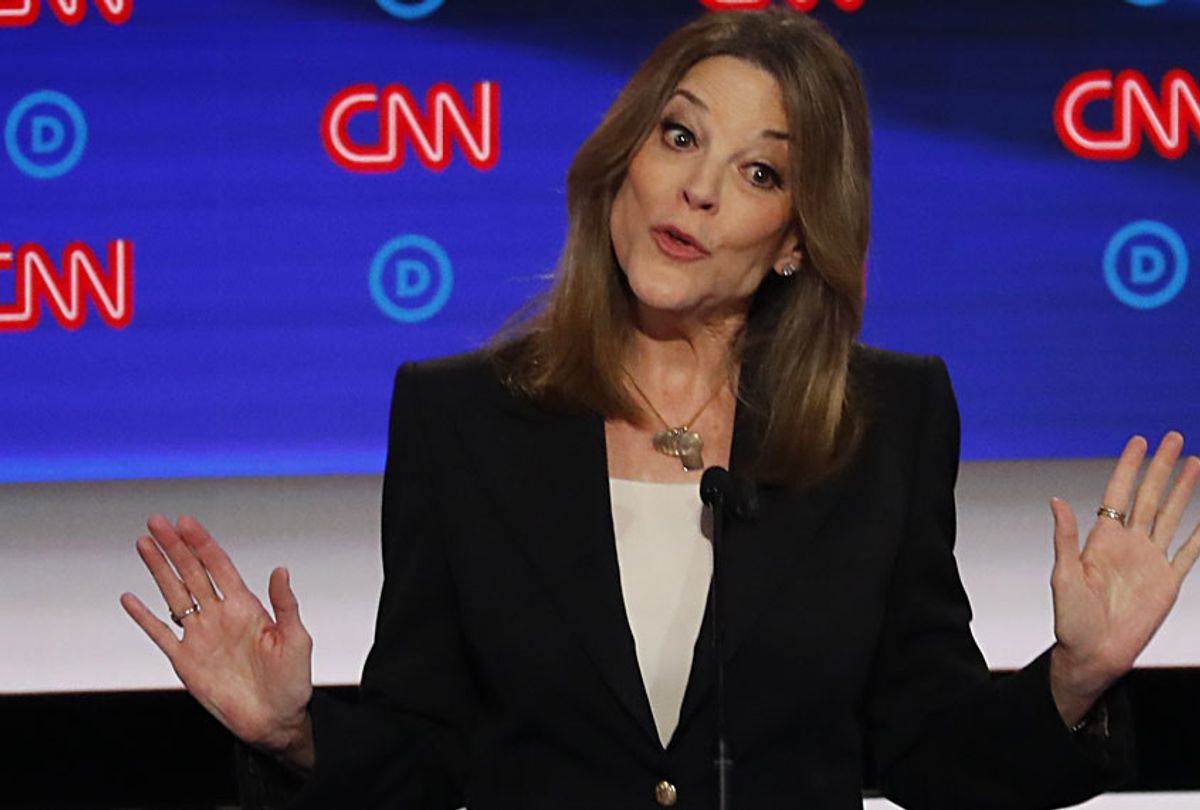 While President Donald Trump continued to double down on his racist attacks on Baltimore, Democrats vying for the nomination to unseat him in 2020 brought the issues of systemic racism and reparations for slavery reparations to the forefront of Tuesday's primary debates in another majority-black city: Detroit.

Among the leaders of the pack was Sen. Elizabeth Warren, D-Mass., who addressed the ongoing problem of racism in America by singling out white supremacy in the sharpest possible language.

"We need to call out white supremacy for what it is — domestic terrorism — and it poses a threat to the United States of America," Warren told the debate audience to thunderous applause. "We live in a country now where the president is advancing environmental racism, economic racism, criminal justice racism, health care racism. The way we do better is to fight back and show something better."

Trump, for his part, infamously failed to decry a deadly white supremacist attack in Charlottesville, instead casting "blame on both sides."

As Democrats took to the debate stage, an article published in the Washington Post revealed that the president had again attacked Baltimore, this time claiming in an interview that violent crime in the majority-black city is worse than it is in Honduras, a Latin American country grappling with deadly gang violence.

As the president continued to stoke racial tensions, the issue of healing those divides was spotlighted by the answers provided by his Democratic rivals. Self-help author Marianne Williamson shared her "deep truth-telling" on the issue of reparations for slavery.

"We need some deep truth-telling when it comes — we don't need another commission to look at evidence. I appreciate what Congressman O'Rourke has said," she added. "It is time for us to simply realize that this country will not heal. All that a country is a collection of people. People heal when there is some deep truth-telling."

"We need to recognize that when it comes to the economic gap between blacks and whites in America, it does come from a great injustice that has never been dealt with," Williamson continued. "That great injustice has had to do with the fact that there was 250 years of slavery, followed by another 100 years of domestic terrorism."

Williamson then argued that if the 40 acres and a mule that had been promised to freed slaves was adjusted into modern day money, it would amount to roughly the sum she set forth.

The author was reacting to an earlier response given by former Rep. Beto O'Rourke, D-Texas, to a question about racism in America.

"The way we became the greatest country on the face of the planet is literally on the backs of those who were kidnapped and brought here by force," the Democrat from Texas said. "The legacy of slavery, and segregation, and Jim Crow and suppression is alive and well in every aspect of the economy and in the country today."

If elected, O'Rourke vowed to sign into law a new Voting Rights Act, as well as the reparations bill authored by Rep. Sheila Jackson-Lee, D-Texas. He additionally cited disparates in education and health care as top priorities.

Mayor Pete Buttigieg of South Bend, Indiana, also addressed a question about how he could win over black voters amid criticisms over his handling of racial issues in his home town, which include the diversity of the police force and housing policies.

"Right now, in the wake of a police-involved shooting, our community is moving from hurting to healing by making sure that the community can participate in things like revising the use of force policy and making sure there are community voices on the board of safety that handles police matters," Buttigieg said.

The openly-gay candidate then discussed the impacts of systemic racism on all areas of life across the country.

"Systemic racism has touched every part of American life, from housing, to health to home ownership," Buttigieg said. "If you walk into an emergency room and you are black, your reports of pain will be taken less seriously. If you a poly for a job and you are black, you are less likely to be called just because of the name on the resume."

"It's why I've proposed that we do everything from investing in historically red-lined neighborhoods to build black wealth in home ownership, to supporting entrepreneurship for black Americans," the candidate added.