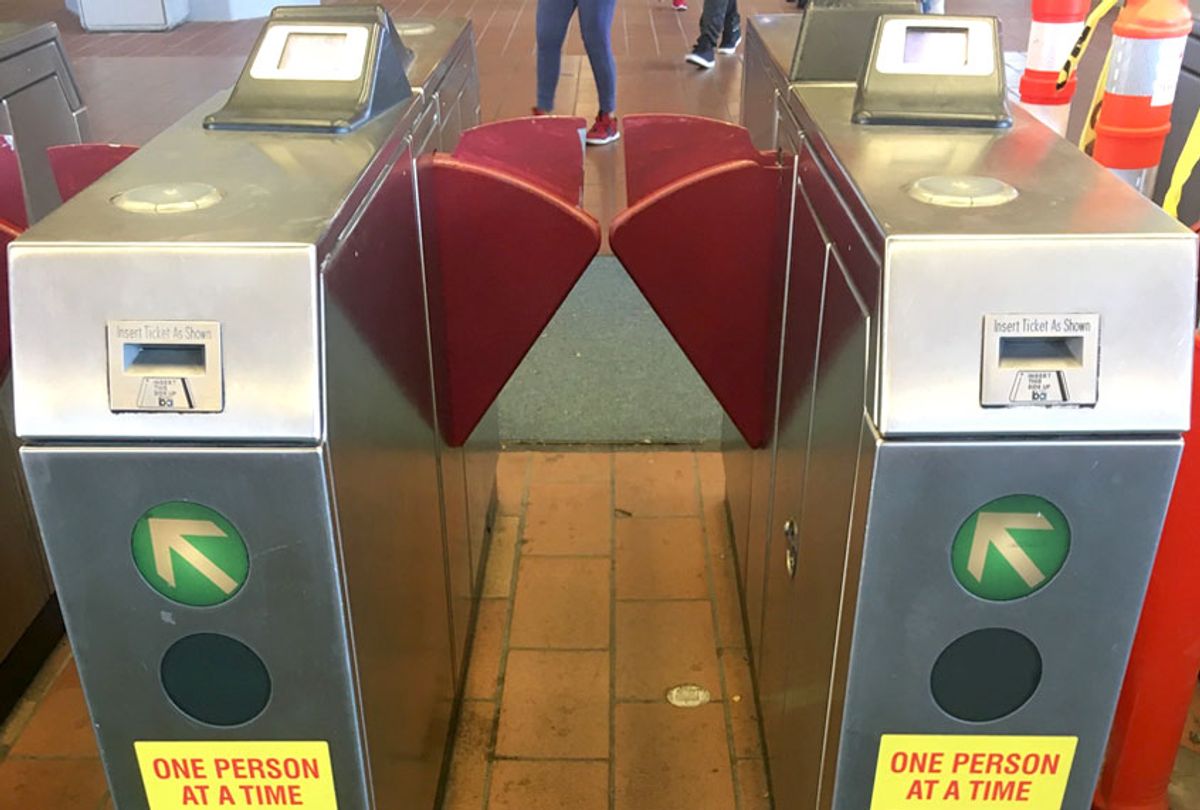 Over the last couple weeks, Bay Area Rapid Transit (BART), the transit public transportation system for the San Francisco Bay Area, has been under fire for its piloted project to prevent fare evaders. The idea to keep people from jumping over the turnstiles has physically manifested as guillotine-like pop-up modifications installed on the fare gates that are being tested at stations in low-income neighborhoods. It is the newest iteration of hostile architecture that afflicts society’s most vulnerable populations.

The alterations have been retrofitted on existing gates at two BART stations. One, the Richmond station, where double-decker blade modifications have been made. The second at Fruitvale station, where the blades shoot up invertedly to the ground. The cost for both pilot programs is approximately $200,000. At the Fruitvale BART station the prototype looks like a switchblade mounted atop an automatic entry gate. It is intimidating to the point of hostility; more Gilead than Oakland, California. In a failed effort to make the enforcement retrofit less confrontational, the city painted the chrome red.

Since being installed, riders and activists have taken to Twitter to voice their concerns.

Corbett O’Toole, an advocate in the disability community, posted about the alteration on Facebook saying it is clearly dangerous for people in wheelchairs.

“It's really clear that these are dangerous to people who's [sic] heads between 30-48" off the ground. That's a lot of folks,” O’Toole said in her viral Facebook post. “These gates snap shut quickly and with a great deal of force. Bad on legs and arms, absolutely dangerous on heads and necks.”

Kurt Kohlstedt, digital director and producer for the architecture and design podcast 99% Invisible, told KQED he has never seen “anything that even comes close to the overt hostility of these inverted guillotine prototypes.”

Fare evasion costs BART between$15 and $25 million annually. The agency first launched a fare inspection program in 2018 to combat the issue, which issued riders without proof of payment a citation of $75, or $55 if the rider is under 18. A misdemeanor charge is issued riders who rack up three citations in one year. The average BART ride costs $3.90 one way.

The pilot program has posed challenges to San Francisco’s homeless population rather than assisting it in a region with an above-average cost of living.

“We know anytime fees and fines are given, they disproportionately impact low income and poor people who are often unable to pay those fines and fees and who face implicit bias in the issuing of those citations at disproportionate rates,” Jennifer Friedenbach, the executive director of the Coalition on Homelessness, told Salon in an email. “We did work with BART to mitigate some of these issues, but ideally public transportation should be free for low-income people."

The attention the programs have received was a talking point at last week’s BART Board meeting. Despite the perception that the new gates are dangerous (they have been called “skull-crushers” on Twitter), BART’s board of directors insisted that there have been no reports of injuries and feedback has been “very positive.”

“If anything, our fare gates define the way BART welcomes riders into our system, whether they're first-time riders or long-time BART commuters,” she told Salon.

At the meeting, the newly appointed BART General Manager Bob Powers said there was nothing “malicious” about the selection of the stations when trialing the counter-measures. Many people are wondering why focus on curbing fare evasion at all though? Is it really a problem worth spending hundreds of thousands of dollars to solve? Clearly the governing authority is reconsidering both these questions.“I'm in agreement with GM Powers that we need the data first before making any final decisions, and that is expected to happen in September,” Li said. “I can absolutely see an outcome where we don't expand this pilot program, but I know the conversation and decisions around more accessible and more secure fare gates doesn't end here.”