I grew up in one of Reagan's so-called Drug Free Zones, where bricks of cocaine featuring his face were sold 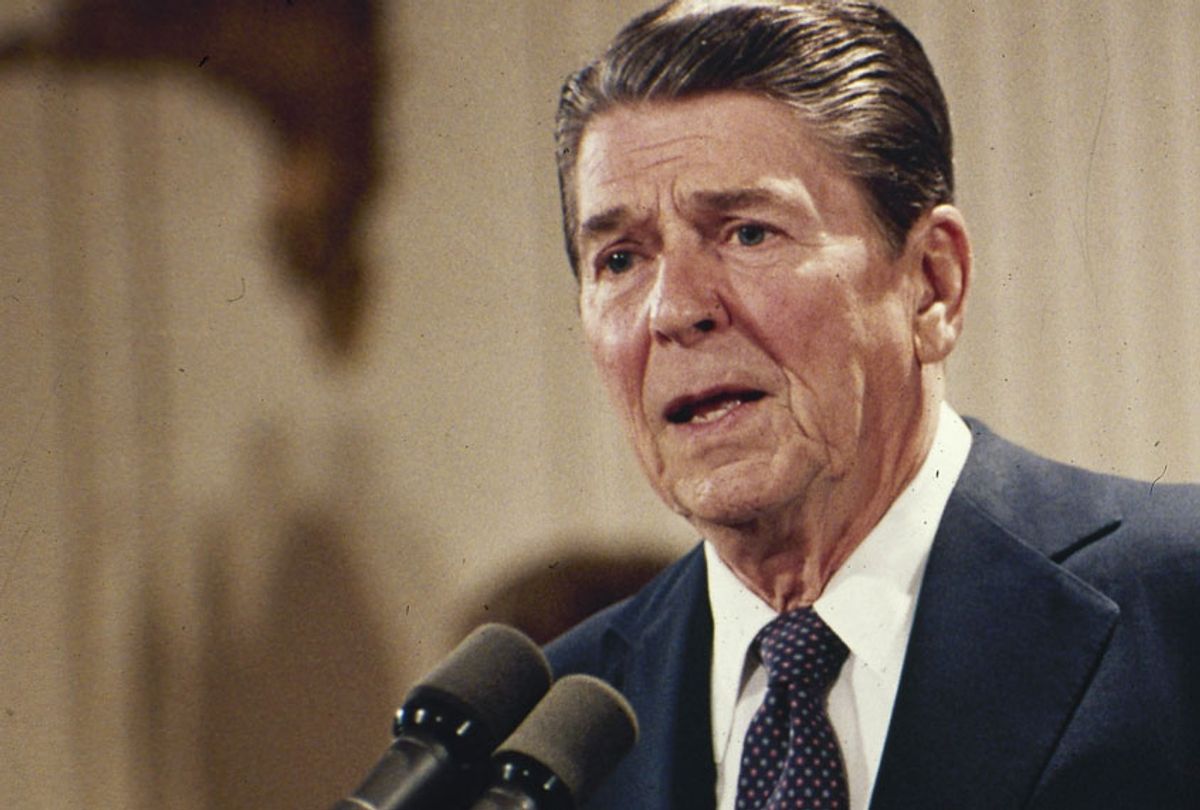 Ronald Reagan has always been known as a crook and a racist in my community.

Earlier this week, The Atlantic reported that a newly-released recording from Richard Nixon's presidency featured Ronald Reagan, then the next Republican to be elected commander-in-chief, referrring to people from Africa as "monkeys."

"Last night, I tell you, to watch that thing on television as I did," Reagan, then the governor of California, can be heard saying to Nixon during a phone call following China's recognition by the U.N, “To see those — those monkeys from those African countries — damn them, they’re still uncomfortable wearing shoes.”

Ronald Reagan was the first president I could remember, and though I was still in elementary school when he left office, his name lingered in my neighborhood for two reasons. The first came from my dad and uncles calling him “a racist clown who doesn’t deserve to be president” and the other came from the older street guys who praised the Reagan Administration for flooding the inner cities with cocaine. There’s never been a hiring boom from inner city black Baltimore. Selling cocaine, which eventually turned into the creation of the crack era, both fed and destroyed a countless amount of black families. How could a sitting U.S. president contribute to this wholesale destruction of communities? Sounds like a conspiracy, right?

We know Reagan doubled down on Nixon’s War on Drugs campaign in a 1982. In 1986, he signed a drug enforcement bill that budgeted $1.7 billion to fund his version of the War on Drugs, which eighty-sixed the public health approach and featured a mandatory minimum penalty for drug offenses. First Lady Nancy Reagan coined the phrase “Just say No,” which was plastered on posters all over my elementary school, that was located in a “Drug Free Zone.”

Drug Free Zones were places that were supposed to be drug-free at all times. “Hey kids, if you ever see a blue and white sign that says Drug Free Zone,” a cop who visited our school told us, “then run away quickly, because those signs are deterrents and they mean you are in the middle of an area with tons of drugs!” But we all laughed, because we lived in Drug Free Zones as well. Our teacher looked at the officer and shrugged. Our neighborhood was obviously flooded with illegal narcotics. And while it appeared that we had a president dedicated to eviscerating the drug problem, his priorities were actually elsewhere.

Reagan's administration supported the Contras, a guerrilla military force who planned to overthrow the socialist Sandinista government of Nicaragua. Congress didn’t vote to fund this mission­­, but it remained important to the president, so he was charged with the task of finding money elsewhere.  Several investigative reports found that the Contras had been smuggling cocaine into the United States in an effort to fund their war and even alleged CIA knowledge and involvement, with multiple federal investigations launched into the CIA's possible entanglement after.

While representing the Reagan Administration in September 1986, North met with Panama dictator Manuel Noriega in London — after the New York Times published an article saying Noriega was responsible for the most “significant drug-running in Panama.” Why would a Reagan affiliate looking to raise money meet with a world renowned drug dealer?

Nothing came of the Noriega meeting, but eventually,  North was one of three National Security Staff members to be prosecuted, along with Robert McFarlane  and John Poindexter, in the Iran-Contra affair, in which the U.S. sold weapons to Iran through back channels in order to fund the war in Nicaragua. North was indicted on 12 counts, convicted of three, and sentenced to a three-year prison term, two years' probation, $150,000 in fines, and 1,200 hours of community service. But in 1990, his case was overturned and his convictions vacated, with all charges dismissed in 1991.

Reagan was never charged with any involvement in the affair, but North and the murky legacy he left behind helped create the Reagan drug conspiracy stories that the street guys in my neighborhood loved. Back when I was ten, I saw a brick of cocaine with Reagan's face embossed on the front.

Beyond the stories about Reagan's administration flooding cities with cocaine, Reagan's racism was evident to people like my dad and uncles decades before these Nixon phone calls surfaced. In a 1976 campaign speech during Reagan’s first run for president, he told the story of The Welfare Queen, a woman in Chicago who he said used over 80 names, 30 addresses, and 15 phone numbers to steal $150,000 in benefits from the government. His story was true, but not typical. Linda Taylor did exist — she defrauded the government and was a master  criminal who served herself. She didn’t represent the African American community at large. Reagan never mentioned her name or color during speeches; however, he preached that she sported furs around Chicago and drove a Cadillac to his mob of angry white supporters.

At the time, 60% of welfare recipients were non-black, but Reagan masterfully created a narrative that his so-called hard-working white base was funding lazy African Americans all over the country. It worked like a charm. Those whites only had a cocktail of Reagan, their scant personal experience with black people — if they had any at all — and the media for a guide. Add that to a need for the justification of their own struggles and Reagan's lies was eaten up like a bloody steak in a den full of starving lions.

So, when we see racist politicians like Donald Trump praising Reagan now, and even stealing his Make American Great Again slogan, we know exactly who we are dealing with. But I don't feel much comfort in their racism being confirmed. I've felt it my whole life.