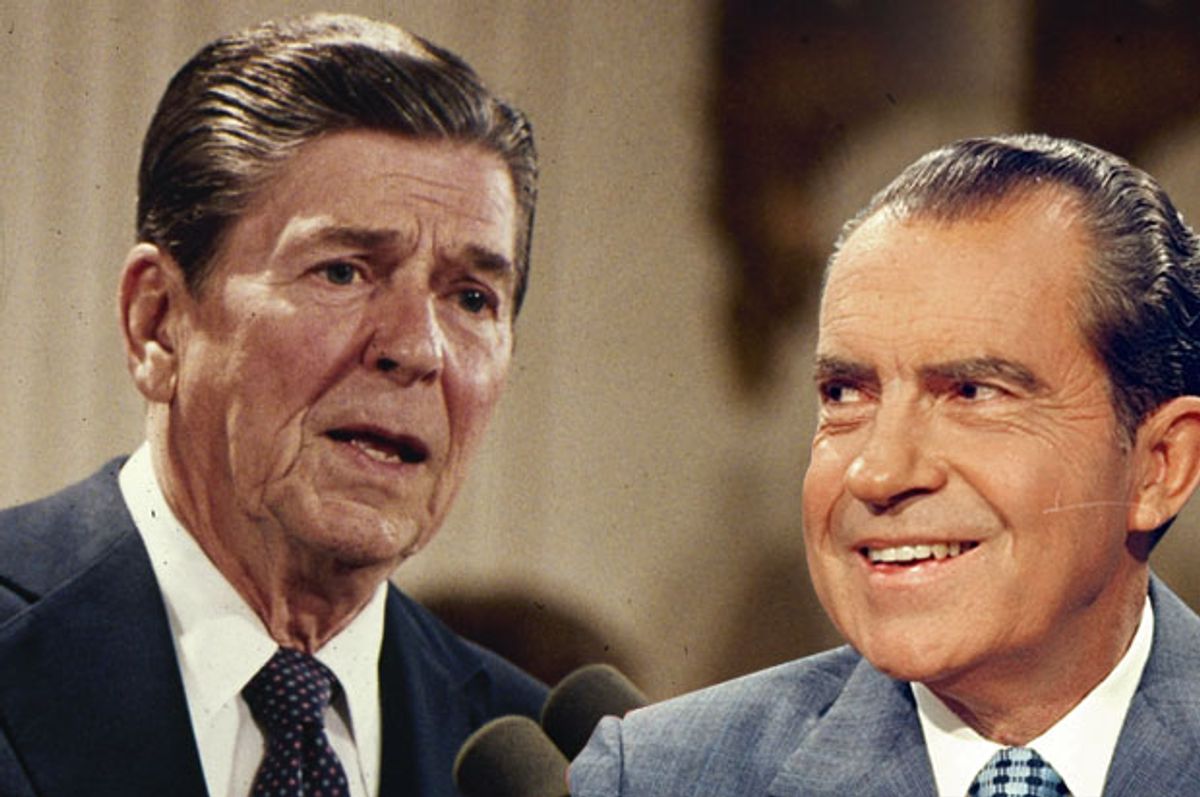 A newly-released recording from Richard Nixon's presidency reveals that Ronald Reagan, the next Republican to be elected commander-in-chief, once referred to people from Africa as "monkeys."

"Last night, I tell you, to watch that thing on television as I did," Reagan, then the governor of California, can be heard saying to Nixon during a phone call following China's recognition by the U.N.

After Nixon interrupted to affirm what Reagan had said, the governor pressed on.

"To see those — those monkeys from those African countries — damn them, they’re still uncomfortable wearing shoes," Reagan said.

"Had the story stopped there, it would have been bad enough. Racist venting is still racist. But what happened next showed the dynamic power of racism when it finds enablers," Tim Naftali wrote about the recording in the Atlantic. "Nixon used Reagan’s call as an excuse to adapt his language to make the same point to others. Right after hanging up with Reagan, Nixon sought out Secretary of State William Rogers.

When Nixon found Rogers, he mentioned Reagan's comments as a way of arguing that American foreign policy should account for racist views.

"As he said, he saw these— these, uh — these cannibals on television last night. And he says, ‘Christ, they weren’t even wearing shoes, and here the United States is going to submit its fate to that,’ and so forth and so on," Nixon told Rogers.

"Reagan called me last night, and I didn’t talk to him until this morning. But he is, of course, outraged. And I found out what outraged him, and I find this is typical of a lot of people: They saw it on television," Nixon said of Reagan. "And, he said, ‘These cannibals jumping up and down and all that.’ And apparently it was a pretty grotesque picture. Apparently, it was a terrible scene, and they cheered."

It was well known prior to the release of this tape, which was recorded in October 1971, that both Nixon and Reagan held racist views. Nixon infamously employed a so-called "Southern strategy" during the 1968 and 1972 elections in an effort to peel off racist voters who had previously aligned with Democrats and independent segregationist candidate George Wallace. As president, Nixon also worked to thwart civil rights programs, such as school busing. He was caught making racist comments not only about African-Americans but also about Asians, Italians and particularly Jews, even though he hired a number of Jewish advisers.

Reagan, who was an outspoken opponent of the major civil rights legislation of the 1960s, once argued that exploited Mexican-American farm workers deserved to be mistreated, because they are "built close to the ground." He also vetoed the Comprehensive Anti-Apartheid Act and was notorious for opposing women's rights legislation and for turning a blind eye to the AIDS epidemic due to his hostility toward members of the LGBTQ community.

The release of the tape comes after two weeks of racist statements made by the current Republican in the White House: President Donald Trump. The commander-in-chief recently told four congresswomen of color to "go back" to countries "from which they came." (Of the members of the so-called "squad," only one legislator, Rep. Ilhan Omar, D-Minn., was actually born outside of the U.S. She is an American citizen.) Trump has also continued to double down on racist attacks against the majority-black city of Baltimore and the civil-rights icon who represents it in Congress: Rep. Elijah Cummings, D-Md.