Tomi Lahren, who lectures against "mean girls," suggests Kamala Harris slept her "way to the top" 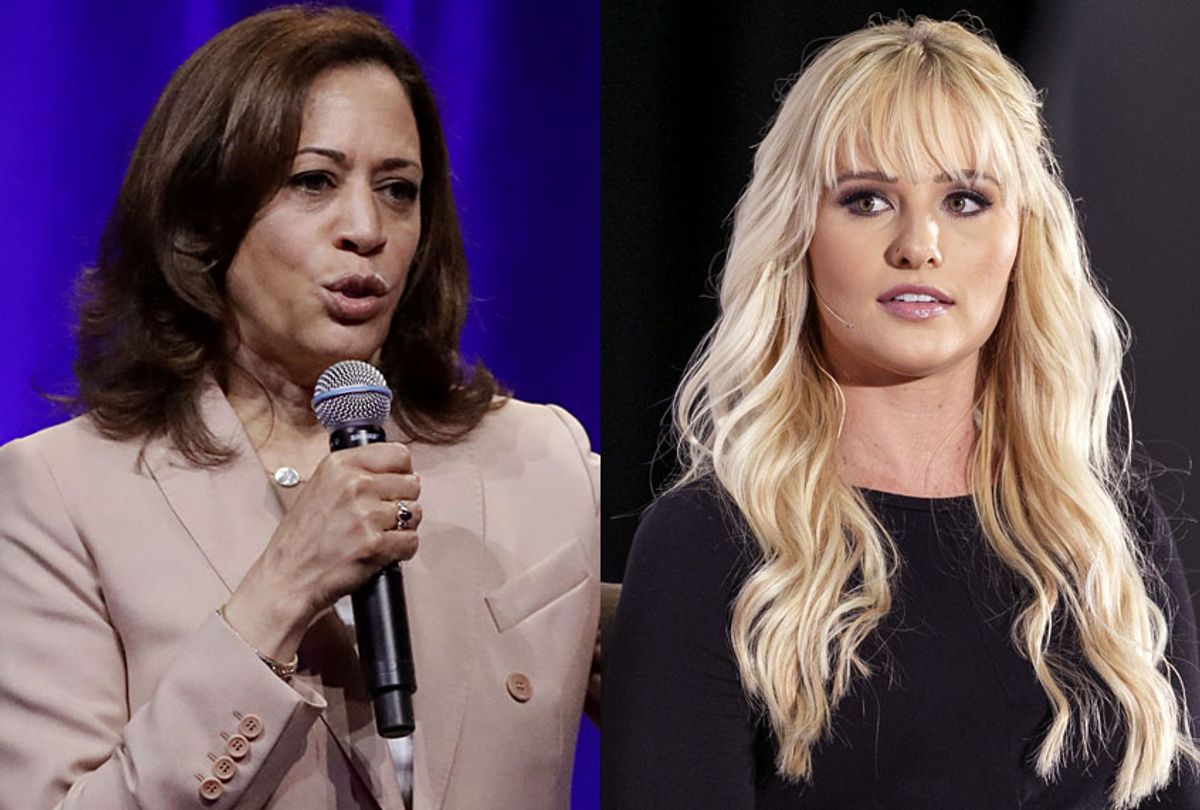 As Fox News personality Tomi Lahren live-tweeted the second half of CNN's Democratic primary debate on Wednesday night, she insinuated that California Sen. Kamala Harris had used sex to advance her career in a tweet that was met with criticism from her own Fox colleagues.

“Kamala did you fight for ideals or did you sleep your way to the top with Willie Brown?”  Lahren tweeted.

Willie Brown, the former mayor of San Francisco, and Harris dated briefly in the mid-1990s, after Brown had separated from his wife in 1981. The pair split up in 1995, and Harris went on to marry California-based lawyer Douglas Emhoff in 2014. The two politicians remained friends.

Brown and Harris’ past relationship is not a secret. It came up when she ran for San Francisco district attorney in 2003; when Harris announced her intention to run for president, Brown wrote a 137-word op-ed in the San Francisco Chronicle titled, “Sure, I dated Kamala Harris. So what?”

This isn’t the first time Lahren has made comments about their relationship. As Matt Gertz of Media Matters for America pointed out, Lahren dedicated an entire episode of her show, "Final Thoughts," to the topic, in which she accused Harris of “using an extramarital affair to boost her political career” and “dating [her] way to the top.”

According to Gertz, “The episode featured the chyron ‘Kamala’s Affair Boost.’”

In response to latest Lahren’s tweet, Fox commentator Kat Timpf tweeted, “I am curious to know what you think bringing a woman’s personal/sexual life into this accomplishes. Men do that to us enough as it is. I’m honestly asking.”

“Do you have any idea how damaging this is to women who’ve actually been sexually harassed, assaulted or demeaned in the workplace?” tweeted Fox Nation host Britt McHenry in response to Lahren. “How much this weakens our own gender, regardless of partisanship. My goodness.”

In June, McHenry filed a sexual harassment complaint against her Fox Nation co-host, former pro-wrestler Tyrus, after he allegedly sent her unsolicited text messaged with sexual comments on multiple occasions. Tyrus was ultimately reassigned from the show he shared with McHenry, “Un-PC,” to a new show called "NUFFSAID."

Fox has attempted to move past a climate of sexism, harassment and sexual misconduct that came to light in 2016 after its late founder and CEO, Roger Ailes, was ousted over decades worth of alleged sexual misconduct.

Lahren's rude personal jab at Harris is also at odds with the tone of her own book, “Never Play Dead: How The Truth Makes You Unstoppable,” which was released in June.

“Tomi Lahren's new book calls for an improvement in the tone of our political debate, one in which our conversations revolve around the merits of ideas rather than distortions and personal attacks,” Salon’s Matt Rozsa wrote in the preface of an interview with Lahren. “It is a welcome argument — one that she will hopefully apply to herself as well as her opponents.”

In one key passage, Lahren said she didn’t care about people’s backgrounds, but admonished others against becoming “a mean girl.”

“You may be in that position of power where you feel like you are controlling the room or you own the moment — whether that's at school, work, among your friends — but if you're a crappy person, it's worth nothing,” she wrote. “Even when it's easy to be a mean girl, even when other people cheer you on for being one, don't do it. You won't be happy with yourself.”

On Thursday morning, Lahren issued an apology via Twitter: “I apologize for my comment on Kamala’s personal relationship. It was the wrong choice of words. There are many other things to take her to task for and I will stick to those.” It’s unclear if it was motivated by the substantial pushback from her own colleagues, or if she had taken her own words about being a “mean girl” to heart.