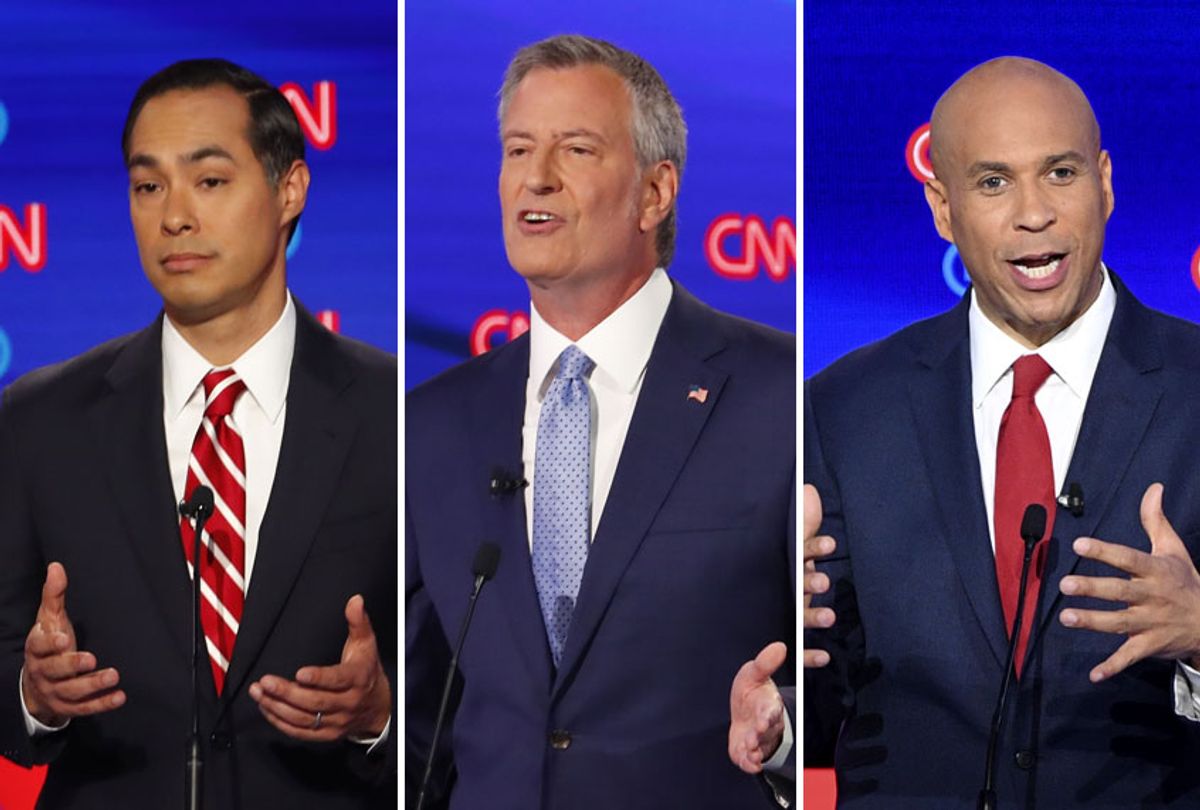 There was an interesting moment of confusion early on in the second night of the Democratic presidential debates this week. Minutes into the CNN debate on Wednesday, as New York Mayor Bill de Blasio offered his opening statement, a small smattering of hecklers could be heard in the Detroit hall. Their chants grew louder during New Jersey Sen. Cory Booker’s opening remarks.

That reference may have been obscure to many Americans, but not to the candidates on that stage, or to activists concerned with police abuse. The chant to New York police officer Daniel Pantaleo, who was filmed wrapping his arm around the neck of a man named Eric Garner during a Staten Island arrest in 2014. The 43-year-old Garner could be heard muttering “I can’t breathe!” before he died.

Garner was suspected of selling cigarettes without a license — a minor misdemeanor, encountered in many neighborhoods of many cities. A medical examiner later ruled his death to be a homicide. It was is and remains against NYPD protocol to place a suspect in a chokehold. But a grand jury decided not to indict Pantaleo — some police officers and Pantaleo's representatives have asserted he wasn't literally using a chokehold — and President Trump’s Justice Department recently declined to bring criminal charges against him.

Now de Blasio, a liberal Democrat who won the mayoralty on a platform rooted in racial justice (his wife and children are black), faces pressure from Garner’s family, activists and other elected officials to remove Pantaleo from the police force five years later. De Blasio has said the officer is entitled to due process, which he has certainly received, but the mayor has never clearly indicated if he believes Pantaleo should be fired.

“We could not sit silent while @NYCMayor Bill DeBlasio misrepresented his positions on Stop and Frisk and continues to employ the police officers who killed #EricGarner, in particular Daniel Pantaleo,” tweeted Tamika Mallory, one of the five Black Lives Matter protesters at the debate.

Mallory explained that the Black Lives Matter protests were heard more loudly during Booker’s remarks than de Blasio’s because of a delayed response from law enforcement inside the debate hall. Booker paused as the protesters continued to chant while being escorted out.

Hours before the debate, several members of the NYPD gathered with Republican legislators and New York officials, demanding that CNN to press de Blasio on an entirely different police matter — a recent spate of water-dousing incidents targeting officers. At a rally on the steps of City Hall in Manhattan on Wednesday morning, Republican lawmakers flanked by police officers proposed a new state law that would make tossing water on an officer a felony. (To be clear, no officer has been injured in any of these events, and no liquid has been thrown besides water.) Trump has also embraced the viral video of water-dousing to attack de Blasio.

Another group of officers traveled to Detroit to confront de Blasio for what they called the “Pantaleo Effect,” whereby the mayor's criticism of the officer’s deadly 2014 chokehold has allegedly led to a “dangerous precedent."

“The truth of the matter is, de Blasio was putting us as common citizens in harm's way because of his policies,” one officer complained in front of the Detroit debate hall, calling on CNN to challenge de Blasio on the water dousing incidents.

Instead, because of the Black Lives Matters protesters, de Blasio faced with a stage full of rivals who called him out for his failure to hold Eric Garner’s killer accountable.

"Officer Pantaleo used a chokehold that was prohibited by NYPD. He did that for seven seconds. Eleven different times Eric Garner said he couldn't breathe,” former HUD secretary Julián Castro said during his first opportunity to speak after the protests. “He knew what he was doing, that he was killing Eric Garner, and yet he has not been brought to justice. That police officer should be off the street."

Sen. Kirsten Gillibrand of New York, a neighbor of de Blasio's but not much of a friend, piled on. She said Pantaleo "should be fired now" and that if she were mayor she would dismiss him. If she were president, Gillibrand added, she would order a "full investigation" into Garner's death with a publicly released report.

The Black Lives Matters protesters, and the reception they received from the other Democratic candidates, forced CNN’s Jake Tapper to directly ask de Blasio why Pantaleo is still on the police force. De Blasio said the Garner family was “going to get justice” but did not elaborate.

“I have confidence in that, in the next 30 days in New York,” he added. “For the first time, we are not waiting on the federal Justice Department, which told the city of New York that we could not proceed because the Justice Department was pursuing their prosecution, and years went by and a lot of pain accrued. And in the meantime, what I’m working on is making sure — and I have for five years — there will never be another tragedy. There will never be another Eric Garner because we’re changing fundamentally how we police.”

In a tweet, de Blasio later thanked the protesters.

“To the protestors in the audience today: I heard you. I saw you. I thank you,” he wrote. “This is what democracy looks like and no one said it was pretty.”

“Don’t sit there and say you want to create a more equitable society for everyone while back at home you are allowing police officers to kill without any recourse or accountability,” said Foy after being removed from the debate. “Eric Garner was choked to death after having screamed out ‘I can’t breathe’ 11 times and this man was the mayor when it happened and he’s the mayor today and he’s allowed Daniel Pantaleo to continue to enrich himself.”

New York City Public Advocate Jumaane Williams told the New York Times that de Blasio now needs to "do something or don't mention Eric Garner's name ever again. ... You cannot be president, you cannot be the Democratic nominee if Daniel Pantaleo is still on the force."

So these BLM activists have done what many of the Democratic candidates in Detroit failed to do: Draw clear attention to an urgent unresolved issue. Eric Garner was killed by a New York cop (intentionally or otherwise) because he was selling cigarettes in an effort to feed and house his family. Garner received none of the due process that de Blasio insists Pantaleo is owed, only immediate conviction followed by the death penalty.

Along with protesters from the Cosecha Movement, who chanted "3 million deportations" and unfurled a banner that read "Stop all deportations on day one" while former Vice President Joe Biden defended the Obama administration's immigration record, these civil rights activists are doing the hard work of holding candidates accountable. So far the mainstream media has failed to do that.