New York Sen. Kirsten Gillibrand was less equivocal on the subject than either of her male counterparts on stage 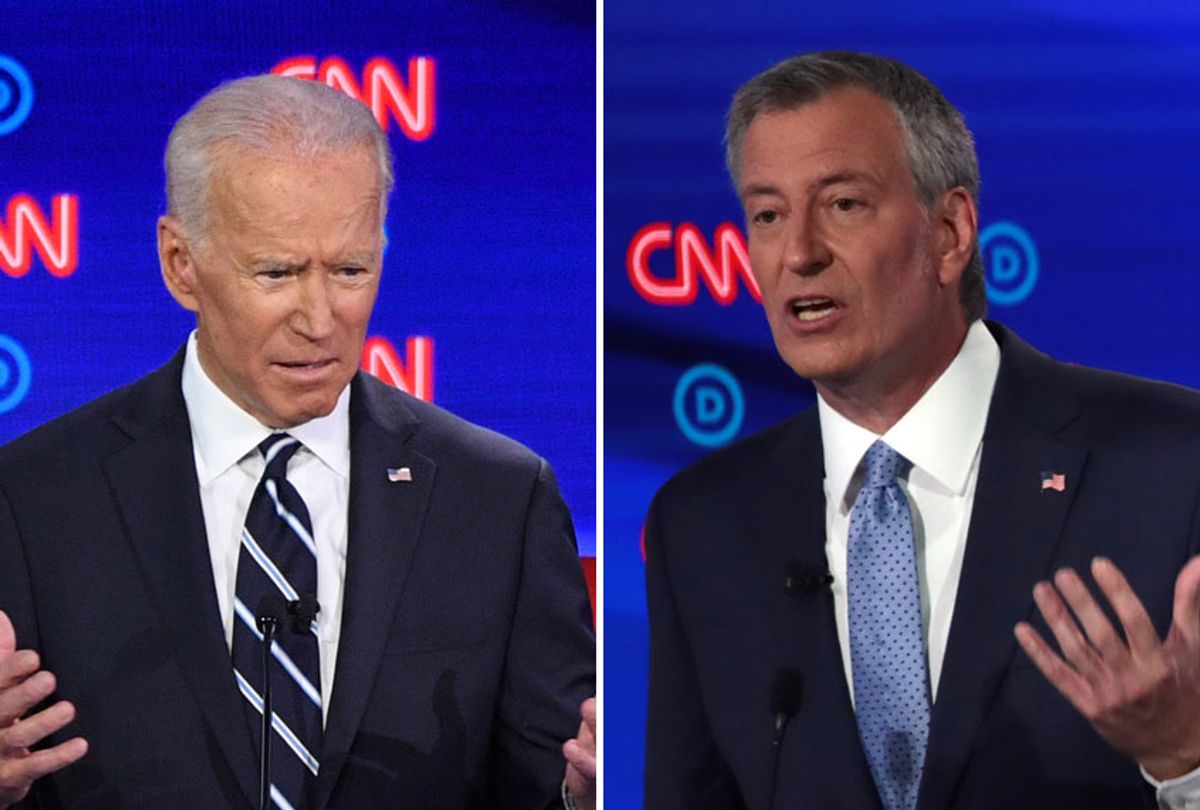 After moderator Jake Tapper of CNN asked de Blasio why Daniel Pantaleo, the NYPD officer who put the unarmed black man in a fatal chokehold, remains on the force, the New York  mayor promised that Garner's family was "going to get justice" within "the next 30 days."

"For the first time, we are not waiting on the federal Justice Department, which told the city of New York that we could not proceed because the Justice Department was pursuing their prosecution," de Blasio said.

The mayor then turned to the former Vice President and asked, "What did you do to try and spur on the Justice Department to act in the Garner case?"

Garner's death was caught on tape, and the video of the fatal encounter appears to show Pantaleo holding him in a chokehold for 15 seconds. Garner's last words — "I can't breathe" — became a rallying cry for protests across America against the use of excessive force by police.

De Blasio's role in Garner's case is complicated. Although he has not directly called for Pantaleo to be fired, he also does not have the legal authority to fire an officer, according to the New York Times. However, de Blasio did wait until the completion of a federal investigation before commencing with municipal disciplinary hearings, as well as argued that Pantaleo deserved due process in spite of the video evidence in the case.

Biden did not answer de Blasio's question, instead describing how the federal inmate population was reduced under former President Barack Obama, and body cameras were provided to certain police officers.

"The fact is that we're talking about things that occurred a long, long time ago," Biden said. "And now, all of a sudden — you know, I find it fascinating. Everybody is talking about how terrible I am on these issues. Barack Obama knew exactly who I was — he had 10 lawyers do a background check on everything about me on civil rights and civil liberties, and he chose me. And he said it was the best decision he made. I'll take his judgment."

Not everyone at the debate thought de Blasio was blameless. At one point, protesters supporting Garner's family began to chant "Fire Pantaleo" as the mayor spoke. They were escorted out of the auditorium.

And Sen. Kirsten Gillibrand, who represents New York, was less equivocal on the subject than either of her male counterparts on stage.

Garner was not the only topic Biden and de Blasio squared off over during the debate. After Biden dodged a question from de Blasio about whether the former vice president had attempted to curtail Obama's deportation policy, the New York City mayor asked, "Vice President Biden, I didn't hear your response when the issue came up of all those deportations. You were vice president of the United States. I didn't hear whether you tried to stop them or not, using your power — your influence — in the White House. Do you think it was a good idea? Or do you think it was something that needed to be stopped?"