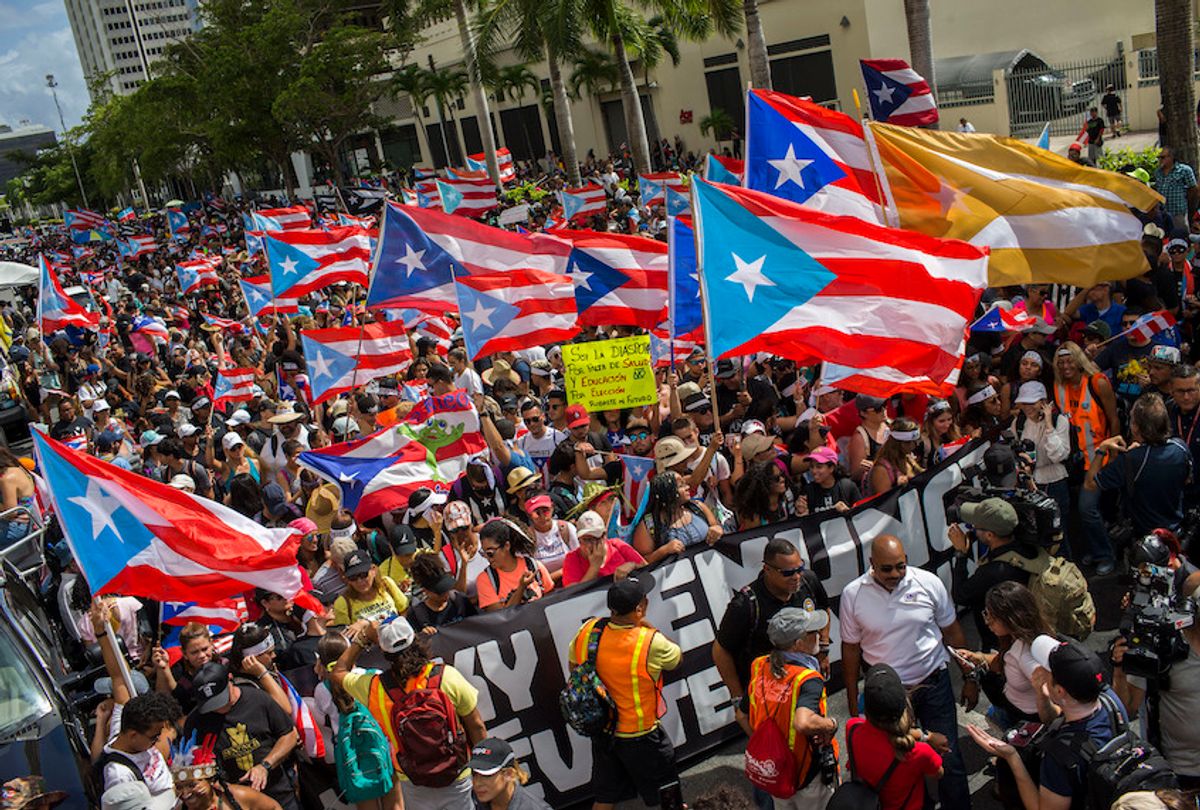 As Americans lament the current sorry state of democracy in Washington, D.C., government by the will of the people was very much alive recently in Puerto Rico, where a prolonged general strike that virtually shut down the island forced Governor Ricardo Rosselló to announce his resignation.

During the strike, huge crowds mobbed the governor’s mansion around the clock, closed highways in the capital of San Juan, and persuaded some presidential candidates in the Democratic Party to join in calling for the governor to resign.

Protesters had multiple grievances, but a “final straw” seems to have been a series of text messages leaked to an independent news organization in which the governor and his closest associates insulted political opponents and allies, members of the news media, and the LGBTQ community. Another notable target for insults in the text exchanges were the island’s public school teachers, whom the governor’s chief financial officer at the time, Christian Sobrino, called, “terrorists.” (Sobrino and other top officials participating in the chats have resigned since the messages went public.)

Puerto Rico’s school teachers have been a constant nemesis to the Rosselló regime, and the island’s largest teachers’ union, the Asociación de Maestros de Puerto Rico (AMPR), united with other labor unions on the island to organize the general strike. Randi Weingarten, the leader of the American Federation of Teachers, which AMPR is an affiliate of, joined in the calls for Rosselló’s resignation.

The teachers’ disagreements with Governor Rosselló started long before the release of the insulting texts.

“People in Puerto Rico felt betrayed by the governor,” says Myrna Ortiz-Castillo in a phone conversation. Ortiz-Castillo is a third-grade teacher and serves as finance secretary at the AMPR local in Bayamon. She insists, “He is supposed to be the person who takes care of the people. Instead he took care of his friends.”

One of the “friends” Ortiz-Castillo is referring to is the charter school industry. During his tenure, Rosselló pushed through the first law allowing charter schools on the island, and after the bill passed, he continued to press for opening more charters. Now it seems his ousting, and the legacy of corruption he leaves behind, will likely damage prospects for the charter industry in Puerto Rico for some time.

Much of the teachers’ disillusion with Rosselló goes back at least to December 2016 when then Governor-elect Rosselló appointed Julia Keleher to be the Puerto Rico secretary of education.

Keleher, a native of Philadelphia who barely speaks Spanish, was effectively already on the government payroll, as her firm Keleher & Associates had been awarded almost $1 million in contracts to consult on the island’s education system. Her outsized salary — $250,000 to oversee a system where the average teacher pay is only $27,000 — also created controversy.

Shortly after taking office, Keleher pushed for a plan to close nearly 200 public schools across the island, which would have led to thousands of teachers losing their jobs. She also pledged to decentralize the school system and delegate school services, terms often used to introduce the idea of charter schools and other forms of public-private education partnerships.

Keleher’s proposals drew immediate pushback from multiple political factions on the island, but barely nine months into her tenure, she got the perfect opportunity to turn her proposals into policies when Hurricane Maria slammed the island. The storm inflicted $142 million in damages to schools, and 40 days after the storm, only 109 of Puerto Rico’s 1,100 schools had reopened.

Keleher repeatedly referred to the catastrophe as an “opportunity.”

While Keleher worked the policy channels to introduce charter schools to the island, teachers were in communities delivering aid and comfort.

Ortiz-Castillo recalls being a first-line responder to the widespread destruction. In her phone call to me, she describes traveling to devastated communities as part of the union’s outreach effort to use its extensive membership network to identify where parents and their children were struggling and advise where to direct supplies, food, and drinking water. Many schools became, essentially, relief centers.

Keleher seemed to have other priorities.

As Education Week’s correspondent on the ground in Puerto Rico reported, she was “diving deep into the lessons of loss and opportunity in previous natural disasters, including Hurricane Katrina, which struck New Orleans in 2005.”

In a tweet, Keleher said New Orleans should be a “point of reference; we should not underestimate the damage or the opportunity to create new, better schools.”

After Katrina, a state-appointed board shut down New Orleans schools, fired over 7,000 teachers, and deposed the school board. Today, 100 percent of schools in New Orleans have been converted to privately operated charter schools.

Rachel Cohen, writing for the Intercept, described the bill as “vague,” a weakness that could invite the types of fraud and corruption that have dogged charter schools wherever they go. Cohen also noted Keleher had sought the advice of U.S. Secretary of Education Betsy DeVos, a charter school advocate, to help craft the bill.

Analysts at the National Education Association had similar concerns, saying the law “left unanswered” whether for-profit companies would be allowed to manage charter schools and whether charter schools would have to serve students with disabilities — services needed by 40 percent of the island’s students.

Teachers registered their opposition to the bill by holding a one-day strike that shut down schools across Puerto Rico.

“Teachers have had big problems with the education secretary the governor hired,” says Ortiz-Castillo. “We suggested from the very start that she be investigated. We could see that money intended for school children wasn’t arriving in the classroom.”

Teachers had good reasons to be suspicious.

After justifying her call for closing schools by claiming a savings of $7 million, Keleher signed a $16.9 million contract with the California-based Josephson Institute of Ethics to teach “values” in Puerto Rican schools — an addition to the curriculum teachers believed was not needed, especially at a time when students didn’t have adequate supplies of basic materials and textbooks.

After the storm, Keleher barnstormed the island in a relentless marketing campaign to promote charter schools at a time when, according to a survey conducted by the teachers’ union, dozens of schools still had moldy classrooms, leaky roofs, unusable bathrooms, and rat infestations.

Keleher’s intention to redirect education funds to private enterprises seemed all the more obvious when the island opened its first new charter, a comparatively gleaming facility where teachers had smaller class sizes but were being paid $13,000 more than average teacher salaries. The fact that much of the school’s funding was being provided by a nonprofit did nothing to offset the resentment many teachers felt.

“Bringing charter schools to Puerto Rico is not a good thing,” says Ortiz-Castillo. “Charter schools are a way for politicians to redirect money to their friends. The money for the school should go to the school and to the children.”

The backroom collusion between the Rosselló administration and those connected with charter schools continued even when Keleher decided to resign earlier this year.

As part of her departure, her consulting company received a contract to work with a law firm assisting parties interested in participating in the establishment of charter schools in Puerto Rico. The firm also employs Governor Rosselló’s brother Jay Rosselló, who serves as “contact person” to receive the requests for advice.

The law firm’s relationship with Keleher dates back to 2017 when the Puerto Rico Education Department under her leadership hired it for legal advice and technical assistance in education policy.

Keleher’s apparent propensity to steer public dollars to friends, however, seems to have finally caught up with her.

Days before the general strike would shut down the island and force out the governor, news outlets reported Keleher had been arrested for steering $13 million of education federal money to unqualified, politically connected contractors. She is alleged to have bypassed official bidding procedures to award contracts to her friends and to have committed money laundering and fraud.

In her statement calling on Rosselló to resign, Weingarten declared, “Rossello and Keleher ignored repeated requests from the Asociación de Maestros de Puerto Rico and the AFT to use federal recovery money to fund and restore public education on the island” and instead “diverted much-needed funding from public schools to start charter schools.”

A lesson about democracy

Though Keleher is out of office and Rosselló is likely heading that way, Puerto Rico’s teachers are not about to let up.

According to Ortiz-Castillo, teachers intend to meet with the new secretary of education and demand to hear what changes are being planned for the schools. They also participated in protests against a possible successor to Rosselló, Justice Secretary Wanda Vásques, who has since expressed some reluctance to occupy the position. Rosselló has recently inserted another possible successor into the mix, the island’s former representative to the U.S. Congress Pedro Pierluisi, and it’s not clear, as of press time, how teachers would receive his nomination.

But what Ortiz-Castillo and her fellow teachers want people to understand most is the teachers “demonstrated that, without guns and violence, we can hold politicians accountable to the will of the people. Now, we want voters to be more aware of who they are voting for. Candidates need to demonstrate they’re going to do what’s best for all the people and not just what’s good for themselves or their friends. We also want people to understand they should never give up.”

That seems like a lesson all Americans can benefit from.