Binge the rich! Window-shopping the lives of rich folks, this week on TV

Fox milks our love affair with "Beverly Hills 90210," plus the "Undercover Billionaire" and "Succession" returns 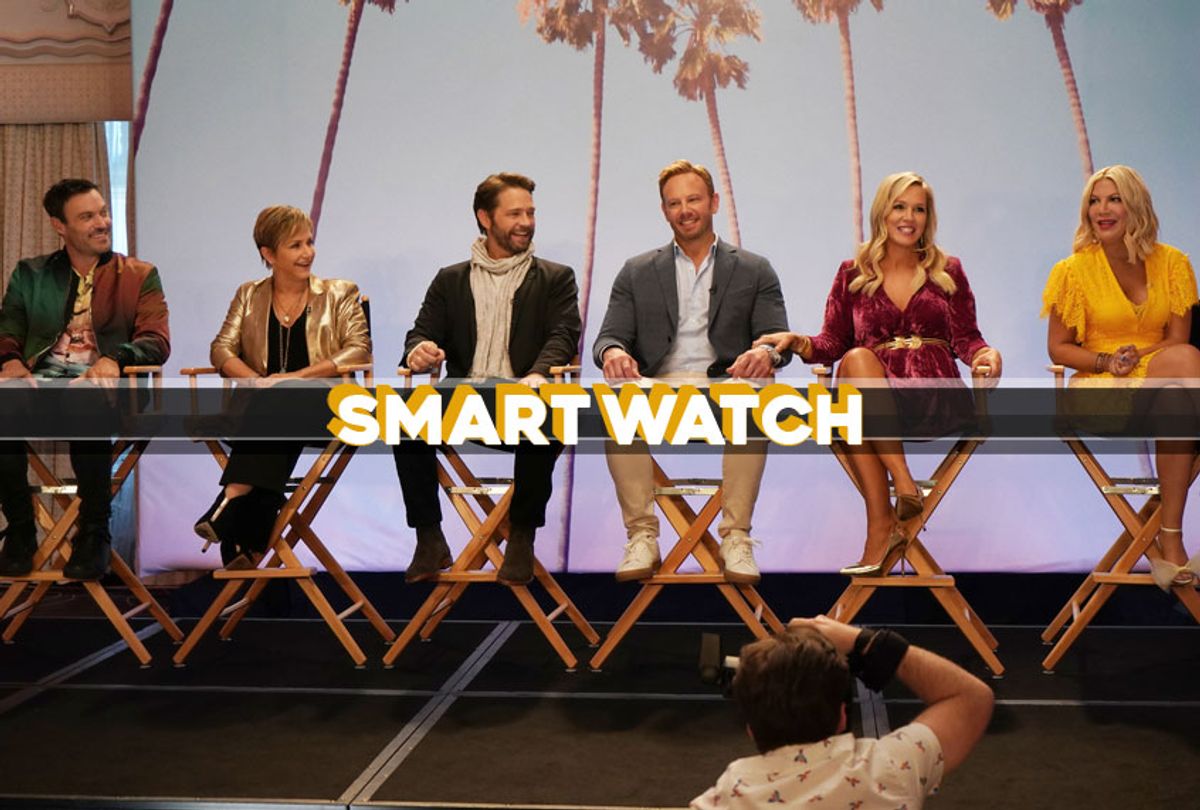 The French call it faire du lèche-vitrines, an idiom that literally translates to “window licking.” Americans know it as “window shopping,” that non-impact sport of desiring that which we cannot or do not have. But when did little barriers like affordability or common sense ever stop us from believing we deserve something, regardless of cost or consequence?

If there’s one area in which Americans are experts, it is borrowing against the future to satiate present desires. We want, we shop, therefore we are. Never mind the bills, since our own personal payday is always just around the corner. Sometimes fate is a Vegas slot machine, always promising that jackpot is just another wasted dollar away…no, the next one…definitely now, it’s prepped to pay off now...

Barring that, there’s always a croissant and the freedom to stare at the jewels in the Tiffany’s window.

This national habit explains much of our continued fascination with the as-seen-on-TV version of the rich. We loathe them and want to be them in equal measure. Money would solve so many of the common person’s problems, after all, even if an abundance of it creates other difficulties.

This is one explanation for the wide and ageless devotion to the original “Beverly Hills 90210” and the built-in excitement for “BH90210,” the meta-mockumentary scripted series that provides one answer to what would happen if the gang got back together.

In the same way that the first series gave viewers a heightened glimpse into the world of rich kids, making them relatable by taking on issues including rape, substance abuse, mental illness and even cancer, this new whatever-it-is dangles the promise of answering, after a fashion, all the “whatever happened to…” and “what if” questions lingering in the deep memories of its fans.

The “whatever happened to” part is an easier lift, since Jason Priestley, Shannen Doherty, Jennie Garth and Brian Austin Green appear in front of the camera with varying degrees of regularity and prominence. Gabrielle Carteris serves as the current SAG-AFTRA President, a position that’s been keeping her very busy in the era of #MeToo and renewed conversations about inclusion (and is contending with a legal conflict).

And people who aren’t old enough to have seen “Beverly Hills 90210” when it was in production are more likely to know Ian Ziering as the star of “Sharknado” than as Steve Sanders.

Aaron Spelling’s teen soap has never completely faded from view, either. It’s been spun-off via “90210” on The CW and countless series exhibit its influence, including The CW’s “Riverdale,” the drama that once co-starred the late Luke Perry, still beloved as Dylan McKay.

Ergo, Fox knows that millions are wired to receive any iteration of the beloved title, and that’s why it’s milking its moment by keeping as much about this not-quite-typical reunion under wraps until the Wednesday night debut.

Honestly, if “Bill and Ted” can wheeze into 2019 and not miss a beat, why not Brandon, Brenda, Donna, Kelly, Andrea, Steve and David? It’s not as if most of the remaining actors are terribly busy with other projects. Even Ziering probably could use a bit more bulk to his resume.

None of them has significant incentive to sign on for an ongoing series, as far as we know; I’m guessing some of the fictional plot may hint otherwise. It also seems to heavily focus on Spelling, who had a healthy run as a reality star for a few years, or Garth, who co-created this heightened reality along with executive producers Chris Alberghini and Mike Chessler. But a person can’t fault them for running with a fun speculative tale providing fans with one version of what might happen to the cast nearly 30 years after the first series debuted, a good deal more sun-weathered and perhaps still hopelessly devoted to one another.

Then again, some of that had to have been acting, and that presumption just makes me more curious.

For many people, the current version of the American dream doesn’t involve a house with a two-car garage and a dog. It’s at once more modest and insanely ambitious: ask most people what their ideal economic situation would be and they’d answer, “comfortable.”

Enter Glenn Stearns, the eponymous billionaire in this series who firmly believes he can walk into a modest town — this one being Erie, Pennsylvania — and, armed with nothing but $100 and cut off from his contacts and massive wealth, build a multi-million dollar company out of thin air in 90 days.

From what Stearns recently told critics attending a press conference for the show in Los Angeles, the show’s pitch comes from an inspiring place. He revealed that nearly five years ago he was diagnosed with cancer. “All of a sudden, my life flashed before my eyes, [and] I thought when I felt the most alive was when I was going through struggle and pain and adversity in my business,” he said.

After that storm has passed, he decided to go through the same adversity and see if he could succeed again. This time millions of people get to watch him do it.

Stearns and Discovery are tapping in to the Horatio Alger bootstrapped version of America, in which every person has equal opportunity and access to resources, and can become successful if they only use the same principles, methods and processes that made Stearns so wildly successful. The production shares the text of said practices and philosophies during each episode, giving it a whiff of an overnight infomercial.

However, the stated challenge also invites an element of curiosity for people given to viewing a show like this with skepticism — which, honestly, everyone should, even people who may find some of Stearns' advice helpful. The premise oozes with reality TV artifice.

And yet, a show like this also plugs into the entrepreneurial spirit that draws audiences to a series like “Shark Tank,” which proves anyone is just one invention (and a lot of creativity and hard work) away from that mythical state of "comfortable," where anything behind a shop’s window glass is within reach.

Right now if you wanted to, you could learn a whole lot about Roger Ailes by way of Russell Crowe’s portrayal on  Showtime’s “The Loudest Voice,” currently pulling into the home stretch of its seven episode season. Its finale debuts on the same night as this series’ second season premiere, in fact.

If you’re looking for time investment advice, though, this dark comedy might make you feel better about your anonymity and the sanity of being aware of mundane bothers like the electrical bill. “Succession” also follows a family at the center of a media dynasty, the Roys, and kindly serves its audience vicarious thrills even as it promotes the notion that you would not ever want to be these people.

As hyper-wealthy clans go, the Roys are an extraordinary mess. The second season picks up with the children of Logan Roy (Brian Cox) gawking at debacles that have left a couple of bodies in their wake, with the messy Kendall (Jeremy Strong) and the opportunistic Roman (Kieran Culkin) angling not only to restore or retain their power but possibly to stay out of jail and the headlines.

Meanwhile Shiv (Sarah Snook) has married her idiot Tom (Matthew Macfayden), who now knows she’s cheated on him but may be smart enough to know that staying married to a gazillionairess might be the best therapy for a lummox like him to heal his pain.

The lesson here is that not everything is worth coveting, but it’s a heck of a lot easier to contend with bad gambles and disappointments if you own the casino.