Yes, "open borders" is a right-wing talking point — but it's leaching into the mainstream

Julián Castro is right: No one is proposing "open borders." Jeh Johnson and the media are falling into Trump's trap 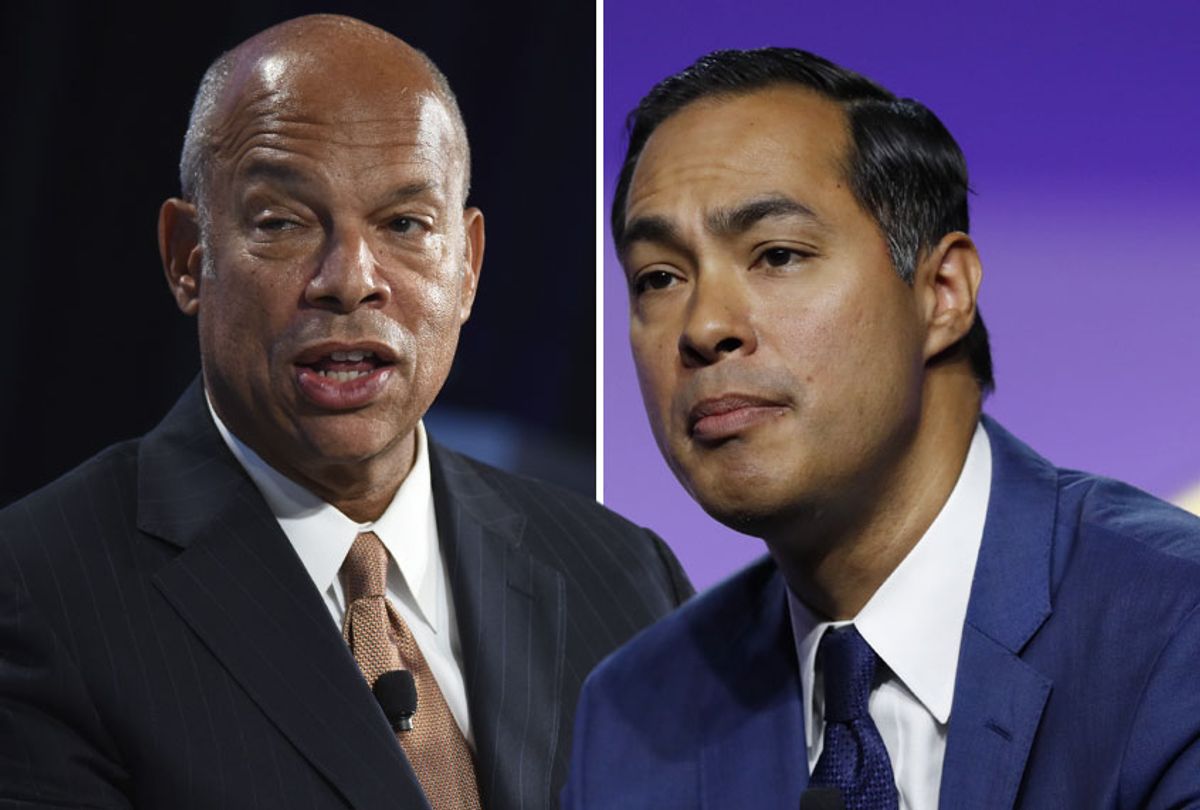 Former HUD secretary Julián Castro was right to bristle on Wednesday night when a CNN debate moderator’s question implied that his proposal to decriminalize undocumented immigration would effectively lead to open borders.

The question cited an influential Washington Post op-ed earlier this month by Jeh Johnson, who served as homeland security secretary under President Obama, in which he likened decriminalization to “a public declaration … that our borders are effectively open to all.”

Since then, Johnson’s words — unrebutted — have been repeatedly cited by the political press corps, the result being that news reports increasingly conflate decriminalization with “open borders” — a politically toxic phrase that Trump and others wield like a club.

But they are not, in fact, the same thing.

The Democratic candidates themselves are somewhat to blame for this confusion, because they have not brought a whole lot of clarity to their plans to maintain a secure border.

That’s because rather than talk about securing the border — a benign concept that Trump has nevertheless weaponized into a de facto attack on nonwhite immigrants — the presidential candidates are tightly, and not inappropriately, focusing on the most immediate moral crisis, which is the inhumane separation of families at the border by the Trump administration.

(There’s also some continued confusion over the candidates’ opposition to deporting undocumented immigrants unless they have committed a crime, and whether that would apply to anyone who makes it to this side of the border, or just to long-time residents.)

Sen. Cory Booker provided arguably the best explanation yet of the position most of his fellow contenders take, after former Vice President Joe Biden said he didn’t agree that immigrants should be told “you can just cross the border.” Instead, Biden said, “if you cross the border illegally … it’s a crime.”

Well, first of all, I just want to say, again, tonight, we are playing into Republican hands who have a very different view, and they’re trying to divide us against each other. I’m listening to the language of my colleagues. No, Mr. Vice President, we are not going to just let people cross the border. An unlawful crossing is an unlawful crossing, if you do it in the civil courts, or if you do in the criminal courts.

Considering it a crime, however, “is giving Donald Trump the ability to truly violate the human rights of people coming to our country,” Booker said.

And so, doing it through the civil courts means that you won’t need these awful detention facilities that I have been to; seeing children sleeping on pavement, people being put in cages, nursing mothers, small children.

This is not necessary. We have seen, using the civil system, piloted programs that have 100 percent compliance with the civil courts, where people are evaluated. If they have no justifiable reason to be here, they are returned.

Castro explained further by referring to a piece of federal law that has become controversial:

The only way that we’re going to guarantee that we don’t have family separations in this country again is to repeal Section 1325 of the Immigration Nationality Act. That is the law that this president, this administration is using to incarcerate migrant parents and then physically separate them from their children.

That does not mean, Castro concluded, that the border is simply open to all comers, with no consequences:

There’s still going to be consequences if somebody crosses the border. It’s a civil action. Also, we have 654 miles of fencing. We have thousands of personnel at the border. We have planes; we have boats; we have helicopters; we have security cameras.

Practically speaking, the government would still try to prevent unauthorized border crossings. If people do get across, rather than treating them as criminals, the government would begin a civil process. New arrivals would initially be released, but unless they qualify for some form of legal protection, such as asylum, would ultimately be subject to deportation.

There would be no guards, no fencing, and no impediments of any kind. Anyone who wants to cross the international boundary — for any reason, and with whatever intent — could do so. It would be like it was before May 28, 1924, the date that the U.S. Border Patrol was formed: Come one, come all.

By contrast, almost all the Democratic presidential candidates — including Booker, Castro, Sen. Kamala Harris, Sen. Bernie Sanders and Sen. Elizabeth Warren – are on the record in favor of increased funding for secure borders, having responded affirmatively to the Washington Post survey question “Do you support increased border security funding, including new screening equipment at ports of entry and additional resources to process the recent increase of asylum seekers?”

None of them advocate dismantling the gigantic government apparatus that protects the southern border. Even those who want to eliminate ICE want to do so because of its moral failings, redistributing rather than eliminating its responsibilities.

But like so many of Trump’s other easy-to-remember catchphrases, “open borders” has become acceptable journalistic shorthand.

So Jonathan Martin, in a New York Times story earlier this month, wrote that Democratic governors gathered at a private retreat on Nantucket were “warning 2020 candidates that their support for decriminalizing illegal migration would allow Republicans to cast Democrats as the party of open borders.” He didn’t address how that would be a misrepresentation.

Even when Gov. Michelle Lujan Grisham of New Mexico told Martin that advocating for decriminalization “just scares too many people who don’t know anything about immigration,” he cited that as evidence that it was bad politics, rather than as a challenge to address public ignorance.

New York Times reporter Stephanie Saul interviewed Democratic voters in Racine, Wisconsin, this week, which offered a pleasant departure from the Trump-supporters-still-support-Trump genre. But the central theme of her story was that folks there are freaked out about the presidential candidates’ embrace of — you guessed it! — open borders.

Saul cited Jeh Johnson's statement that decriminalization was “tantamount to permitting open borders.” Then, accepting that on face value, she continued: “Since then, another candidate, Senator Cory Booker of New Jersey … said he would virtually eliminate immigration detention.”

[T]he bigger clash was over whether border crossing should be a crime. That plays into the hands of Mr. Trump and Stephen Miller, the chief architect of his immigration policies. Both have repeatedly accused Democrats of being members of the party of open borders, an attack that is certain to be at the center of the president’s 2020 re-election campaign.

Trump, of course, has long accused Democrats of supporting open borders, since well before Castro’s advocacy made decriminalization a party priority.

Some day, one party or another may actually support open borders. There are actually powerful arguments in favor of such a position, based on migration patterns and climate change. But it’s not happening now, and no one currently running for president has proposed it. Responsible journalists should not adopt the framing of Trump’s tweets.