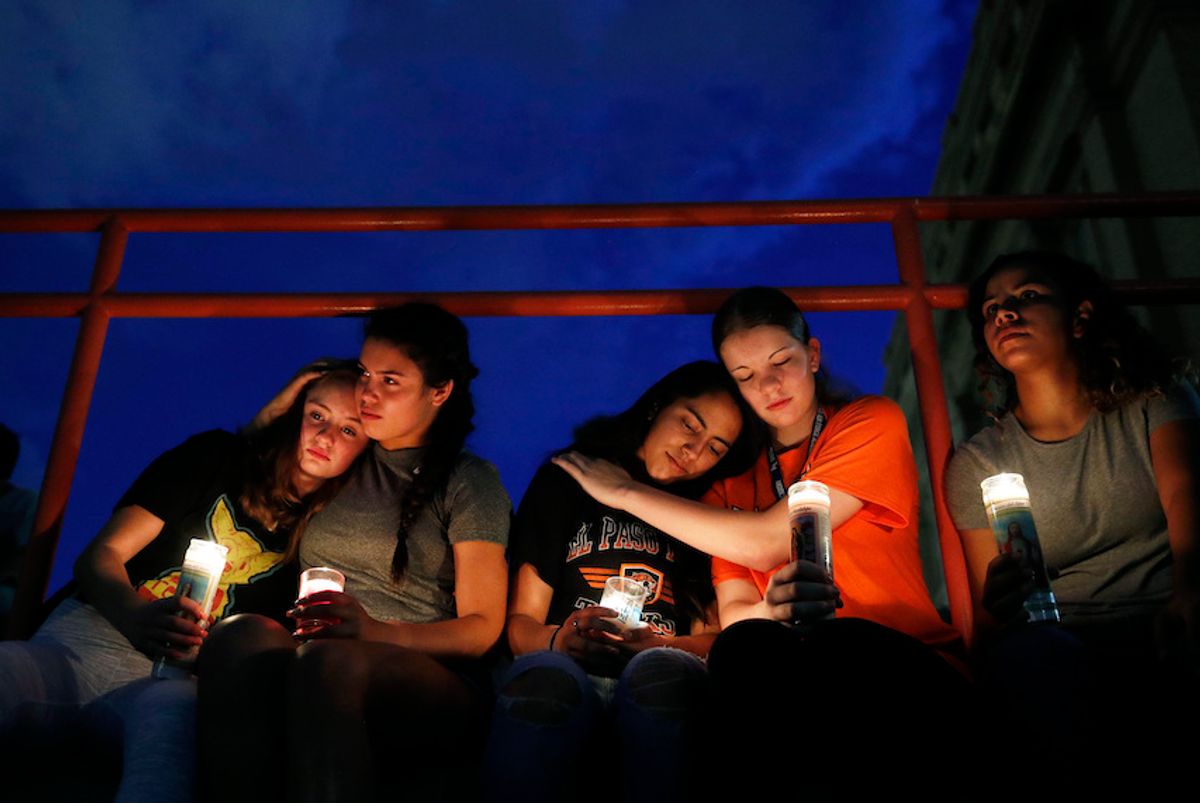 From left, Melody Stout, Hannah Payan, Aaliyah Alba, Sherie Gramlich and Laura Barrios comfort each other during a vigil for victims of the shooting Saturday, Aug. 3, 2019, in El Paso, Texas. (AP/John Locher)
--

Police have identified the suspect in a mass shooting at an El Paso Walmart on Saturday as a 21-year-old white male who may have posted a racist manifesto minutes prior to the shooting in which he denounced "the Hispanic invasion of Texas."

Law enforcement officials believe it was Patrick Crusius who perpetrated a mass shooting late on Saturday morning at the Walmart near the Cielo Vista Mall in the majority-Latinx city of El Paso, according to The New York Times. Authorities also said that at least 20 people have died and 26 others have been wounded as a result of the mass shooting, which occurred at a time when the store was packed.

"Texas grieves for the people of El Paso today. On a day that would have been a normal day for someone to leisurely go shopping, [it] turned into one of the most deadly days in the history of Texas," Gov. Greg Abbott told reporters. At a press conference he also failed to identify lax gun laws as a source of the problem, instead arguing that "responding to a situation like this to try to make sure that it doesn't happen again is a replication of what we just went through during the last legislative session," referring to a shooting last year at a high school in Santa Fe, and insisted that "I can tell you that perhaps the most profound and agreed-upon issue that came out of all of those hearing was the need for the state, and for society, to do a better job of dealing with challenging mental health-based issues."

While it is unclear if the alleged perpetrator had mental health issues, a manifesto that he purportedly wrote unambiguously linked the attack to a racist agenda against Latinx immigrants. It began with the racist and xenophobic statement, "In general, I support the Christchurch shooter and his manifesto. This attack is a response to the Hispanic invasion of Texas," according to The New York Times. The Christchurch shooting suspect, Brenton Tarrant, committed a pair of mass killings directed against Muslims in New Zealand in March.

The title of the manifesto in question was "The Inconvenient Truth" and it vilified Latinx immigrants, arguing that "if we can get rid of enough people, then our way of life can be more sustainable." It argued that Democrats were embracing the Latinx community in order to become a permanent majority and bemoaned that "the heavy Hispanic population in Texas will make us a Democrat stronghold." The author also insisted that "my opinions on automation, immigration, and the rest predate Trump and his campaign for president."

The document wasn't signed and its direct role in the shooting has not been confirmed, but police are looking into the manifesto for clues about the alleged perpetrator's motives. If the manifesto is conclusively proved to have written by Crusius, the Saturday shooting may be classified as an incident of domestic terrorism or a hate crime. It would join the much longer list of mass shootings committed by far right terrorists in recent months.

BuzzFeed News reporter Jane Lytvynenko identified a considerable amount of disinformation about the alleged shooting as reports came out about the event. These included far right social media accounts identifying the shooter as "antifa," Breitbart claiming the shooting was "gang-related terrorism" or claiming that there were multiple shooters.

President Donald Trump also posted several tweets about the El Paso shooting after it occurred, including one saying "Terrible shootings in ElPaso, Texas. Reports are very bad, many killed. Working with State and Local authorities, and Law Enforcement. Spoke to Governor to pledge total support of Federal Government. God be with you all!"