The breakout comedy set in Northern Ireland in the '90s, now in its second season, is unexpectedly poignant now 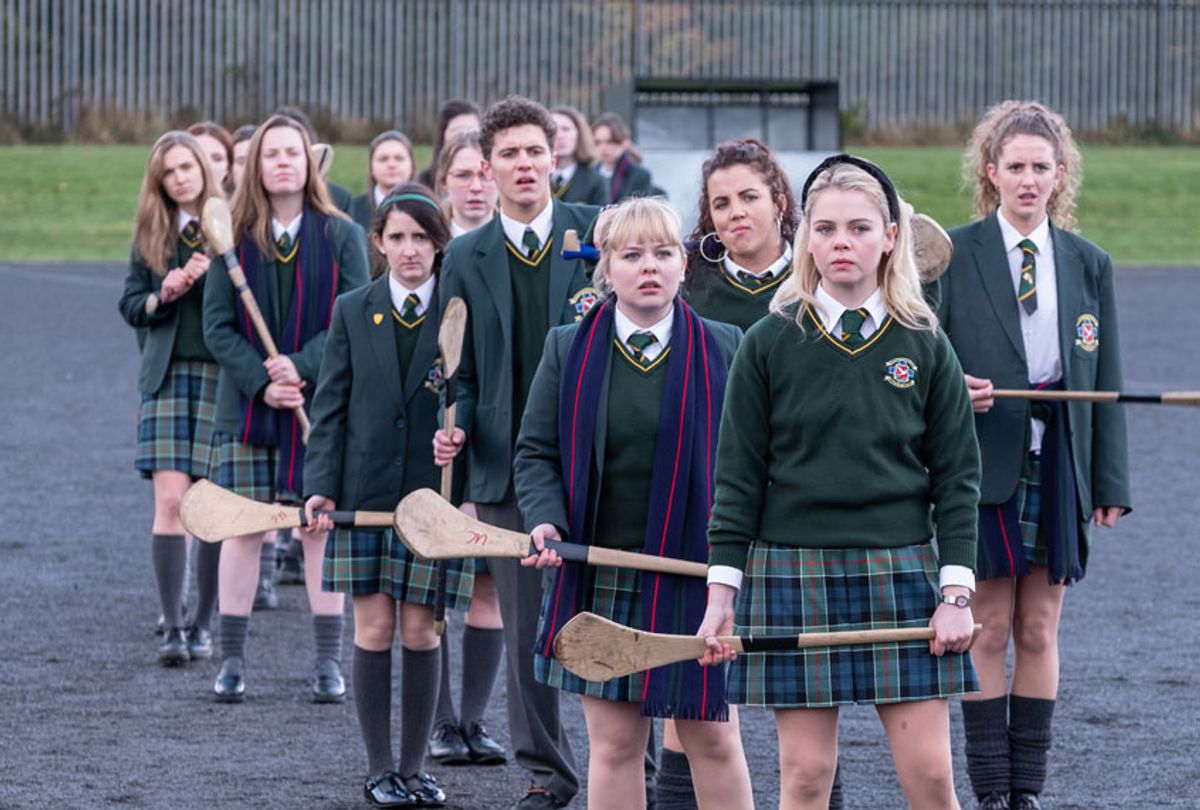 Five teenagers — four girls and a boy — are packed into the back of a bus heading for Belfast, Ireland. “What’s in the suitcase, Michelle?” one asks. “Vodka,” she responds. It’s 1995, they’ve snuck out of the house with concert tickets to see “Take That,” and are ready to party.

That is until Sister Michael, a stern nun who teaches at their school, Our Lady Immaculate, boards the bus, too. Panic, and subsequent shenanigans, ensue. This is the plot of “Episode Three” from the second season “Derry Girls,” a breakout comedy that is now streaming on Netflix.

“Derry Girls” is a sitcom originally created by Northern Irish playwright Lisa McGee for Britain’s Channel 4. It’s based loosely on McGee’s experiences growing up in Londonderry, Northern Ireland, in the early 1990s. It’s a fit for viewers who enjoyed “PEN15” or “Big Mouth,”: fast-paced, heartfelt and delightfully cringey in its exploration of adolescence.

The teens on the bus are the show’s main characters. There’s Erin (Saoirse-Monica Jackson), who sometimes dreams of a life bigger than that in Derry, and her oddball cousin Orla (Louisa Harland). They are close with do-gooder Clare (Nicola Coughlan), rule-breaker Michelle (Jamie-Lee O’Donnell), and Michelle’s English cousin, James (Dylan Llewellyn).

They gently rebel against their school’s disciplinarian nuns, like Sister Michael, and their devoutly Catholic parents who are waiting for them at home. And together, they get into typical puberty-fueled antics: preparing for prom, thinking about sex, learning how to apply winged eyeliner, making pot edibles (scones, not brownies — this is Ireland, after all).

But in the background of these familiar high school escapades is a period of political violence and unrest that ramped up in the 1960s with civil rights protests and demonstrations on behalf of the Catholic minority and escalated into sectarian violence.

“[A] particular protest in Northern Ireland on Oct. 5, 1968, signaled the beginning of something that endured for three decades, seeding an insurgency that became known with weary understatement as the Troubles,” wrote The New York Time’s Alan Cornwell in his piece, “50 Years Later, Troubles Still Cast ‘Huge Shadow’ Over Northern Ireland.”

He continued: “From then until a settlement known as the Good Friday Agreement was signed in 1998, some 3,600 people died in conflict that had all the appearances of civil war, with roadblocks and bomb blasts, sniper fire and the suspension of civil rights.”

Throughout “Derry Girls,” the gang’s desire to do the normal things teenagers do is not only at odds with their parents conservative religious beliefs, but with their justified fear of the violence that had engulfed their community.

In “Episode One” of season one, we open as Erin and Orla are preparing for their first day of school. While Erin is concerned about being an “individual” this school year — which translates into trying to inconspicuously trade out her uniform blazer for a denim jacket — her parents are worried about the threat of a bridge bombing outside of town. When the teens’ bus is stopped at a checkpoint en route to school, and two armed soldiers board the bus. Michelle is excited.

“Do you think if I told him I had an incendiary device down my knickers he’d have a look?” Michelle asks. “Ach, some of them are rides. I’m willing to admit it.”

But viewers get the sense that for the rest of the students, this is business as usual. They yawn and look out the window until the inspection is over. The Troubles have been raging for 30 years. This is all they’ve ever known.

While decades-long political unrest in Ireland and America’s current climate of rampant mass violence aren’t identical situations, there are distinct parallels that make the show, the second season of which was released on Friday, all the more poignant.

In August 2018, The Atlantic published an article, “School-Security Companies Are Thriving in the Era of Mass Shootings.” That year, the Washington Post reported in a piece that posed the question “Do metal detectors and X-ray machines belong in schools?” that every middle and high school in the District’s traditional public school system now has metal detectors and X-ray machines. Practice lockdowns and active shooter drills are commonplace in many classrooms, even for students as young as preschoolers.

Like the characters of “Derry Girls,” for many students, this is all they’ve ever known; and like those characters, I think we can all relate to longing for the ability to carry out our daily lives — going to summer festivals, running errands on the weekend, going out with friends — without fearing for our lives.

And yet. Over the weekend, the hashtag #itsgettingtoohardto began trending on Twitter. Users wrote things like, “#itsgettingtoohardto to go anywhere without the fear of being shot, let's face it you can't even take a kid to Walmart without paranoia,” and “#itsgettingtoohardto get ready to send my kids back to school and to go back to working in a school when we don’t feel safe because of gun violence in America.”

The satire and humor website McSweeney’s re-shared an article from January 2018, “I Don’t Mean To Be Difficult, But I Really, Really Don’t Want To Get Shot.”

“[My friends] tell me that everybody’s being shot by guns nowadays — people who go to Bible study, people who go to work because they need money to live, people who play with blocks in second-grade classrooms,” Cara Michelle Smith writes. “My friends tell me that it’s actually pretty self-righteous to think I won’t ever get shot by a gun, so I might as well suck it up, go to a rock concert or a high school and just get shot already.”

“List of mass shootings in the United States in 2019” has its own Wikipedia page. The Gun Violence Archive, a nonprofit that tracks gun violence in the U.S., says there have been 33,028 total shooting incidents in 2019 as of Sunday, resulting in 8,734 deaths and 17,308 injuries. It’s a sickening, demoralizing reality.

In the second season opener of “Derry Girls,” Erin is pretending to be interviewed for a news program and says: “For generations, we’d known nothing but violence, nothing but hatred. But finally we’re saying enough is enough.”

"Enough is enough": It’s a refrain that’s ever more common in the wake of violent tragedy in the United States, and for that reason, parts of “Derry Girls” cut deep to this American viewer in an unexpected way.

Some topical shows explore events that hit maybe too close to home to feel enjoyable now — some former fans found “The Handmaid's Tale,” with its dystopian reproductive oppression, hard to keep watching, for example, while others quit “Orange Is The New Black” after one character's violent death. But being a period piece, "Derry Girls" doesn't have to stand in for current news cycle trauma — its placement in history stands on its own. It's also buoyed not only by the resilience and optimism of its adolescence protagonists but also by a tangible sense of hope, thanks to the viewer's knowledge that the Good Friday Agreement will happen, that this particular streak of violence, shaping this coming-of-age story at least, does have an end.