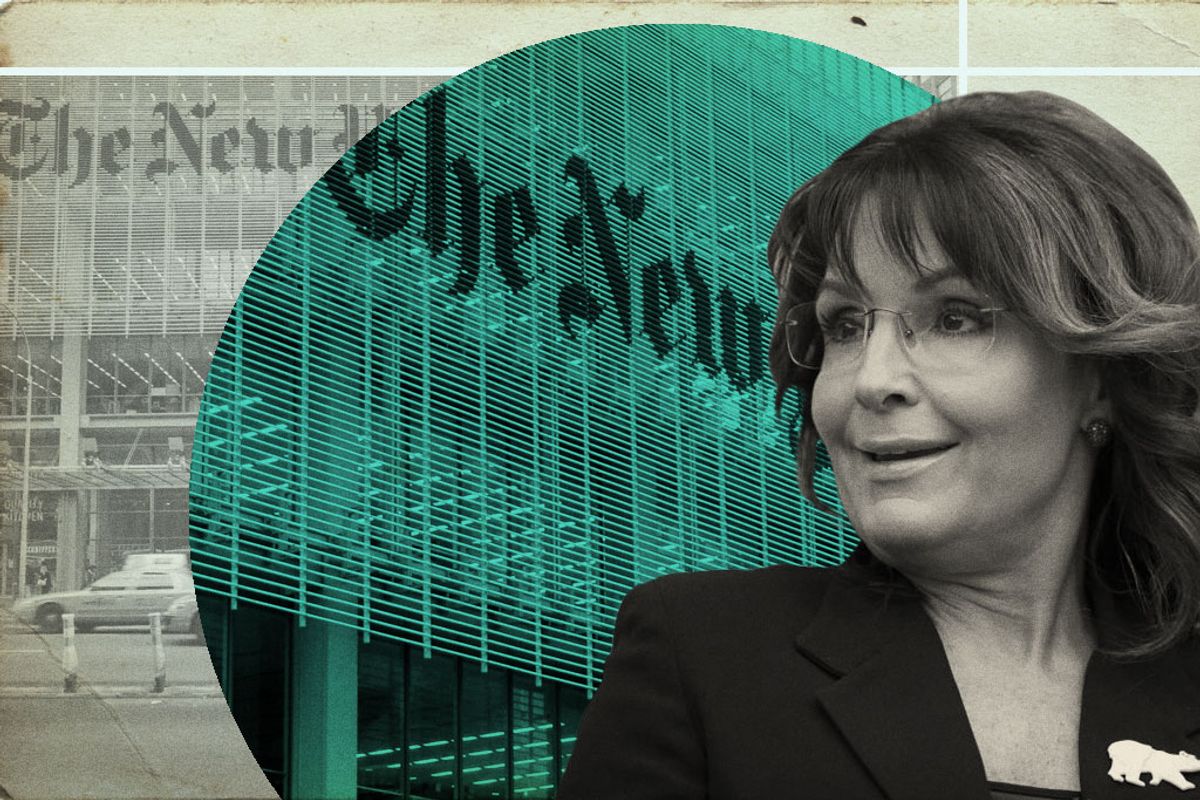 Sarah Palin's defamation lawsuit against The New York Times was revived on Tuesday, roughly two years after a lower court judge dismissed the case, giving the former governor of Alaska another chance to face off with the paper of record.

In a 3-0 decision, the Second Circuit Court of Appeals in Manhattan ruled that District Court Judge Jed Rakoff, who tossed out Palin's lawsuit in August 2017, had "erred in relying on acts outside the pleadings to dismiss the complaint."

The court said it further concluded that the amended complaint from Palin, who was also Republican nominee John McCain's running mate in his 2008 presidential bid, "plausibly states a claim for defamation and may proceed to discovery."

The appeals court sent the case back to the district court for "further proceedings consistent with" its opinion.

Circuit Judge John Walker said also said Palin had plausibly claimed that The Times defamed her, though she still bore the "high" burden of showing that the Gray Lady acted with "actual malice" toward her.

"We are disappointed in the decision and intend to continue to defend the action vigorously," The New York Times said in response to the panel's decision.

Palin sued newspaper for libel in 2017 over an editorial that mistakenly linked Palin's political action committee — SarahPAC — and a 2011 shooting in Tucson, Arizona, in which six people were killed and then–Rep. Gabrielle Giffords, D-Ariz., was severely wounded.

The editorial, published online on June 14, 2017 — the day of another political shooting, this one in Alexandria, Virginia at a practice for a congressional baseball game — argued that the gunman who carried out the Tucson massacre was incited by a map circulated by SarahPAC, which "put Ms. Giffords and 19 other Democrats under stylized cross hairs."

There is no evidence that the Tucson gunman saw the map or that he was motivated by it. The Times issued a correction the next day amid backlash and removed phrases suggesting a link between Palin and the Tucson shooting. It also clarified that the SarahPAC map depicted crosshairs on Democratic congressional districts — not the lawmakers themselves. Palin filed her suit two weeks later.

Circuit Judge John Walker, writing on behalf of the three-judge panel, began his opinion by stating, "This case is ultimately about the First Amendment, but the subject matter implicated in this appeal is far less dramatic: rules of procedure and pleading standards."

He wrote that Rakoff had strayed from procedures by relying on an evidentiary hearing with the editorial's author, James Bennet, to make his decision last summer.

"It is clear to us that the district court viewed the hearing as a way to more expeditiously decide whether Palin had a viable way to establish actual malice," Walker wrote in the 21-page opinion. "But, despite the flexibility that is accorded 6 district courts to streamline proceedings and manage their calendars, district courts are not free to bypass rules of procedure that are 8 carefully calibrated to ensure fair process to both sides."

He said Rakoff should have relied on legal documents when deciding whether Palin could sufficiently prove actual malice, rather than "inferences" drawn from Bennet's testimony at a hearing that ran "headlong" into federal court rules.

When Rakoff threw out Palin's lawsuit and ruled in favor of the Times, he wrote, "Nowhere is political journalism so free, so robust, or perhaps so rowdy as in the United States. In the exercise of that freedom, mistakes will be made, some of which will be hurtful to others."

Walker, in his opinion, rejected the Times's view that Palin — at most — showed that Bennet made an "unintended mistake" by including "erroneous facts" about the politician in the editorial. He argued that even if Bennet made an unintended mistake, "it is not the district court's province to dismiss a plausible complaint because it is not as plausible as the defendant's theory."

"The jury may ultimately agree with the district court's conclusion that Bennet was credible — but it is the jury that must decide," he continued. "Therefore, at the pleading stage, we are satisfied that Palin has met her burden to plead facts giving rise to the plausible inference that Bennet published the allegedly defamatory editorial with actual malice."

The three-judge panel said that Palin's lawsuit "plausibly states a claim for defamation and may proceed to full discovery."