Donald Trump tells his cult-like devotees that if they fail to keep him in power, it is the end of America 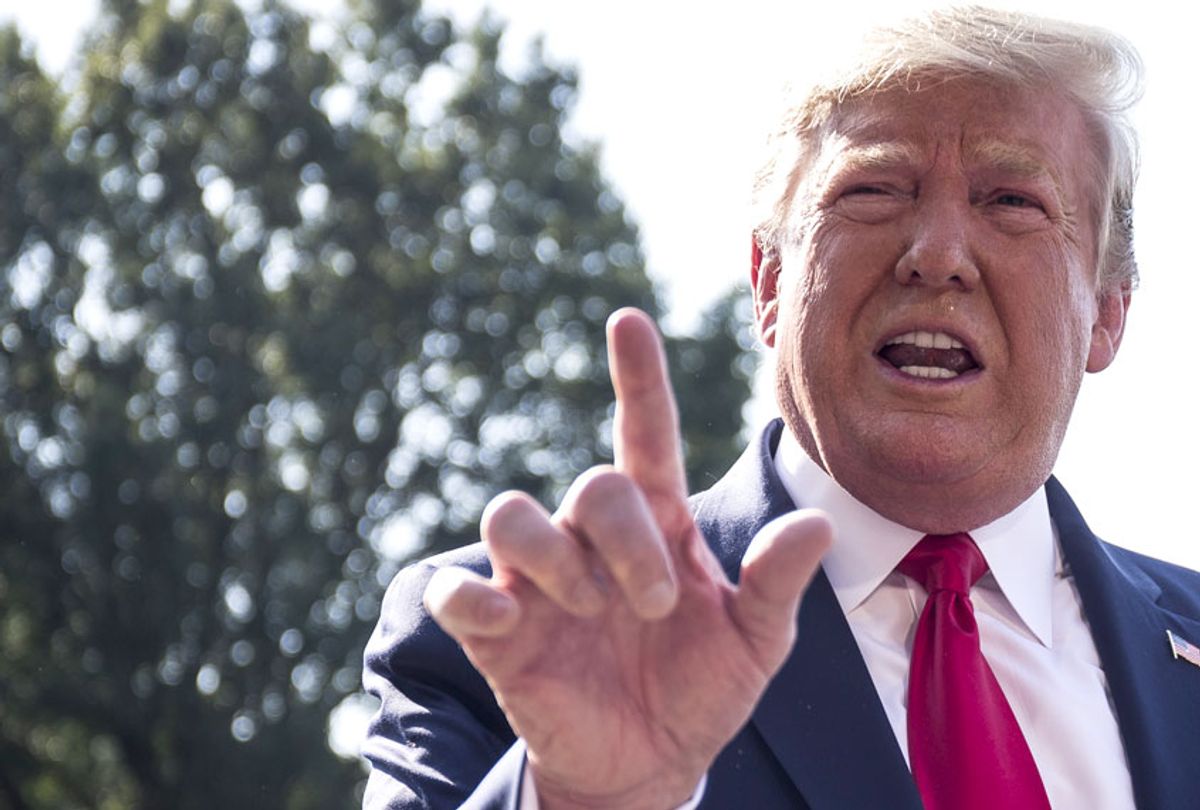 The debate over whether Donald Trump is racist or not has been an absurd distraction from reality, which is that he has been stirring up the most virulent strain of anti-immigration hysteria there is: he’s not only asserting an invasion by dangerous people with dark skin, he’s saying it poses an existential crisis to white America.

The white nationalist who opened fire on Latino families at an El Paso Walmart over the weekend was a believer. He described being caught up in something more powerful than himself. “I am simply defending my country from cultural and ethnic replacement brought on by an invasion,” he wrote in a manifesto posted on 8chan.

Feeling like a heroic defender of America is a key element of Trumpism, and goes a long way toward explaining why his supporters are so enthralled. The biggest way he riles them up is by being hyperbolic about the stakes. Giving power to the Democrats, allowing in more immigrants — those are not just bad things, they are the end of the country.

He doesn’t get attention because of his charisma; it’s because he’s hysterical. He’s an absolutist (he is the “most” and “least” and “only” person). He doesn’t let facts get in the way (“fake news”). But most of all, he tells his cult-like devotees that if they fail, it is the end of America. “Making American Great Again” has always been about rescuing it from ruination brought about by Obama and people like him.

Just a few weeks ago, Trump told a fired-up crowd in Greenville, N.C.:

That kind of rhetoric dates back to at least 2013, and this Trump tweeted:

And he frequently makes it clear that the biggest threat comes from a flood of brown faces. In New Hampshire, in early 2016, he warned that immigration could have catastrophic consequences:

So what I’m saying is we’ve got to change our ways. We’ve got to be vigilant, we’ve got to be smart. And if we’re not, we’re not gonna end up having a country anymore. We’re just gonna have one big mess. And take a look at what’s happening in Europe. Europe’s got problems. I mean people are talking — literally people are talking about revolution. You look at what’s going on in Germany. We have millions of people pouring in and they’re not assimilating. And I don’t know if they are going to assimilate. And they want Sharia law.

In July 2017, on a trip to Poland, Trump read a speech in which he held up European culture as the epitome of human existence and warned of “adversaries” that threaten it.

We must work together to confront forces, whether they come from inside or out, from the South or the East, that threaten over time to undermine these values and to erase the bonds of culture, faith and tradition that make us who we are. If left unchecked, these forces will undermine our courage, sap our spirit, and weaken our will to defend ourselves and our societies….

We write symphonies. We pursue innovation. We celebrate our ancient heroes, embrace our timeless traditions and customs, and always seek to explore and discover brand-new frontiers.

In January 2018, a leak to the Washington Post made it clearer than ever that Trump doesn’t oppose immigration per se, he just opposes immigration by black and brown people. Trump was said to have asked lawmakers who wanted to protect immigrants from Haiti, El Salvador and African countries, “Why are we having all these people from shithole countries come here?” Then he suggested the US bring more people from countries like Norway.

But Trump’s bluntest comments about the threat to white European culture came in July 2018, before and during a visit to the United Kingdom. In an interview with British tabloid The Sun, he said immigration has changed Europe for the worse and that its leaders need to act quickly or risk irreversible damage:

So I think allowing millions and millions of people to come into Europe is very, very sad. I think you are losing your culture. Look around. You go through certain areas that didn’t exist ten or 15 years ago.

Asked about those comments as he stood next to then-prime minister Theresa May, he acknowledged that he was saying things others wouldn’t, he asserted cultural superiority, he issued a dark warning, and he said Europe and the U.S. were in essentially the same position:

It’s a very sad situation. It’s very unfortunate. But I do not think it’s good for Europe and I don’t think it’s good for our country. We’re, as you know, far superior to anything that’s happened before, but we have very bad immigration laws… It’s the craziest thing anyone has ever seen.

The British prime minister, hardly a liberal, spoke of the benefits of immigration to her country thusly:

The UK has a proud history of welcoming people who are fleeing persecution to our country. We have a proud history of welcoming people who want to come to our country to contribute to our economy and contribute to our society. And over the years, overall immigration has been good for the UK. It’s brought people with different backgrounds, different outlooks here to the UK, and has — and we’ve seen them contributing to our society and to our economy.

Coverage of Trump’s comments was blistering — the Washington Post’s Philip Bump wrote that the argument “that immigration changes existing ‘culture’ for the worse… is a staple of white nationalist rhetoric in the United States.” But in no time at all the media attention had shifted elsewhere.

As groups of refugees made their way from Central America to the southern border to request asylum last year, Trump repeatedly called it an “invasion.” And the way he has treated migrant families with children is nothing short of inhumane — as if their lives don’t matter.

Whether it’s Central Americans, Mexicans, or Muslims, Trump’s message to his supporters has always been that nonwhites trying to live here present a danger to the country.

As for African-Americans, in Trump’s lexicon they are obviously not invaders, but they are still dangerous, if not subhuman. His recent attacks on Baltimore are part of a stream of messaging about Democrat-voting urban areas with large minority populations in which he calls them blighted and overrun by criminals and homelessness.

When he uses the word “infestation” he is referring to black and brown communities.

That explains a lot of what we see at his rallies. His hooting, almost all white supporters are electrified by feeling like part of a reality show that determines whether their white country lives or dies. It brings rapturous excitement to their otherwise mundane lives — like an opiate, only more dangerous to others.

How can one go too far in defense of one’s country? That’s the kind of question Trump’s framing of the issues can lead his supporters to ask themselves. It’s surely something the El Paso shooter asked himself, and answered.