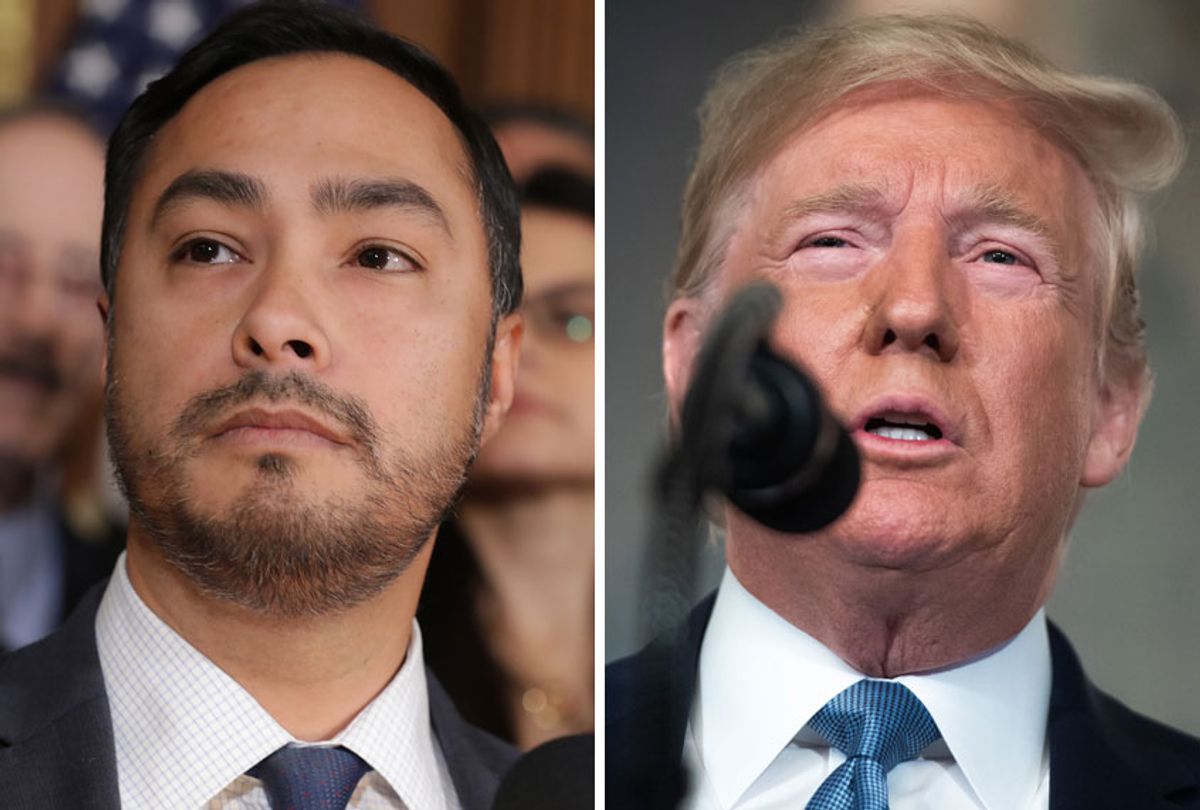 Once it became irrefutable that Donald Trump had colluded with a criminal Russian conspiracy to interfere with the 2016 (even if there wasn't quite enough evidence to charge conspiracy), Trump and his Republican enablers switched tactics. Unable to deny the Russian collusion, instead they leaned on one of Trump's favorite gambits: Whataboutism, a propaganda technique also heavily favored by Russian president Vladimir Putin. The idea of whataboutism is to throw up a bunch of false equivalences and accuse the "other side" of doing what you do, to make it seem like your critics are hypocrites and that everyone is doing the terrible thing you can no longer pretend you didn't do.

In this case, the whataboutism was provided in the form of a bunch of incoherent conspiracy theories around Hillary Clinton paying for some opposition research from a private investigator named Christopher Steele. It required some rather shameless playing dumb from Republicans, who pretended to believe paying someone to legally interview people is the equivalent of working with a foreign government to break American laws, but really the most offensive thing about it wasn't the illogic of it. It's that Republicans, en masse, are defending Trump for literally inviting, instructing and covering up for a criminal conspiracy to undermine our democracy.

It seemed like they couldn't get lower, but in the Trump era, there is always a new low to be reached for. And this time, whataboutism is being employed to defend and normalize Trump using his platform as incitement to mass murder.

To recap, since politics in the age of reality-TV-show-fascism are as complex as they are stupid: On Saturday, a terrorist murdered 22 people at an El Paso, TX shopping mall because, egged on by a white nationalist movement led by Trump, the terrorist believed Hispanics are "invading" the United States and need to be dissuaded through violence.

Efforts to deny the direct line between Trump's rhetoric, as well as his repeated targeting of El Paso specifically, and the terrorist attack have been failing, due to the fact that anyone with two ears and common sense knows Trump and his minions are to blame for this. Unable to deny that Trump's rhetoric is leading to mass murder, and unwilling to admit that it's a bad thing to have a president who repeatedly demonizes people based on race and tacitly encourages political violence, they're moving to the last ditch move, which is to claim Democrats do it too.

Needless to say, the evidence that Democrats, like Trump, incite violence is weak sauce. The straw grasped this time is the fact that Rep. Joaquin Castro (D-Tex.) tweeted out a list of political donors in his area that have given the maximum donation to Trump's campaign. Trump's campaign communications director Tim Murtaugh seized on this, making clearly bad faith claims that this is "inciting violence" and "endangering the safety of the people." And, since so many people are incredibly desperate to normalize Trump's racism and incitement to violence, this talking point is spreading like wildfire.

No one actually believes that Castro did anything wrong, to be clear, and 100% of the outrage is being faked in order to create confusion around the question of whether it's a bad thing that the current president incites racist terrorism.

But on the off chance someone is legitimately confused, let's be clear: Castro did nothing wrong in the slightest. On the contrary, he used a federally managed public database that exists quite literally for the purpose Castro used it for — so the public can know who is using money to influence politics.

In the '70s, a pair of laws requiring campaigns to keep track of and disclose their campaign contributions passed as part of a larger response to the Watergate scandal and a desire to get corruption out of government. The Supreme Court upheld the law in 1976, and interestingly, the complaint was more focused on the contribution limits and not the disclosure laws.

And since then, there's been no real controversy over the easily searchable public database of political contributions maintained by the FEC. On the contrary, right up until this week, it was considered standard journalistic practice to use this database to publicly share the names of important campaign donors.

The need to know who is influencing our politicians is a critical and non-controversial part of politics. Or it was, until Trump needed a justification for his habit of inciting racist violence. Now it's "controversial" and sharing this once completely normal information in exactly the way it was intended to be shared is being equated with whipping up white nationalists until they decide to shoot up a shopping center.

The particulars of the "debate" are frankly unimportant, since it was started in bad faith and being perpetuated by people who are either too stupid to know better or too evil to care. What matters here is not what nonsense Trump and his supporters are throwing up to confuse the issue of whether or not it's wrong for Trump to stoke racism and violence.

What matters is that they are trying to defend Trump, a bigot who regularly goads his supporters to violence with not-joke jokes, and their tactic is to spread the lie that Trump's winking at violence is normal and fine. Because that is what they are doing.

Trump and his defenders know they can't just come out and say they think it's fine that he paints people of color as a threat to the nation. They can't just bluntly say that they don't really object to his egging people on to violence. Then they will be seen as the monsters they are. So they create these fake controversies meant to confuse the issue, distract from the important matters, and, above all else, create noble-sounding justifications for the monstrous choice to support Trump in his racism and his winking endorsements of violence.

That is what matters here: Trump's racist leadership is getting people killed. And anyone who plays along with efforts to confuse the issue is complicit.