Are food trucks the future? Fighting food insecurity and gentrification one stop at a time 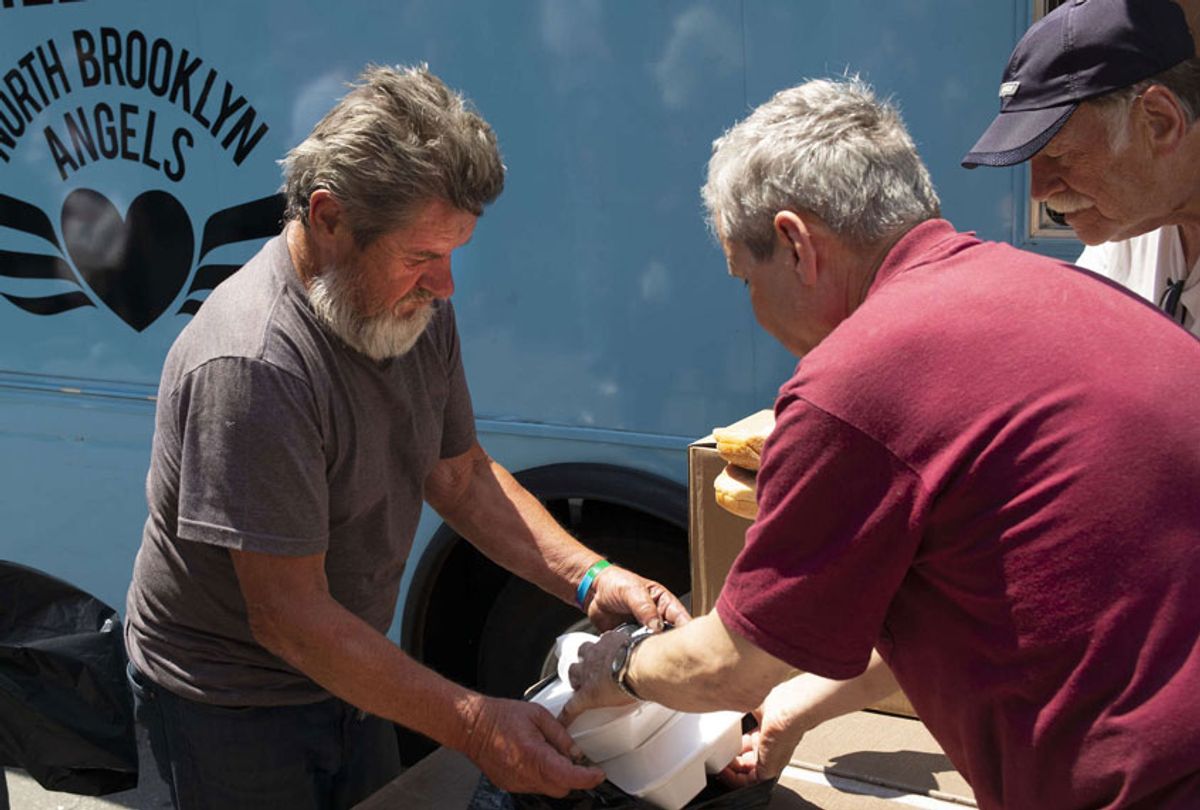 “Just tell ‘em it’s rice,” said Theresa Ortiz, the crew boss in the galley of The North Brooklyn Angels’ (NBA) mobile kitchen on a hot Wednesday afternoon in August. Service was about to begin, and I was running down the menu, reminding myself what was on offer as the line formed outside the robin’s egg blue truck. Lunch was: baked chicken, salad, a sectioned orange and couscous with dried cherries and parsley.

“Rice?” I quizzed Ortiz, who rolled her eyes.

Ortiz has been running lunch service outside St. John the Evangelist Lutheran Church on Maujer Street in Williamsburg, Brooklyn every Wednesday for two years. She grew up on the block and called out a welcome to friends and neighbors as they join the line or approach the service window of this custom-built truck.

"That's Granny," Says Ortiz, pointing out a well dressed older woman relying on a walker. "Her name's Mrs. Johnson. She's 94 years old and on her way to Bingo. She goes every day. Keeps her busy and she loves to win!"

Come service time, Ortiz is all business. The three-person crew has an hour and a half, tops, to serve nearly 200 meals. When one of the volunteers on the line serving the hot lunch into styrofoam trays falls behinds, Ortiz hectors him: Get a move on, wouldya?

North Brooklyn Angels is a volunteer organization that delivers hot lunches to one of five locations each day of the week. All the food is donated, much of it from Rethink Food, a non-profit that prepares meals sourced from unused food from grocery stores, restaurants, events, and corporate offices. The balance is prepared by kitchen coordinator, Tomas Gomez and a rotating crew of volunteers from the basement kitchen of Our Lady of Mount Carmel Church on N.8 St, in Williamsburg. “It’s part of the excitement of the job that both the food and the workforce changes all the time,” Gomez said when I asked how he plans the menu. The truth is that complexity is at the core of the North Brooklyn Angels’ mission.

Because everybody eats, getting folks to volunteer to feed people is a pretty straight forward project — relatively speaking. That work is a useful tool to address the more complicated social ills that gentrification creates. So, while NBA’s most obvious project is combatting food insecurity, getting new, wealthy neighbors to work in common cause with the less fortunate, neighbors who have grown up, and in many cases grown old, in the neighborhood is the core mission.

What distinguishes NBA's operation from traditional soup kitchens and food pantries is their truck. The Angelmobile is a curbside custom-made Ford 350 with a 36-feet-long, nearly nine-feet-wide and 12-feet-long kitchen kitted-out with food storage units and a heated and refrigerated service counter. Because the core of the Angelmobile's day-to-day volunteer staff draws from the different churches it parks in front of; the vibe is more block party than crisis intervention.

“Typically, a soup kitchen tends to be hidden in church and synagog basements. If you’re a new neighbor and you see it at all, you walk past a line of people outside that place, and you’d be tempted to say ‘oh, that’s what they do.’ You might say, ‘That’s their job feeding those people.’ The truck changes that dynamic.” Says NBA co-founder John Merz, Minister of The Episcopal Church of the Ascension in Greenpoint. “Now you’re thinking, ‘That truck on the street feeds people. Who are these people? They seem nice, and they seem happy.’ That’s what The Angels are all about.”

That was exactly my experience on my first ride on the Angelmobile. I don’t know who I anticipated would be lined-up for lunch when the Angelmobile pulled up on Manhattan Avenue in Greenpoint. I am confident my expectations were informed by television dramas and lame local news, not an understanding of food insecurity in urban America in 2019. I expected to see vulnerable populations — and there were old folks. I expected to see men struggling with drug and or alcohol dependence. Those guys were there, but not in numbers. I did not expect to see two young women wearing CVS uniforms, or school kids out on summer break.

In 2019 charitable organizations are rethinking how to address the needs of the 40 million hungry people living in America. Critics tend to suck their teeth disapprovingly when food pantry and soup kitchen organizers declaim the daily crisis of feeding their clients — nearly 12 percent of all U.S. households.

Responding to persistent food insecurity in the most developed industrial country in the world has been a puzzle for a long time. The first permanent food stamp program was enacted in 1964 as part of President Lyndon B. Johnson’s War on Poverty, and people had been hungry in America for a lot longer than that. Critics ask, why do we continue to describe hunger as a crisis 55 years later? In addition to various — and variously effective — government assistance programs, thousands of charitable outfits and organizations feed millions of Americans every day. Surely, observers assert, we must all have missed a significant systemic cause of hunger in America if 5.8 million households still don’t have enough food. “There’s a traditional split between justice and charity in this business. We focus on neighbors helping neighbors,” says Merz. “When people to work with each other toward the same goal, everybody starts to understand the complexity of the place they live.”

And Merz and his partner, co-founder Neil Sheehan, believe their approach can serve as a national model for addressing food insecurity on the ground In the Angelmobile, adjacent to the kitchen, there’s an office that hosts a rotating crew of social service providers. “On days we go to neighborhoods with large new-immigrant populations we bring an immigration lawyer with us,” said Sheehan. “When we park outside a public housing project, we often have a housing expert onboard with us.”

When Sheehan and Merz talk about Angels, you’ll hear them use the phrase community cohesion as often as food insecurity. It’s the food — making it and then delivering — that serves the purpose of addressing one of urban America’s most nuanced and problematic dynamics. “The individuals on both sides of the gentrification cycle, the new, wealthy, often young, residents on one side and the long-time residents, have emotions about the social dynamic they have entered into,” says Sheehan. “The new folks know they’re part of a phenomenon that has casualties. They have guilt but don’t know how to address it. Old-timers are angry and scared that their time is running out. They experience cognitive dissonance. They see beautiful parks and businesses appearing, and they ask, ‘why now, not before?’ and ‘when will I get pushed out?’ One group benefits spiritually and emotionally and the other benefits concretely. The truck and the food is the locus of all this good stuff.”