As Showtime's drama about Roger Ailes' reign at Fox News wraps this week, let's pause to recognize her performance 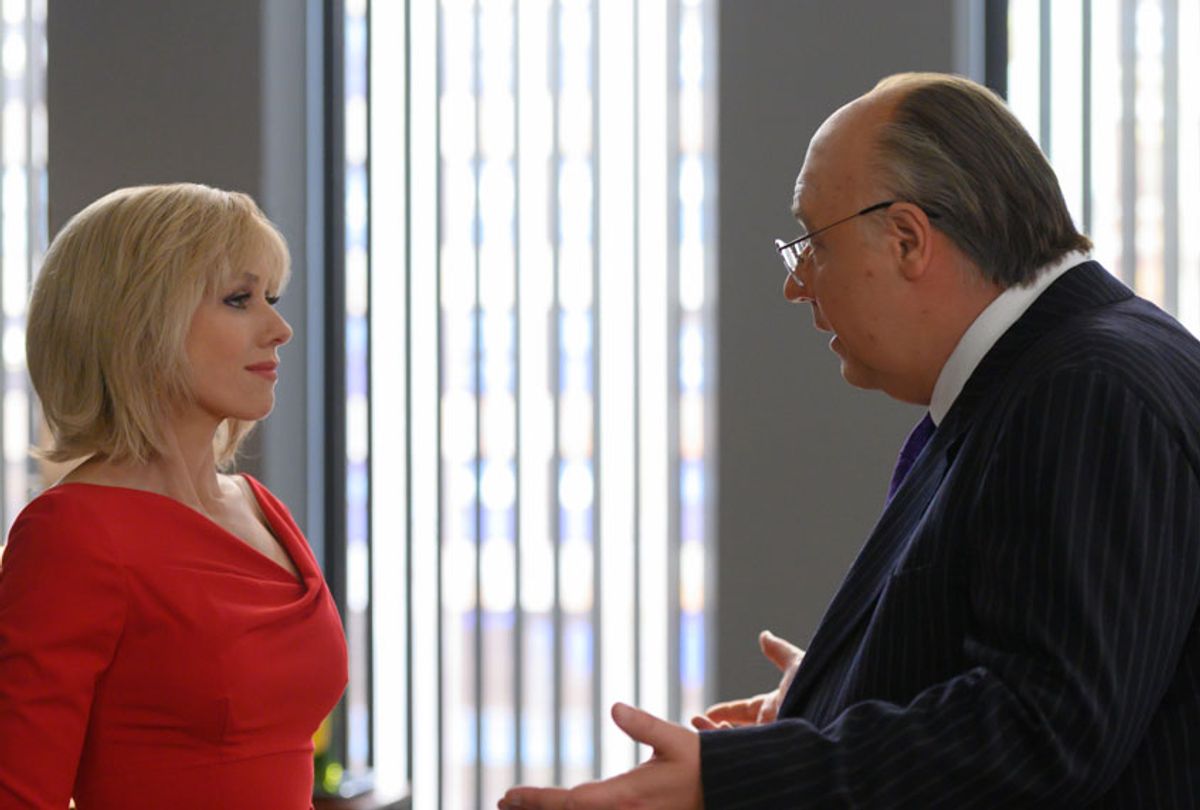 You could make a very good argument that the late Roger Ailes had more impact on this country than anyone else over the last quarter century, and Showtime’s "The Loudest Voice" makes that case quite convincingly. Nearly every moment of the seven-part series (which concludes this Sunday) is as intense and gravid with apprehension as each day’s breaking news. And with good reason: This is the show that shows you how things got this way.

By now everyone should know that "The Loudest Voice" is based on Gabriel Sherman’s 2014 book and Sherman’s subsequent reporting on Ailes and Fox News for New York magazine. Sherman must have gotten the story right because no one on either side of the political spectrum has refuted his book or the series.

Considering its inflammatory content, response to "The Loudest Voice" has been surprisingly muted. You might think that Sean Hannity and Tucker Carlson would have some kind of rant in defense of the man who made them famous, but perhaps Fox’s strategy is that not talking about the show will keep many of their viewers from discovering it.

The other side, by which I mean anyone who gets their news anywhere except Fox News, is also fairly ambivalent about "The Loudest Voice," particularly the reviewers who give such unqualified praise for the glut of fantasy, sci-fi and horror shows on TV.

Unfortunately, most critics have focused on the prosthetics that transformed Russell Crowe into a scary recreation of Ailes. Why, I wonder? When Alec Baldwin is made up like Donald Trump, we laugh and applaud and shake our heads at the uncanny resemblance; when Nicole Kidman’s nose and eyes are transformed into a likeness of Virginia Woolf, they give her an Oscar. It’s not likely that anyone will complain loudly about the scenes in "The Irishman" that show Robert DeNiro, Joe Pesci and Al Pacino as young men. Anyone OK with these tricks shouldn’t object to Crowe’s latex, especially when Crowe delivers such a piledriver performance.

More serious, though, is what I can only call critical reticence. Surfing through the reviews, I found several references to how "The Loudest Voice" was geared to “liberal audiences.” But why does anyone think that conservative-leaning or so-called independents wouldn’t benefit from seeing how Fox News was created and how Ailes helped put Donald Trump in the White House? Perhaps it’s assumed that anyone with a conservative leaning will simply refuse to watch. The puzzle is why so many liberals who wrote about "The Loudest Voice" were timid about their politics, as if that would compromise their aesthetic judgement.

Yet another critical complaint is that the series is “ … more intent on probing the political and sociological impact of Fox News than the furiously complicated psychology of the man who created it.” I agree, but I see that approach as a big plus. I’ve never seen evidence that Ailes’ psyche was especially complicated, and there’s nothing about him that would hold our interest except the impact of the monster he created in Fox News and the monster he helped put in the White House.

The aspect of Ailes’ story that dominates the final three episodes is the sexual politics. His wife (played by Sienna Miller) refuses to acknowledge her husband’s relentless degradation of the women working for him, even though she experienced it herself when she worked for him at CNBC. Miller’s best scene comes near the end of the final episode when, seated next to Crowe, Ailes’s lawyer calls to tell him that there are recordings of his harassment. Her denials evaporate and she sinks into a pit of despair, all the deeper because she had a hand in digging it.

The real triumph, though, is Naomi Watts as Gretchen Carlson. A former Miss America, Carlson was a fixture at Fox for eleven years, steeped in white girl privilege and no one’ s idea of a feminist heroine. Watts doesn’t play her as one. She makes only brief appearances in the first four episodes, but in the final three, having entered the story as if through a side door, she takes over the story.

Her suppressed anger over Ailes’s hand on her ass or “asking” for her to do a “Miss America twirl” is all the more powerful because we don’t sympathize with her, but we do come to empathize. And if we don’t feel elation at Carlson’s eventual overthrow of Ailes, we at least feel a sense of vindication.

It’s a pleasure to see Watts in a deep dish role in a mainstream production. She is one of the great film actors of this century, though she didn’t get her big break till 2001 when she was already 31. If David Lynch’s "Mulholland Drive" is the best film of the 21st century, so voted by a 2016 BBC poll, then much of the credit must go to Watts, whose performance — or rather, performances — as the naïve young actress Betty and the bitter, disillusioned Diane, gave the film a bedrock frame for Lynch’s Neo-Freudian, Quasi-Jungian dream logic.

Over the next 18 years she’s had only a handful of roles that stretch her limits like that, though as the outed CIA agent Valerie Plame in "Fair Game" and as Ann Darrow opposite the great Andy Serkis’s motion-captured ape in "King Kong," she’s had opportunity to shine.

She’s still a leading lady at age 50, and in Carlson’s emotional breakdown scenes isn’t afraid to let the camera come in close and see the lines on her face. She’s well matched against her old friend Russell Crowe and knows how to grab a scene by purring to his roar. In the end, the battle in "The Loudest Voice" is won by the actor with the softest and most nuanced voice.