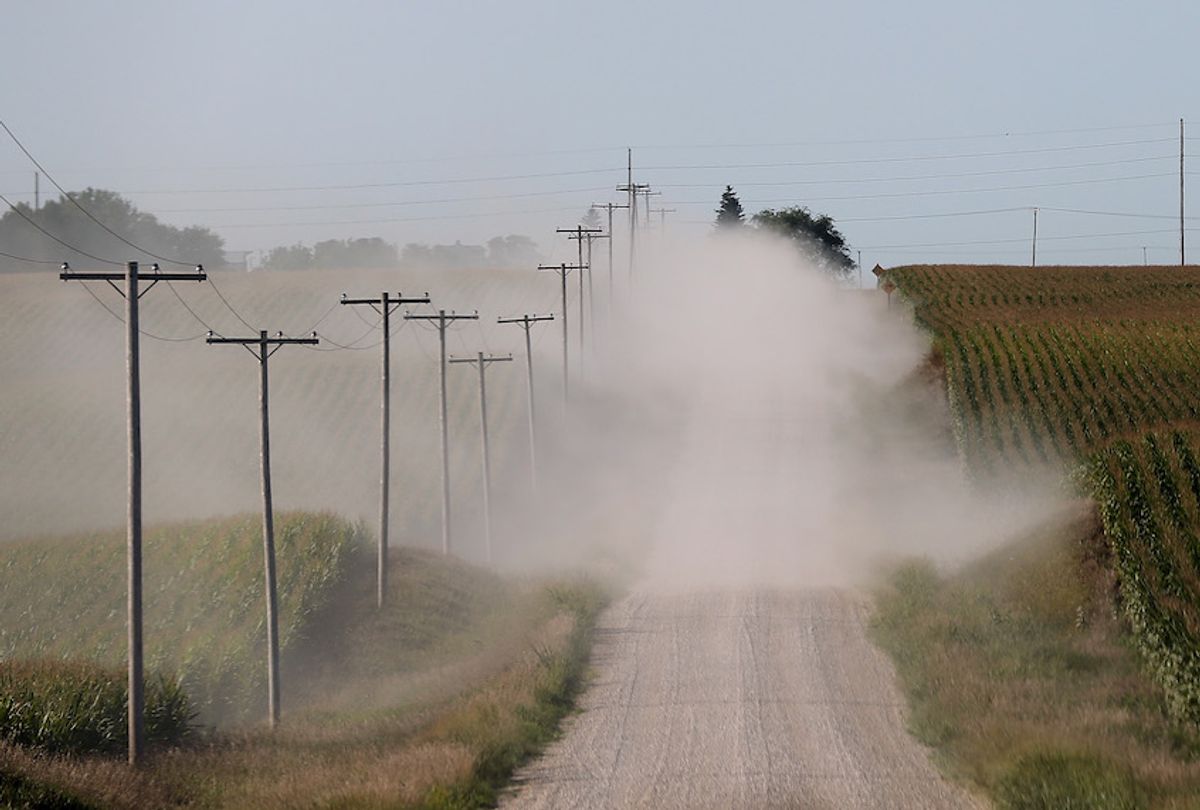 A car kicks up dust as it drives by corn fields on August 7, 2012 in State Center, Iowa. (Justin Sullivan/Getty Images)
--

The Intergovernmental Panel on Climate Change (IPCC) has released another report that spells out, in minute, devastating detail, what terrible shape Earth is in. Previously, they showed how human activities had wreaked havoc on the planet’s species diversity. This new report issued on August 8th reveals how land and water are being abused, making food systems increasingly precarious and increasing the spread of desert and non-arable land.

If you follow climate change news or have been outside recently, you can probably imagine a lot of what’s in the report. The rate of soil turning into desert is 10-100x faster than the formation of new soil. Land once suitable for agriculture is becoming sand. Precipitation all over the planet has increased, and extreme weather events have also increased over the past century in part because of this drying out. Unsurprisingly, this also feeds into increased risk of wildfires.

That’s just part of the first data chapter. There’s an introductory chapter, two more several-hundred-page-long data chapters, and a summary chapter, along with a summary for policymakers and...it goes on. Here’s another example of the not-looming-it’s-already-arrived crisis. More and more land has become subject to droughts, despite that increased global precipitation.

There are excellent summaries of the report in any number of outlets. Here’s a good one. The most interesting/terrifying part to me comes when discussing food price spikes. It discusses the interconnected-ness of global food supplies. When one important crop region experiences (what used to be) abnormal climate, like in 2012 when US corn growing regions went through a drought, the effect is felt worldwide in changes in food price and availability all over the planet. Shockingly, if you take past extreme weather conditions and model what would happen if they occurred today, the results are catastrophic. I’ll just quote (emphasis mine):

A study simulating analogous conditions to the Dustbowl drought in today’s agriculture suggests that Dust-Bowl-type droughts today would have unprecedented consequences, with yield losses about 50% larger than the severe drought of 2012 (Glotter and Elliott 2016). Damages at these extremes are highly sensitive to temperature, worsening by about 25% with each degree centigrade of warming. By mid-century, over 80% of summers are projected to have average temperatures that are likely to exceed the hottest summer in the Dustbowl years (1936) (Glotter and Elliott 2016).

We’re going to look back on the Dust Bowl as an enviable reverie of cool, damp weather.