Scaramucci escalates feud with Trump, warns GOP that Biden could win in 2020 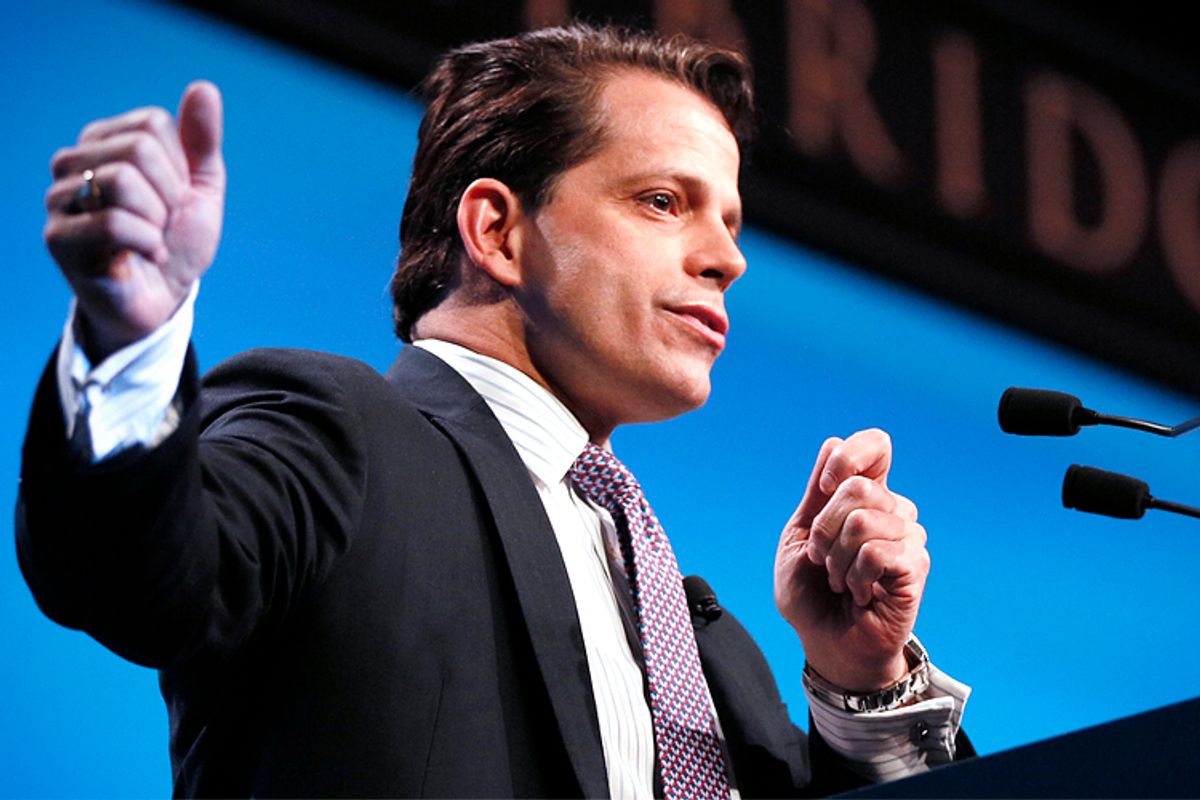 Anthony Scaramucci, the financier who lasted 11 days as the White House communications director before being fired, escalated his days-long public feud with President Donald Trump, urging the Republican Party to "call in a good relief pitcher" and replace Trump as the party's nominee in 2020.

Scaramucci, who was previously one of the president's most ardent defenders on cable news, labeled Trump as a "demagogue" and argued that his behavior is "getting worse and worse."

"I'm calling on my fellow Republicans. They know it's true," Scaramucci said of Trump's behavior in an interview Monday on MSNBC. "Do they have the courage to step forward in a block and knock this guy off?"

He then issued a stark warning for Republicans, arguing that if the Democratic Party "put up someone like Joe Biden, it's going to be very tough in Michigan and places like Pennsylvania."

Trump remains incredibly popular with GOP voters — 88 percent say he is doing a good job as president — while only 42 percent of all voters approve of his performance in office. So far, former Massachusetts Gov. Bill Weld is the only Republican to announce plans to challenge Trump in 2020.

Any challenger would likely face long odds in a primary bid against Trump. Still, Scaramucci, who has broken with his former boss in recent days, said Republicans cannot win with Trump on the ticket. He has gone on a media blitz in order to draw attention to the president's "increasingly divisive rhetoric," which he claims is damaging the "fabric of our society."

He has used a host of metaphors in recent days to discuss his desire to see Trump replaced on the GOP ticket, comparing the president to the Wicked Witch of the West in the classic children's novel "The Wizard of Oz" and the HBO docudrama "Chernobyl." He even used baseball to drive his message home, describing Trump as a "very tired pitcher that's now throwing balls over the backstop."

"We need a relief pitcher to come in that can speak to the American people about very similar policies with a different, more inclusive style," Scaramucci said Monday on MSNBC.

Until recently, Scaramucci had continued to express support for Trump, even though he increasingly spoke out on television and social media against some of the president's rhetoric on race and other issues.

Speaking about video in which the president touted his accomplishments and boasted about rally crowd sizes after visiting patients at an El Paso hospital, Scaramucci declared, "The facts are he did not do well on the trip."

"If the trip is being made about him and not the demonstration of compassion, and love, and caring and empathy for those people, then it becomes a catastrophe for him — the administration — and it's also a bad reflection on the country," he continued, theorizing: "Maybe he'll tweet something negative about somebody for saying he didn't do well."

That criticism was apparently what spurred Trump to lash out at his former aide on Twitter over the weekend, who he claimed "knows very little about me other than the fact that this Administration has probably done more than any other Administration in its first 2 1/2 years of existence."

Scaramucci told the Washington Post on Monday that he did not know if others would come forward to take on Trump, because they "don't want to be cyberbullied by the bully-in-chief."

"Once he lights you up on Twitter, you start getting death threats," he continued.

He also said he had called Trump several times in the past few months to give him some private advice.

"He didn't return my call," Scaramucci told the news outlet, adding that that was not the reason he was now urging the Republican Party to throw its support behind another candidate in 2020.

White House press secretary Stephanie Grisham told reporters Monday that she considers Scaramucci’s remarks about Trump "so self-serving on his part, and the media plays right into it."

"It's embarrassing to watch," she added.

Later on Monday, Trump took to Twitter to again assail his former staffer, arguing he had little influence and "just wanted to be on TV!"

"Also, I seldom had time to return his many calls to me," Trump claimed.

Scaramucci shot back with yet another baseball metaphor.

"You are losing your fastball— very weak troll. Bullying is the most anti-American thing in our culture and it is emanating from the Oval Office," he tweeted. "Many have called and are willing to work on a necessary replacement. Time to call in a good relief pitcher."