Julio Torres' HBO special "My Favorite Shapes" may be "too niche." You should watch it anyway 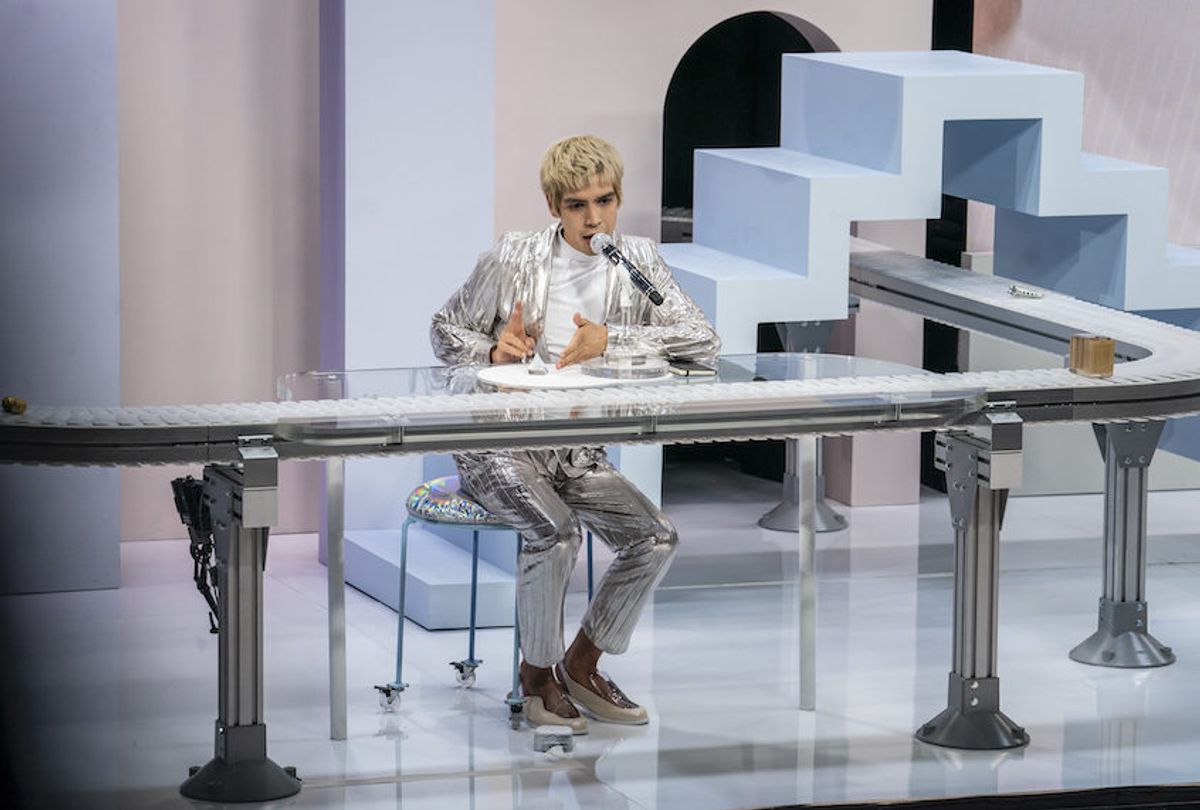 Julio Torres recalls the character of Monsignor Claude Frollo from the 1996 Disney animated film “The Hunchback of Notre Dame" as such:  a “withering, possibly-closeted, deeply-troubled little man.”

“And during the peak of his narrative arc, Monsignor Claude Frollo sings into the roaring flames of the fire about his lust for the gypsy girl Esmerelda,” Torres explains. “And in that moment, we see lust turn into misogyny, into essentially genocide.”

He pauses, collecting an item from the industrial conveyor belt that wraps the stage.

“Anyway, that was a Happy Meal toy,” Torres said, displaying a small plastic figurine of Frollo to the crowd — some kids had Ninja Turtles, some had Transformers and some child out there had a morally bankrupt 1482 French religious leader as a plaything.

Torres, dressed in a silver metallic space suit with a swipe of glitter on each cheek, puts the Happy Meal toy back on the conveyor belt and summons the next item. This is the structure of his first HBO comedy special, “My Favorite Shapes.”

For an hour, Torres essentially engages in adult show-and-tell. There’s no explanation for why other than, “I have a lot of shapes, but not a lot of time, so we have to start immediately,” and that’s frankly enough to establish the special’s framework. Torres is there to explore the who behind the what — the stories and personalities inherent to each of his chosen shapes.

The format feels just familiar enough to register as a comedy special, as Torres includes some of the standard tentpoles of a stand-up set; but you quickly realize these are carefully implemented to subvert audience expectations. For example, at the midpoint of “My Favorite Shapes,” Torres pauses for a series of impressions, a standard comedic breather.

“Do not rush me! The water will be ready when it’s ready,” Torres says in a deep voice, stalling for a moment before revealing: “That is a Brita filter.”

The next impression is the “nasty little curtain” on an airplane that divides first-class from coach, who probably wanted to work in theater, “but things don’t always work out.”

It’s this attention to meticulous detail, combined with comments that are just the tiniest bit off — “My favorite color is clear!” — that give the impression that in watching Torres, you’re watching something otherworldly. This is something the comedian leans into, for what it’s worth; his Instagram handle is @spaceprincejulio.

Throughout the special, you see references to Torres’ past and current work. He writes and co-stars in “Los Espookys,” with his collaborator and co-star Ana Fabrega. The surreal Spanish-language series, also on HBO, follows a group of young adults in an unnamed Latin American city as for-hire haunters, staging elaborate fake alien invasions and exorcisms for a price. In “My Favorite Shapes,” Torres again hints at his fascination with the supernatural; he describes a process that he deemed “transference,” where as a child he would take the soul of an old, damaged toy and transfer it to a new replacement toy.

Torres is also the voice behind some particularly memorable "Saturday Night Live" sketches, like the 2017 Ryan Gosling sketch “Papyrus,” about a man who is deeply, obsessively bothered by the fact that “Avatar,” the biggest blockbuster of all-time, seemingly used the default font Papyrus for its logo.

Torres observes things that escape the notice of most people, resulting in moments — like "Papyrus," which enjoyed viral fame — that audiences can’t forget.

An example from “My Favorite Shapes” is when Torres notes there are no scenes in the original “Flintstones” series in which Fred Flintstone and Betty Rubble were left alone to navigate conversation without their respective partners; Torres ponders how that would end, using shapes as stand-ins for the characters.

In many ways, “My Favorite Shapes” echoes “Standup for Drummers,” a Netflix special by Fred Armisen, who also co-produces “My Favorite Shapes” and “Los Espookys” — it’s definitely bizarre and a little abstract, to the point where there are moments you may wonder if you’re the intended audience. To be honest, you might not be.

In a New York Times review of “Standup for Drummers,” critic Jason Zinoman pointed out that it was a special by a drummer performed in front of an audience purposely stocked with drummers.

“There’s an old-school belief that great comedy should work for all audiences. It’s never been entirely true,” Zinoman wrote. “Taste varies wildly, and some of the best comedy, like the finest film or theater or art, can be obscure, esoteric or simply too odd, dirty or absurd to attract the biggest crowds.”

This is something Torres obviously both anticipates and embraces in “My Favorite Shapes.” Toward the end of the special, as he balances a delicate pink crystal between the thumb and forefinger of one hand,  and palms a miniature leather chair in his other, he looks up at the crowd and says, “I’ve often been called ‘too niche.’” He then puts the crystal in the chair, and coyly adds: “To which I’ll say, I have no idea what you could possibly be talking about.”