Notes on cocktail camp: From tiki to the boozy juice box, a celebration of the unstuffy drink

American cocktail culture is being camped — and I love it 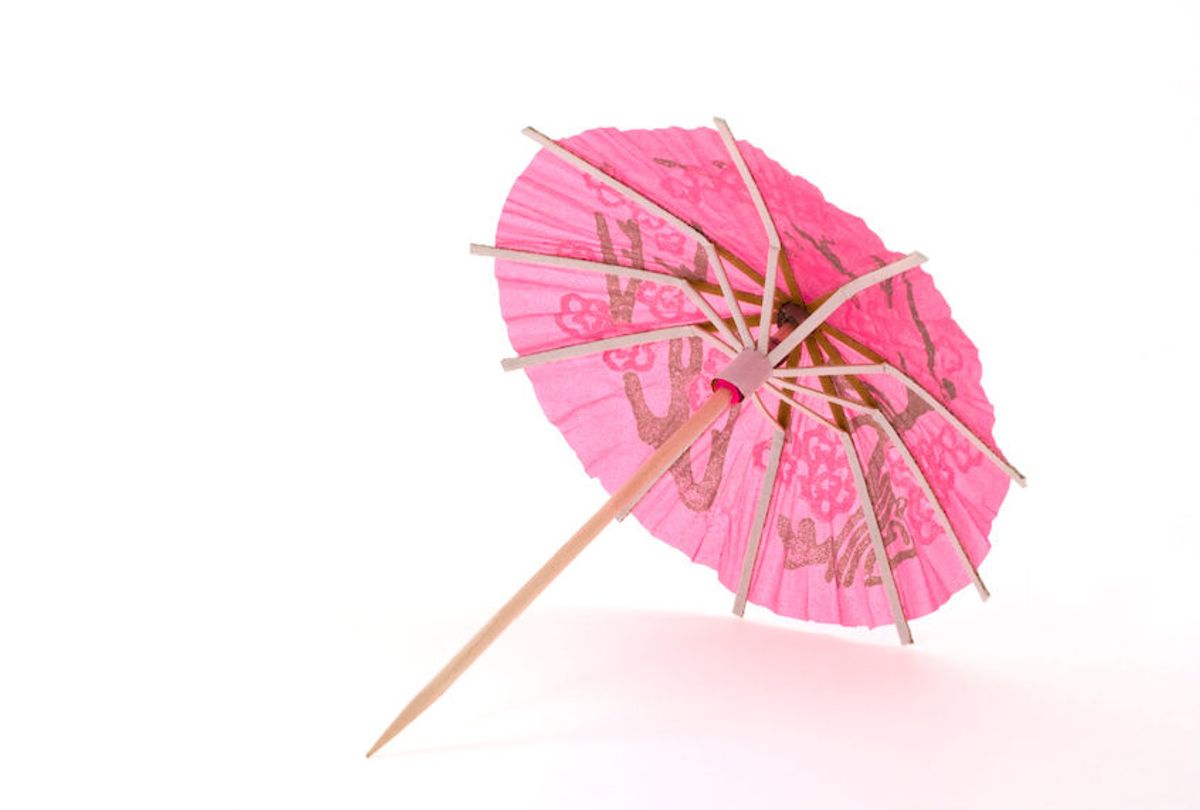 In May, New York City’s Junzi Kitchen began advertising juicebox cocktails, a nod to innocence paired with a knowing adult wink. They look like the Juicy Juices that are passed out during kindergarten snack time, except Junzi Kitchen’s version are built from imported Vitasoy boxed juices with minibar-size bottles of booze sticking out of the top next to the slot for the little plastic straw.

Likewise, last summer, spiked Capri Sun knock-offs were big — boozy, colorful and served in clear plastic drink pouches (which I was delighted to find can be bought in bulk). I’ve also seen cocktails served in those plastic bears that are typically filled with honey; nowadays a drink can come from almost any container, from lab beakers to the mouth of a ceramic shark.

Currently, we’re in the midst of a marked resurgence of drinks so emblematic of over-saturated Americana that to some they verge on the cringeworthy or, as cocktail writer Sarah Baird wrote in 2015, are “an exaggeration of bad taste” like mai tais, piña coladas, or “a beer boot cocktail that slushes together mezcal, gin and an upturned pony of Miller High Life.”

While many have referred to these sorts of cocktails as kitschy, I would argue rather that American cocktail culture has been camped, and I’m here for it.

For me, it all goes back to the tiki cocktail. I fell in love with them — the kind served in exaggeratedly curvaceous glasses, topped with delicate paper umbrellas — during a winter in bourbon country. “I’ll have the daiquiri,” I’d say, closing slim cocktail menus at bars all across Louisville, Kentucky, glancing down the line of bar stools where men in blazers nursed Old Fashioneds.

It was December 2016, a season of personal discontent; the weather as icy as the current political reality and the fall-out from my long-term relationship. These absurd drinks were a ray of sunshine.

As I tried bar after bar, I found a home that winter at a now-shuttered place called The Red Herring. Their drinks list was absurdly comprehensive, advertising 100 classic cocktails — a term more often applied to a Manhattan than a mai tai.

“90 percent of craft cocktail bars, or cocktail bars in general, they might not even have a blender in-house,” I remember beverage director Clay Livingston telling me at the time.

The Red Herring had two, and with them they’d make the perfect daiquiri — both the frozen slushie version that most of us think of when we see the item on a menu, and a classic version served on the rocks in a V-shaped cocktail glass. Both incorporated top-shelf rum, fresh lime juice and simple syrup. Big Bucket strawberry drink mix wasn’t on the menu.

Tiki cocktails have a long history in this country, dating back to the 1930s before going decidedly out of fashion in the early '60s. For many years after, “serious drinkers” — the craft beer connoisseurs, oenophiles and cocktail purists — wouldn’t be caught dead with a paper umbrella in hand.

But slowly over the last decade, American cocktail bars have returned tiki drinks to their menus, while dedicated tiki bars, with hula skirt-clad tables and surf-rock soundtracks, are popping up at a consistent rate. There’s probably one in your city now.

While the art world is typically the place where you’ll find the definitions of “kitsch” and “camp” debated with serious academic underpinning, the world of food and beverage is arguably equally stratified. It’s a space wherein most people have opinions about what qualifies as high and low culture, and how.

In the U.S., many of these distinctions are arbitrary, snobbish and prioritize the cuisine and beverages of certain countries and populations over others, while some center on the quality of ingredients — a filet versus an Arby’s Meat Mountain sandwich, for example.

And for years, tiki cocktails — which, as spirits writer Robert Simonson wrote for Punch, were, “not too long ago, a comic-pathetic relic of 20th-century drinking history” — fell into low-class territory due to their “unabashed kitsch.”

Kitsch is one of those terms that, despite having an abstruse definition, has been applied liberally, often damningly, by aesthetic theorists and critics throughout art history. Initially, it was a German word that originated in Munich about 150 years ago, where it was used to describe mass-produced artworks that could be sold for small amounts of money; think proto-Thomas Kinkades.

The term soon became linked with an emerging European middle class, and, in the eyes of the artistic Who’s Who, its celebration of mediocrity.

Eventually, “kitsch” made its way into the American lexicon and, while it’s still used in an academic context, most people probably associate it more with beachy souvenirs, their grandmother’s Precious Moments collection and maybe Jeff Koons sculptures, rather than a term that denotes an abject moral failing on the part of the average consumer.

In 1934, Don The Beachcomber, a Polynesian-themed bar and restaurant, opened in Hollywood. Its tropical concoctions, the first to mix flavored syrups and fresh fruit juices with rum (initially called “Rhum Rhapsodies”), were served in tiki sculpture-shaped mugs, topped off with maraschino cherries, palm tree drink stirrers and little neon umbrellas.

They were a fantasy amalgamation of Hawaiian, Asian, and Polynesian influences, with a distinctly American twist: bright, fruity and considered exotic by the movie stars of the '30s and '40s.

After World War 2, servicemen returned from the South Pacific with stories of their travels and the craze picked up in earnest. The economy was booming, long-distance travel became a real possibility for many American families, and pop culture turned tropical with “South Pacific” on Broadway and Elvis Presley starring in “Blue Hawaii.” Thatch roofs abounded as the tiki craze spread from coast to coast, and at the time, it was considered apart of a haute dining experience.

But in the '60s, the fad slowly began to fade and before long, bartenders folded up the tiny paper umbrellas in favor of the cream-heavy drinks (hello, Brandy Alexander) that became the barroom darlings of the '70s. Tiki didn’t age well, and any remnants of its glory days were merely saccharine simulacra of the original movement. In an ironic if late blow, in 1998 even Donald Trump closed a remaining Trader Vic’s location at his Plaza Hotel in New York, declaring that it had “gotten tacky.”

Dani DeLuna is a California-born, New York City-based cocktail writer and rum enthusiast. She and I first spoke about the reemergence of tiki drinks in 2017.

She said the phenomenon could be attributed to a number of factors. There’s the renewed and ongoing “it-spirit” status of rum, as well as an increase in bi-coastal bartenders who travel between New York and California, a state where, DeLuna says, “tiki never actually died.”

There’s also something that is difficult to quantify; it’s like a collective desire for escapism, which was what drew me to tiki drinks in the first place.

“Several years ago, I started something called ‘Tiki the Snow Away’ on my blog,” DeLuna said. “It was a direct response to December. It happens in January, an entire month of tiki in the dead of winter, because December so intense for drinking with eggnogs and where everything is stirred.”

She continued: “And I was kind of like, ‘I want a f**kng daiquiri’ and then it turned into ‘Oh, actually I want a whole month of tiki.’”

Whether from cold winters or disheartening politics, the idea of escape is the key to tiki drinks’ transition from kitsch to camp. Kitsch is static — it’s a description of an object or an item — where camp is performative, and you’re in on the joke.

In Susan Sontag’s “Notes on ‘Camp,’” she says it’s all about artifice and exaggeration, living life in quotation marks. “It’s good because it is awful,” she writes, and it’s actively poking a little fun at the status quo. That was the idea when "Camp" was announced as the theme of the 2019 Met Gala, and commentators from both the art and fashion worlds sprung forward to explain the difficult-to-define concept. The New York Times published, by way of explanation, a long list of campy things: dog shows, Cher, John Waters, "Strangers with Candy." When bartenders break out the blenders and hunks of pineapple, they know exactly what they are doing: they’re serving up “Rocky Horror Picture Show” or Liberace in a hurricane glass.

Part of this is simply that enough time has passed between the original advent of tiki — and even some of the less successful, perhaps even tacky, reimaginations — and now. “Things are campy,” Sontag wrote, “not when they become old — but when we become less involved in them, and can enjoy, instead of be frustrated by, the failure of the attempt.”

But a bigger part of this is tied to an active industry movement that is slowly “taking the snobbery out of current cocktail culture.”

“After we went through the craft cocktail movement to regain the classics, there was a pretty stuffy period, especially for New York,” DeLuna said. “So, I think something about it was like, ‘Oh, this needs to feel a little bit more like vacation. This needs to feel a bit more like escapism, rather than feeling like the bartender thinks I’m a piece of s**t.’”

In the 2015 Punch article, “A New Wave of Ironic Cocktails,” Sarah Baird wrote that “low-brow is the new brow... from slushies to test-tube shooters to once-banished ‘70s drinks, a number of craft bars are creating a whole new canon of ironic cocktails, many of which recall a simpler time in our boozing lives.”

Some of the campiest cocktail experiences are ephemeral: the frozen Eleven's Eggos, garnished with a waffle wedge at Chicago's Emporium-hosted 2017 "Stranger Things" pop-up bar The Upside Down; in L.A. at the "Saved By the Bell" pop-up eatery Saved By the Max, fans could order the I'm So Scared, a cold brew and cognac brunch cocktail inspired by Jessie Spano's now-iconic, unintentionally hilarious caffeine pill-fueled breakdown.

Sontag described camp as the “metaphor of life as theater,” and when applied to cocktails, the bar is the stage and your mai tai or juicebox cocktail, curly straw and all, is Bette Midler. Over-the-top, infused with artifice and bawdy humor, and, ultimately, a legacy that just won’t quit. And when you’re feeling the need for an escape — from politics, from a lackluster job, from just your average life — who else would you want to drink with?