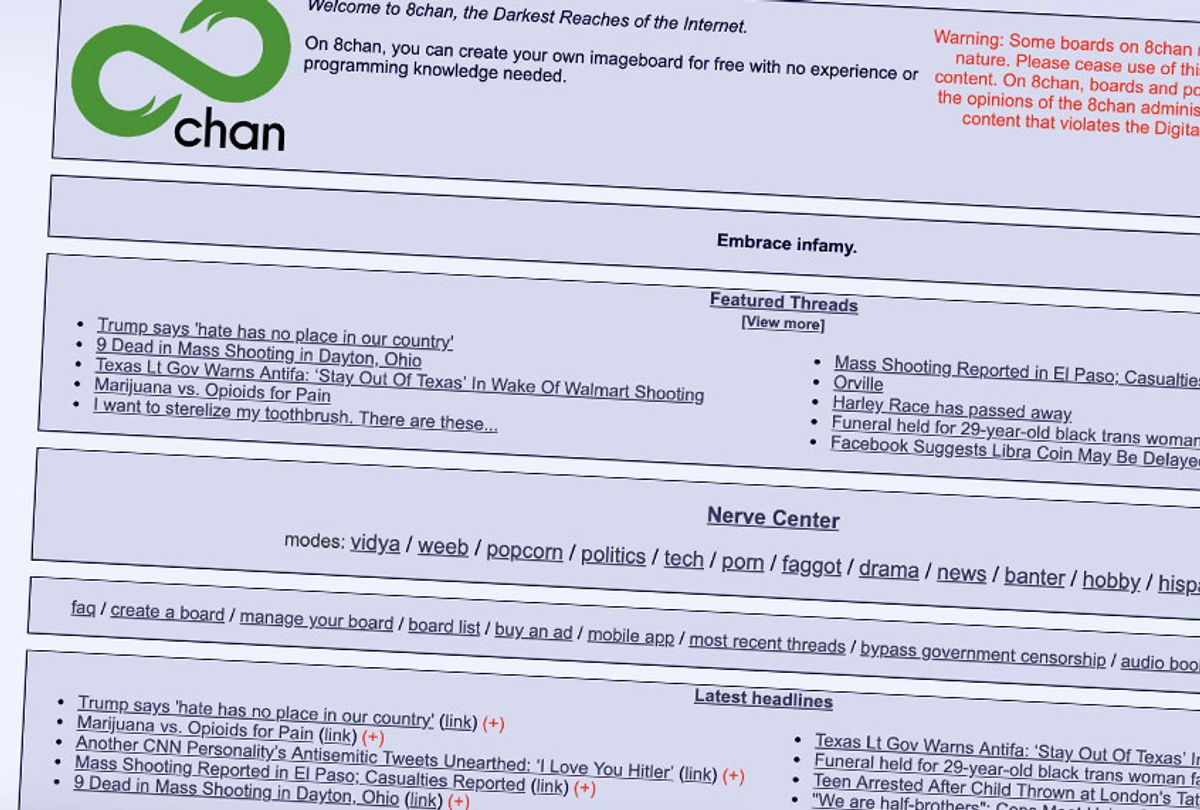 The House Homeland Security Committee issued a subpoena Wednesday to the owner of 8chan, the online message board which has been linked to three mass shootings this year.

8chan and other fringe online forums have come under mounting scrutiny from lawmakers across the political spectrum in recent months after their websites were linked to a host of violent attacks allegedly carried out by white supremacists and extremists.

The gunman accused of the shooting massacre that left 22 people dead and injured dozens of others in an El Paso, Texas, Walmart on Aug. 3 allegedly posted a racist screed decrying a "Hispanic invasion of Texas" to 8chan before the attack.

The mosque killings in Christchurch, New Zealand, and the synagogue shooting in Poway, California, were also announced in advance on the website.

"At least three acts of deadly white supremacist extremist violence have been linked to 8chan in the last six months," Thompson and Rogers said in a statement. "We have questions on what is being done to counter this trend so we can be sure it is being properly addressed. Receiving testimony from Mr. Watkins is critical to our oversight on this matter."

The subpoena demands that Watkins appear before the panel on Sept. 5. Watkins, who has owned 8chan since 2015, said in a video posted to YouTube earlier this week that he is in Reno, Nevada, and plans to speak to the committee.

8chan has been offline in recent days after a crucial network of web infrastructure services cut ties with the company over its ties to extremism. Watkins said the website will be back up after he speaks to the congressional panel, and they "understand that we have nothing to do with this crazy violence that's been happening."

"It's a shame I'm being blamed for this," he said. "It's obviously a smear by the press if a week after the websites have been turned off, they're still saying that two hours before they posted on my website. It didn't happen, and still a bunch of people got hurt. And I'm so sorry about that."

Watkins said he wants Thompson to know "I'm with him and support him 100 percent and that communications between internet companies and different branches of the government is a key to helping this kind of thing."

In the wake of the El Paso shooting, 8chan's founder, Frederick Brennan, was among those who called for the website to be shut down. Brennan founded 8chan in 2013, but he stopped working with its owners in December.

"It's not doing the world any good. It's a complete negative to everybody, except the users that are there," Brennan said. "And you know what? It's a negative to them, too. They just don't realize it."

"Shut the site down," he said.