Into the weeds of Roundup: Monsanto and the public's right to know 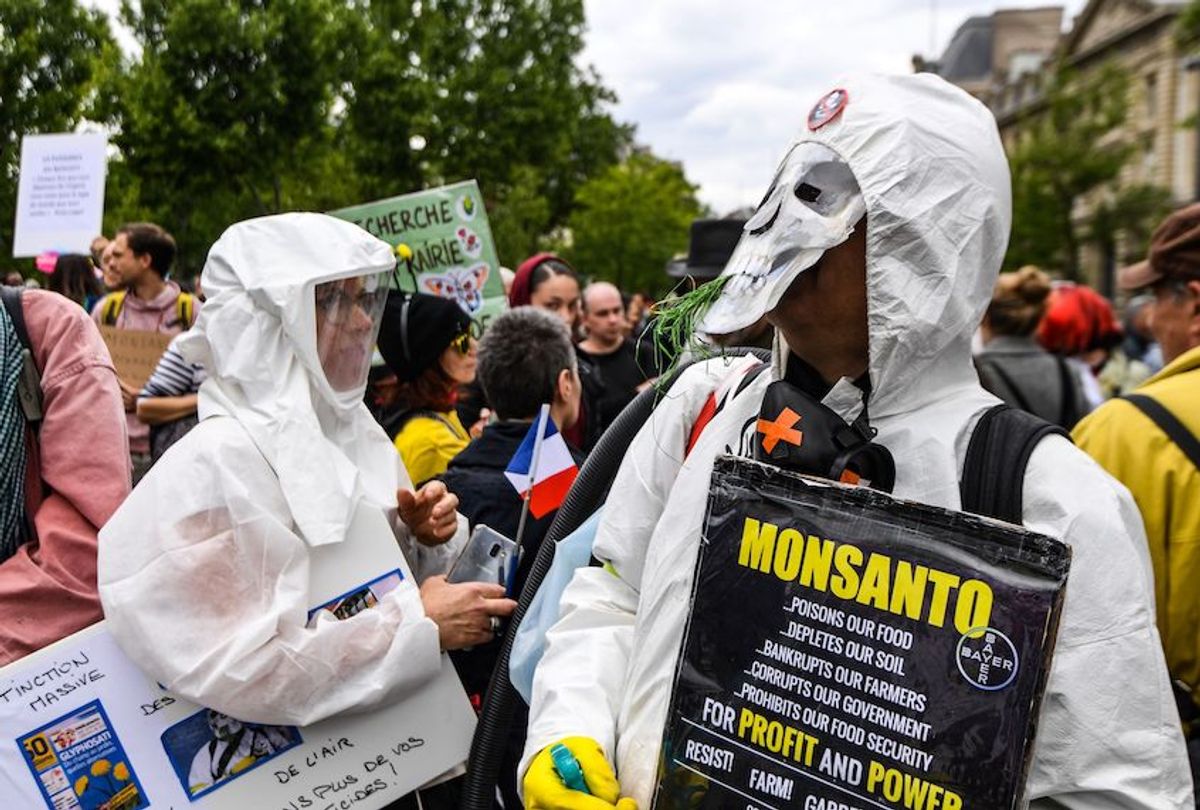 People gather at the Place de la Republique square in Paris on May 18, 2019 to take part in a march as part of a worlwide call to demonstrate against Monsanto and other agri-business giants. (Photo by Alain JOCARD / AFP) (Photo credit should read ALAIN JOCARD/AFP/Getty Images) (Alain Jocard/AFP/Getty Images)
--

What do Sense About Science, the Science Media Center, the Center for Food Integrity and the International Food Information Council have in common?

They were all groups paid by Monsanto to undermine investigations into the safety of its pesticides. And they are all groups the public looks to for honest answers.

The same holds true for public university professors and scientists, who tend to be well respected, are viewed as persons of authority, and are trusted for their views. But when faced with requests to release internal communications between Monsanto and public universities, the St. Louis–based chemical manufacturer sought to counter the investigation with 11 Monsanto employees, three industry staffers, two PR firms, and by turning to academia.

A new report suggests that, after a Freedom of Information Act (FOIA) request for their internal documents from different universities was filed, the company worked with these universities and the scientific community in an effort to control its public relations message.

The internal documents obtained from Monsanto, an American agrochemical and agricultural biotechnology corporation that was recently purchased by Bayer, show that the company designed a campaign to counter the investigation into its ties with public university professors.

Gary Ruskin, the co-founder and co-director of US Right To Know (USRTK), a nonprofit that investigates the food industry, said the documents released this month show that Monsanto has recruited taxpayer-funded universities to do its bidding since 2015.

The company, which produces Roundup, a glyphosate-based herbicide, has been dealing with more than 18,400 Roundup lawsuits in recent years. One involved a jury award of $78.5 million in compensatory and punitive damages. The jury in that case had originally awarded $289 million to groundskeeper DeWayne Johnson after finding that Monsanto had purposely ignored warnings and evidence that Roundup causes cancer, including Johnson’s lymphoma. That amount was later reduced by San Francisco Superior Court Judge Suzanne Bolanos.

A lot to hide

Ruskin told WhoWhatWhy the records show that Monsanto fought to keep the documents from being released, and acted “like it has an awful lot to hide. Whenever scientists, journalists and others raise questions about their business, they attack. We are just the latest example. This has been going on for years.”

Ruskin said their own investigation uncovered secretive industry collaborations between Monsanto and academics, with the apparent goal of adding respectability to their ongoing work.

As the report noted, the documents that were uncovered “provide a rare look into the public relations machinery at Monsanto, and how it tried to contain an investigation into its relationships with academics and third parties who have promoted the company’s agenda.”

And part of that concern was that the FOIAs would reveal details about Monsanto’s influence in the regulatory and policy process. That included payments to academics and their universities, as well as collaborations with academics in support of industry public relations goals — a move to protect the company’s reputation and to “‘position’ the investigation as ‘an attack on scientific integrity and academic freedom,’” the report notes.

“We found a very large web of ties between Monsanto and the agri-chemical industry. And professors in the US and elsewhere became front groups, flacking for Monsanto’s business and its products,” Ruskin said. “Monsanto has been extremely effective at harnessing third parties to speak for it. They’ve created a megaphone for themselves that looks independent, but it’s not.”

USRTK just released the internal Monsanto documents detailing the company’s efforts to counter their Freedom of Information Act requests into the chemical manufacturer’s business ties with public university professors. Starting in 2015, USRTK made numerous public records requests to taxpayer-funded universities, which led to the release of emails detailing secretive industry collaborations with academics.

Many of the documents were also made available through the legal discovery that’s been part of the Roundup cancer litigation — lawsuits that claim the weed killer causes several types of cancer, including non-Hodgkin’s lymphoma, b-cell lymphoma, and leukemia.

For example, a company memo that USRTK uncovered that was marked confidential read, “Any situation related to this issue has the potential to be extremely damaging, regardless of how benign the information seems.”

Monsanto has not yet issued a statement on its website about the USRTK release, or responded to questions sent by WhoWhatWhy.

USRTK found through its Freedom of Information Act requests that Monsanto had made frequent references to using third parties to counteract their investigation. That included Sense About Science, the Science Media Center, the Center for Food Integrity, and the International Food Information Council.

Ruskin said the FOIA documents also uncovered the company’s influence in the regulatory and policy process, which included payments to academics and their universities, and collaborations with academics in support of their public relations goals. In one instance, their investigation found that a University of Illinois professor had been given $57,000 from Monsanto to write and speak about genetically modified organisms as well as related travel. That work also included lobbying the federal government to stop investigations of Monsanto’s GMO products.

Monsanto, he said, wanted to protect its reputation throughout this process.

“But at the same time, the use of third parties and third party networks and organizations, it is tremendously effective, and that’s why Monsanto does it and why Bayer does it.”

Larger health implications of this release

But why is this important for the public to know? The biggest question, Ruskin said, is whether Monsanto is piggybacking on the credibility of public universities to divert attention from health concerns raised about their products, such as the Roundup lawsuits.

“The most important health issue that has come out relates to the pesticides,” he said. “There’s been a lot of discovery about the trials that have happened in the last year, and that’s by far the most significant health issue being debated. Even before then, there’s been quite a debate throughout the world about the safety of this product.”

Earlier this month, Bayer offered an $8 billion deal to settle the 18,000 claims against the weedkiller Roundup.

Who is doing the investigating?

Another key issue, Ruskin said, is the methods used by companies to deceive the public about any health risks related to their products.

Also, he said, the public should be worried about the lack of investigative journalists working to uncover what large companies may be hiding from the public.

“Given the decline in investigative journalism focused on food, I figured it would be worth trying to do some investigating on our part and see what we can find, and we found so much so quickly. The rest speaks for itself,” he said.

“It’s the collapse of a major institution (journalism) on which our democracy rests,” Ruskin added. “The reason why our food system isn’t working for us points to a systemic failure of our politics and our journalism.”