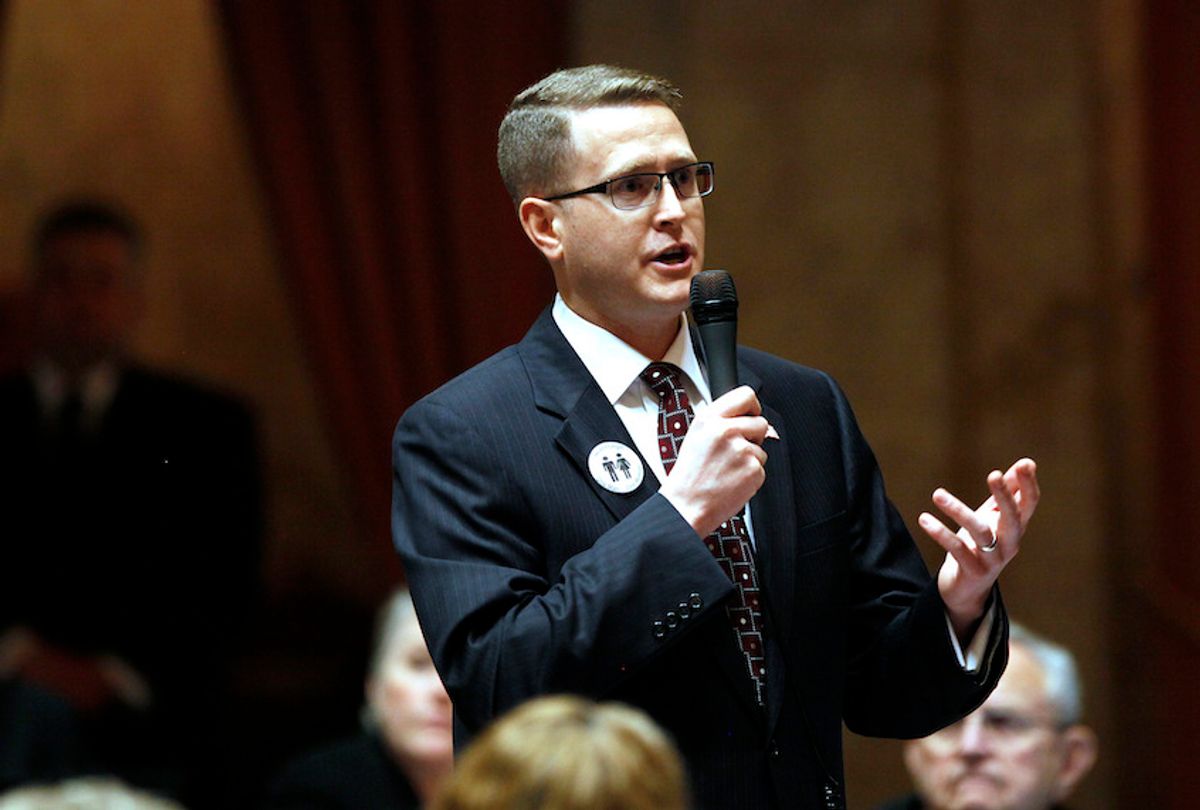 In Washington State’s legislature, Rep. Matt Shea is controversial even among fellow Republicans: he has distributed white supremacist Christian Identity literature and openly advocated violence against Muslims, gays and others he considers enemies of the United States. And according to a report by Jason Wilson for the Guardian, Shea has enthusiastically encouraged an extremist group called Team Rugged.

E-mails obtained by the Guardian show that Shea was in close contact with Team Rugged in 2016. Team Rugged, Wilson reports, offered training in “biblical warfare” to young Christian fundamentalist men — and that training included advice on ways in which guns and knives could be used on enemies. Shea, according to Wilson, made videos on behalf of the group.

The e-mails, Wilson reports, began in July 2016, when Shea corresponded with Team Rugged’s Patrick Caughran. In one of the e-mails, Team Rugged is described as a way “to provide patriotic and biblical training on war for young men.” Caughran said of Team Rugged, “Everything about it is both politically incorrect and what would be considered shocking truth to most modern Christians.”

In the e-mails, Caughran sounds a lot like a member of al-Qaeda, ISIS (Islamic State, Iraq and Syria) or Boko Haram — only instead of  promoting a violent Islamist jihad, he is promoting armed training and holy war for fundamentalist Christians. And one person who is cited as an inspiration in the e-mails is the Georgia-based Rev. John Weaver, a neo-Confederate extremist who the Southern Poverty Law Center (SPLC) has described as a “leading proponent” of “training Christians for armed battle.”

Weaver, according to the SPLC, has given weapons training to the League of the South — a neo-Confederate group that marched with neo-Nazis and white supremacists in the Unite the Right rally in Charlottesville, Virginia in August 2017.

Caughran, in the e-mail communications with Shea, explained that Team Rugged’s training would show young Christian fundamentalist men “how to work better as a team, both in achieving physically demanding tasks and on the battlefield.” Training, Caughran explained, would include “combatives, the use of a knife in defense, close quarters shooting with rifle and pistol and how to work effectively in teams of two, three and four.”

Caughran, according to Wilson’s report, asked Shea to promote its activities on Facebook. And in a 2017 video posted on his Facebook page, Shea interviewed members of Team Rugged and described the group as “returning to basic patriot principles.”

In 2018, Wilson notes, Shea sparked a major controversy in Washington State when he distributed a Christian Identity white supremacist document called “Biblical Basis for War” — which calls for Christian fundamentalist holy war and advocates the killing of all males who support abortion or same-sex marriage.

One of the Washington State Republicans who has been a vehement critic of Shea is Spokane County Sheriff Ozzie Knezovich. In an interview with the Guardian, Knezovich asserted that the militaristic armed training Shea favors for young Christian fundamentalists “almost sounds like going back to the Hitler Youth concept.”

Knezovich told the Guardian, “There are lines that should never crossed. When you indoctrinate children in radicalized hate, then we wonder why we have the kind of shootings and bombings that we have around the world.”