progressive politicians, groups, and commentators joined together to condemn the decision. 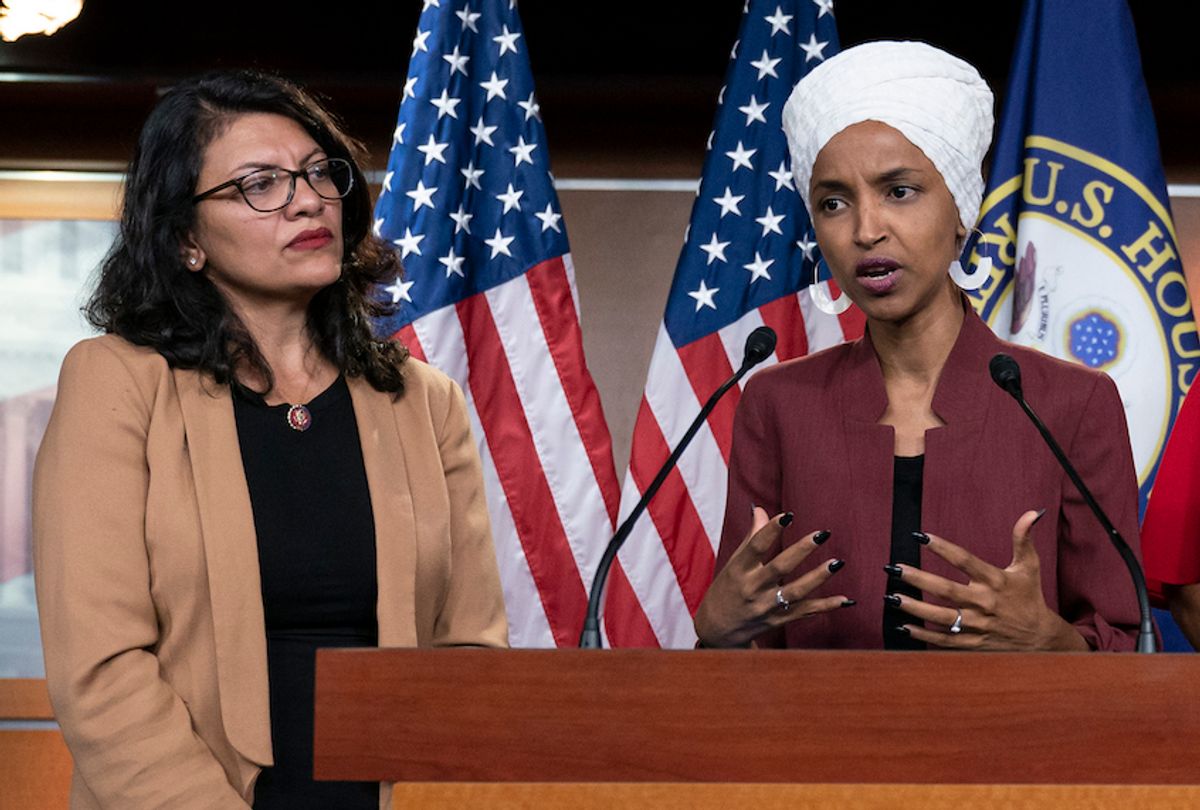 Anger over Israel's barring of Reps. Rashida Tlaib and Ilhan Omar from the country dominated the news on Thursday as progressive politicians, groups, and commentators joined together to condemn the decision.

Omar, a Democrat of Minnesota, and Tlaib, a Democrat from Michigan, have each seen their profiles raise alongside controversies over their critiques of Israel and the U.S. and how the two countries pursue imperialist policies.

"It is an affront that Israeli Prime Minister Netanyahu, under pressure from President Trump, would deny entry to representatives of the U.S. government," Omar said in a tweet announcing her statement on the decision.

Tlaib, who is of Palestinian descent and still has family living in the Occupied West Bank, planned to lead a congressional delegation into the territories controlled by the Israeli military this Saturday to show lawmakers the human cost of funding the ongoing occupation.

But the right-wing government of Prime Minister Benjamin Netanyahu blocked that trip, and any others that the two would like to make, with Thursday's decision. In a tweet featuring a photo of her grandmother, Talib explained what that ruling means for her family.

"This woman right here is my sity," tweeted Tlaib. "She deserves to live in peace and with human dignity. I am who I am because of her."

"The decision by Israel to bar her granddaughter, a U.S. Congresswoman, is a sign of weakness," Tlaib continued, "because the truth of what is happening to Palestinians is frightening."

One of the stated reasons for the ban is Tlaib and Omar's support for the nonviolent resistance movement known as BDS — Boycott, Divestment, and Sanctions — that aims to target the Israeli state for its repressive policies through tactics that worked against apartheid South Africa.

The BDS movement responded to the Israeli decision on Thursday with a statement that condemned "the far-right Israeli government's McCarthyite decision to prevent Congresswomen Tlaib and Omar from visiting the Occupied Palestinian Territory over their support for Palestinian freedom."

"We call for cutting US military aid to Israel," the group added.

As Splinter's Paul Blest explained, the congresswomen's support for BDS doesn't display itself so much in full-throated advocacy as in simple support for the civil rights of Americans:

In practice, it should be noted, Omar and Tlaib’s offenses during their congressional careers amount to voting against a congressional resolution opposing BDS, and sponsoring legislation Omar introduced reaffirming the right of Americans to take part in peaceful protest. One of the boycotts by "Americans of conscience" cited in the legislation is the boycott against Nazi Germany "in response to the dehumanization of the Jewish people in the lead-up to the Holocaust."

The Israeli move came with the support of President Donald Trump, whose antipathy to the pair is well known.

A Thursday morning tweet which smeared the two congresswomen as anti-Semitic was met with harsh criticism from Sen. Bernie Sanders (I-Vt.), one of the frontrunners for the Democratic presidential nomination in 2020.

"Opposing Netanyahu's policies is not 'hating the Jewish people,'" tweeted Sanders. "We must stand together against those who promote hatred and racism in Israel, Palestine, the U.S. and everywhere."

On Thursday afternoon, Trump doubled down on his comments.

"Representatives Omar and Tlaib are the face of the Democrat Party," the president tweeted, "and they HATE Israel!"

Trump's comments came in for specific criticism from the Council on American-Islamic Relations (CAIR). In a statement decrying the Israeli government's decision, the group's national executive director Nihad Awad drew a line in the sand.

"Elected officials of all political parties must make a choice between supporting a foreign segregationist government occupying another people or backing two American Congresswomen of color who are being targeted by a racist, Islamophobic and white supremacist president," said Awad.

That perception of Israel was echoed by Jewish Voice for Peace executive director Rebecca Vilkomerson.

"For Israel to bar the entry of members of Congress based on their political views is unconscionable," Vilkomerson said in a statement, "but also the perfect illustration of Israel's racist apartheid policies in practice."

Given the allies of the Netanyahu government, Amnesty International Israel's director Molly Malekar said in a statement, barring critics on ideologically flimsy grounds claiming anti-Semitism while allowing right-wing bigots from across the world into the country suggests that the issue is more that two Muslim women who have political power are using it to criticize Israel.

"The Israeli government allows free entry to world leaders accused of gross violations of human rights, war crimes, and crimes against humanity, such as Myanmars generals and Duterte of the Philippines, proudly embracing leaders identified with supporting neo-Nazi and anti-semitic groups such as Hungary's Orbán or Brazil's Bolsonaro," said Malekar, "but automatically calls anti-Semitic anyone who dare criticize it."

"Israel bars entry on the basis of political views to those who critique it," Malekar added. "Criticizing Israel's policies isn't violence."

Ultimately, however, the attempt to silence hard truths about the occupation will backfire, Palestinian-American poet Remi Kanazi opined on Twitter.

"Palestinians are not afraid to have a conversation on Palestine, we aren't afraid to debate or make the case, because we have the truth on our side," said Kanazi. "And no matter how much one tries to extinguish it, that truth seeps through, it gets to the core of people, and quickly shifts them."