The best deep dish pizza is not from Chicago

Of all the cities I’ve lived in, San Francisco has the best 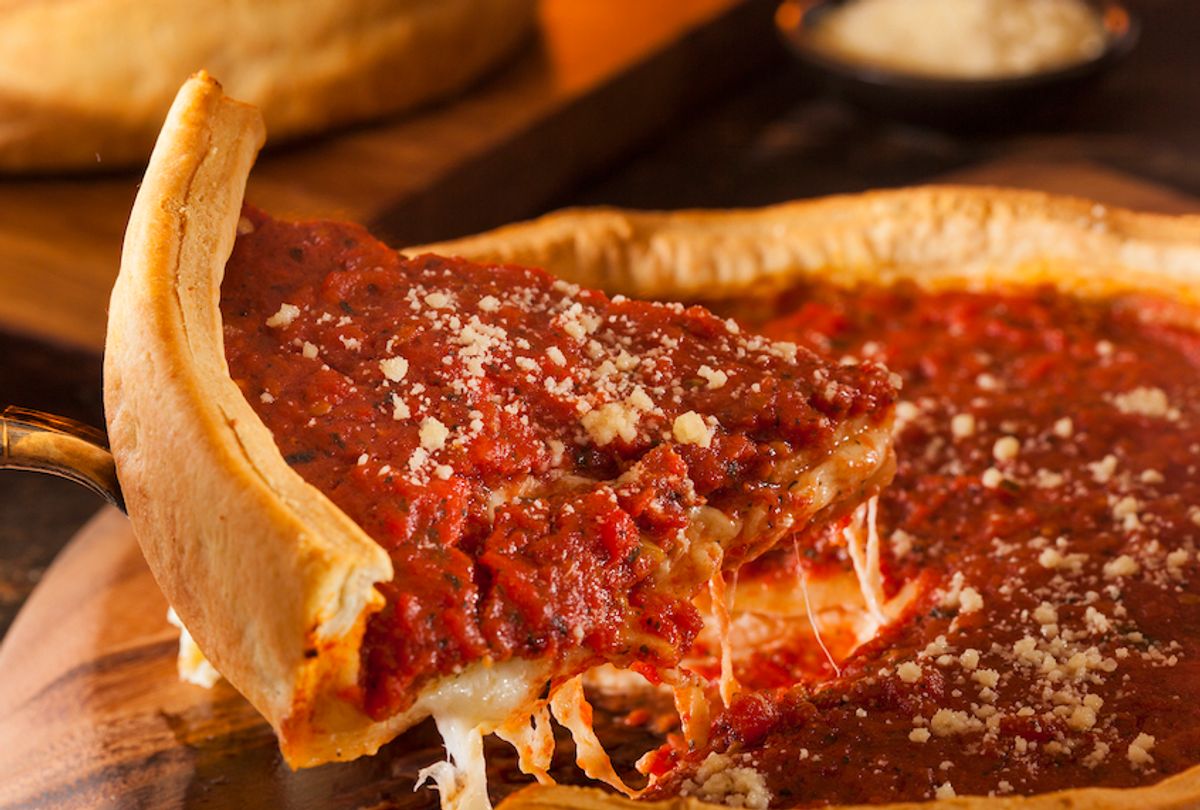 Growing up in the suburbs of Chicago, there were a handful of city staples that made up my Midwestern identity. First, I was a Cubs fan, and since the Cubs never won — ever — I believed that made me a more loyal person. Second, I believed the unbearably-cold winters gave me what my mom called "character and resilience." And third, having been raised on Chicago deep dish pizza, I knew how the best pizza in the world tasted. Therefore, I was a world-class pizza connoisseur.

I loved deep dish pizza so much as a kid that my dream job at was to work at Chicago's iconic Lou Malnati’s Pizzeria, which was near my house in Schaumburg. At 16, that fantasy came true. My friend who worked at Lou’s as a waitress helped me get me a job as a hostess. When I wasn’t seating hungry families of four in the wooden dining room, I was back in the kitchen watching the chefs in awe as they tucked the toppings above the cheese and underneath the tomato sauce.

If you're unfamiliar with the proper order of ingredients on a Chicago deep dish pizza, it is as follows: crust, cheese, toppings and tomato sauce. Of course, the biggest perk of the job was getting free and discounted pizza. If the chef made the wrong pizza, I’d get a slice with the rest of the house. If my parents wanted pizza for dinner that night, I could get them a discounted pie. Once, my friend and I wanted to see how long we could go only eating pizza. We hypothesized a month, but we only lasted a week and a half. Still, my love for Chicago deep dish never faltered.

Chicago’s deep dish pizza as it is known today is a relatively new tradition. The first commercial deep dish was created by Ike Sewell and Ric Riccardo, the founders of Pizzeria Uno. However, there has been some debate as to who actually made the very first Chicago deep dish pizza. Aldopho "Rudy" Malnati Sr. reportedly worked as Riccardo's bartender, and it has been said that he contributed to the Uno’s original recipe. Lou Malnati was Rudy’s son.

I haven’t lived in the Chicago suburbs since high school. I went to college in Iowa, and I moved to New York City after I graduated. I always knew leaving Chicago meant leaving Chicago deep dish pizza, but I also thought there must be Chicago deep dish in New York, one of the food capitals of the world. Wasn’t the best thing about living in Manhattan having every type of delicious food at your doorstep?

I was surprised to discover that looking for Chicago deep dish pizza in New York was like mining for gold in Northern California — impossible to find. In New York, the only pizza option is New York-style pizza. While it made for good drunk munchies, I often found its hand-tossed, thin crust tasted no different than the paper plate upon which it was served. I was in a pizza crisis, and I was not alone. Everyone I knew who had moved from Chicago felt as I did. I know this is incomprehensible to New Yorkers, but for us it was a real downside to living in New York.

In 2013, I moved to San Francisco. While I was excited for better weather and a more laid back California lifestyle, a part of me did believe I was only moving further away from a decent slice of pizza. Maybe it’s because they don’t have to eat their way through winter, but I always thought that warmer states had the worst pizza. Perhaps it was that very-low expectation I had that made my discovery of San Francisco’s pizza scene so shocking. Not only were there options other than New York-style pizza, à la Neapolitan pizza and even Hawaiian, but there were a variety of Chicago-style pizzerias to choose from, too.

First, I discovered Little Star pizza in the Mission, which specializes in deep dish pizza made with corn crust. Its gooey cheese and buttery, crispy crust is simply better than Lou Malnati’s back in Chicago. Then there is a little hole-in-the-wall joint in the Richmond district called Grinders Pizzeria, which was founded the Chicago Tribune’s former pizza critic Joe Irick and Amanda Petrowski. As their website says, “One bite will take you right back to the windy city.” But, honestly, after eating Grinders, I don't want to go back to the windy city for pizza. I want to stay right here! It helps that the spot is decoarted like a dingy Chicago sports bar, making me feel right at home. Zachary’s in the East Bay is also delicious and lives up the hype, too.

The truth is this: Since moving to the San Francisco Bay Area, I have not craved Chicago deep dish like I used to in New York, because the pizza here is without a doubt better than the pizza back home. Plus, since I’m removed from the intense Chicago deep-dish rivalry in the Bay Area, I don’t feel bad loving multiple deep-dish establishments. In Chicago, I have to stay loyal to Lou Malnati’s. If I don’t, I risk getting into a long argument about the best deep dish in the Windy City.

Chicago-style pizza holds a warm place in my heart, so it hurts me a little to say it but the freshness of the ingredients here in California makes the pies that much better. Ironically, what makes Lou Malnati’s great are the tomatoes, which are allegedly hand-picked from California each year. Pizzerias here also tend to get a little more creative with their pies. For example, at Little Star, one pie has mushrooms, onions and spinach blended with ricotta and feta cheese.

If you ever find yourself in the Bay, don’t be afraid to stray from traditional California cuisine. The pizza is definitely worth it. I never thought I’d find better pizza in California. Then again, crazier things have happened — like adding a banana topping to a pie.