The U.N.'s bleak view of the planet's future

And the U.S. is incapable of even discussing the climate crisis, much less addressing it. 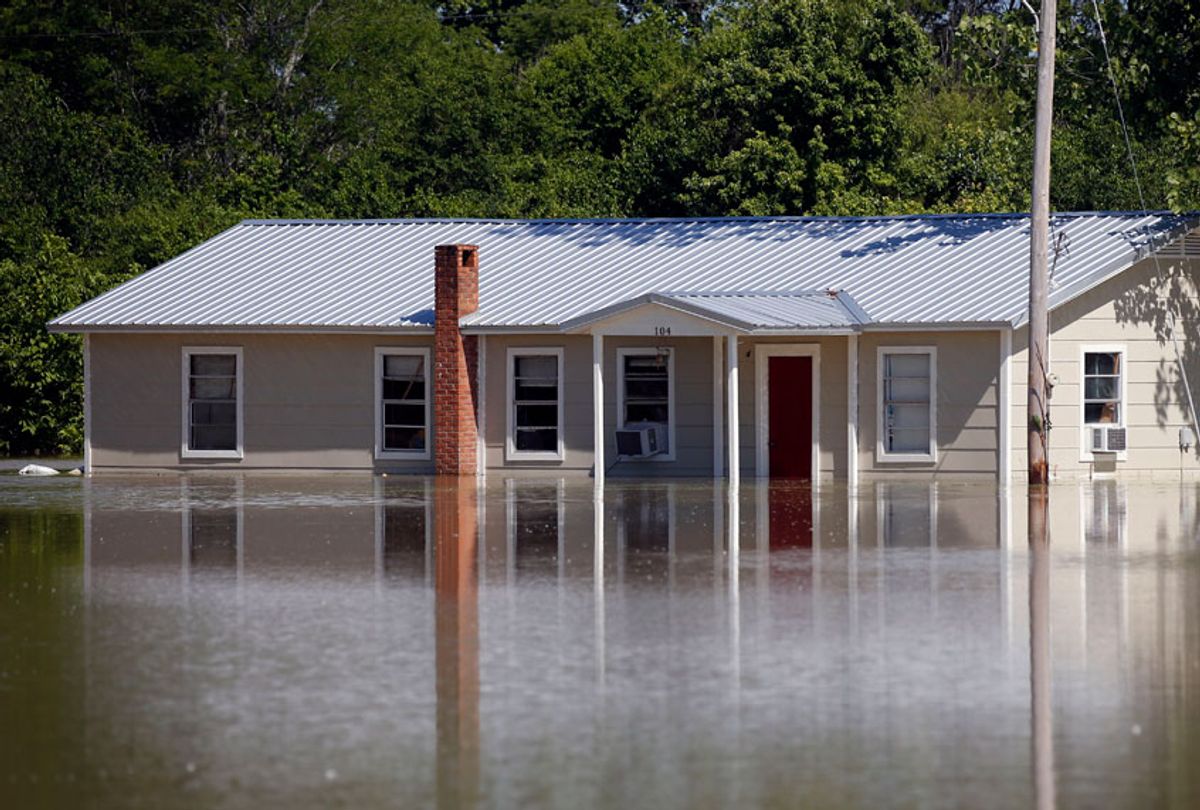 In this Thursday, May 23, 2019 photo, floodwaters overtake a home in Holly Bluff, Mississippi. (AP/Rogelio V. Solis)
--

That we cannot take gun control seriously, that we can’t talk about abortion or race or tax cuts forthrightly and honestly spells big trouble for dealing with the kind of food and water shortages being laid out in a new report by the United Nations’ Intergovernmental Panel on Climate Change.

The report, which includes the work of 107 experts from 52 countries, is a devastatingly serious outline of what is coming. It’s not some worst-case scenario to be dismissed with a White House back of the hand, it’s not some sci-fi movie. Its conclusions reflect the science of what is already underway to turn large portions of Earth un-plantable and probably un-livable.

As if to underscore the point, The New York Times coincidentally published an analysis of water shortages growing out of control, with 17 nations showing substantial problems in having freshwater supplies for its cities. Some were arid to start with, but others like parts of Brazil and Mexico are busily pumping out groundwater, previously sacrosanct water sources, to meet population needs. Projected out, The Times report says a quarter of the globe faces important water shortages.

I’m mostly worried that we lack the ability to have an intelligent debate about our current-day issues, and it is hard to imagine how we can take such a me-first America to a table to discuss what happens to the entire globe.

Without trying to scare people, the UN climate group says a half-billion people already live in places turning into desert, and soil is being lost between 10 and 100 times faster than it is forming, according to the report, which was released in summary form. Climate change will make those threats even worse, as floods, drought, storms and other types of extreme weather threaten to disrupt, and over time shrink, the global food supply. Plus heating the planet will widen uninhabitable areas.

I’m mostly worried that we lack the ability to have an intelligent debate about our current-day issues, and it is hard to imagine how we can take such a me-first America to a table to discuss what happens to the entire globe.

Already, more than 10% of the world’s population remains undernourished.

For the United States and Europe, which are undergoing fairly awful arguments about current-day immigration from those fleeing wars, gang violence and horrible economies, you can begin to worry about how we will expand this view to include vast numbers of climate refugees.

The idea that this climate report hit as Americans try to sort out public mass shootings inspired by hate for The Other, for immigrants and non-whites, the prospects for intelligent, empathetic consideration of what to do about climate migration simply boggles the mind. Start with the fact that we have a president in Donald Trump who is a Climate Change denier, sprinkle in a healthy dose of inherent racism, his insistence on rewarding greed over the welfare and well-being of all, and you can see the stew we are cooking.

The report details how climate change is threatening food and water supplies for humans, turning arable land to desert, degrading soil and increasing the threat of droughts and other disasters. As have previous studies, it puts most of the blame on fossil fuel-burning power plants and automobiles but adds that agriculture and forestry account for 23% of total human-caused greenhouse gas emissions.

Despite global statements to take aggressive action to keep global temperatures from rising 2 degrees Celsius – minus the United States, of course, since Trump withdrew our participation – the report again underscores the needs to make fundamental changes in what we eat globally, how we farm, what we plant, and cutting emissions, all while feeding growing populations.

News reports talk about the panel’s call for “unprecedented” actions to cut their carbon emissions over the next decade to avoid devastating effects from rising seas, more intense storms and other impacts of climate change. They also say that we need to plant large swaths of land currently used to produce food to growing trees that store carbon and to use crops designated for energy use.

It’s important to note that as we read these things, our politicians are routinely trashing the aspirations of Green New Deal programs as radical, leftist and somehow unpatriotic.

But rather than addressing themselves to the aspirations as just that, too many are just turning away to worry about tax cuts and other economic incentives to assure short-term successes for American corporations.

It was interesting to see that a quarter of the problem traces to flatulence by livestock, nitrous oxide emissions from the earth and artificial fertilizers. At the same time, there have been years of deforestation efforts in the Amazon, Indonesia and even in the U.S. West, harming the ability of forests to retain carbon dioxide.

We are often asked what we can do as individuals. Apparently changing our diet to less meat and more vegetable would be helpful. On a global scale, that could have real effect. The other day, New York Mayor Bill De Blasio and Fox commentator Sean Hannity went at it over a mayoral proposed “Meatless Monday” for school students, with Hannity ridiculing the idea and the mayor. This does not speak well for intelligent conversation about future diets.

Of course, all of the changes that get listed in such reports inevitably have direct effects on national economies – and jobs. Clearly, that is awful, which is why the Green New Deal projects all try to link with job retraining and changes in government support for individuals, along the lines of Democratic candidate Andrew Yang’s proposal for $1,000 a month for each adult in the country.

The Washington Post said that left unchecked, climate change could imperil food security in parts of the world, putting further strain on a food system that’s already stressed, citing the report. Crop yields could shrink. Foods such as wheat could become less nutritious. Damage from thawing permafrost could endanger infrastructure. Water scarcity could become an urgent problem in dry areas.

In our culture of excess, we need to ask ourselves some important questions.