Pat Buchanan back on PBS, really? Why we don't need a "McLaughlin Group" revival now

"The McLaughlin Group" set a standard for shouty, "newsy" debate shows. We don't need it or Buchanan back on PBS 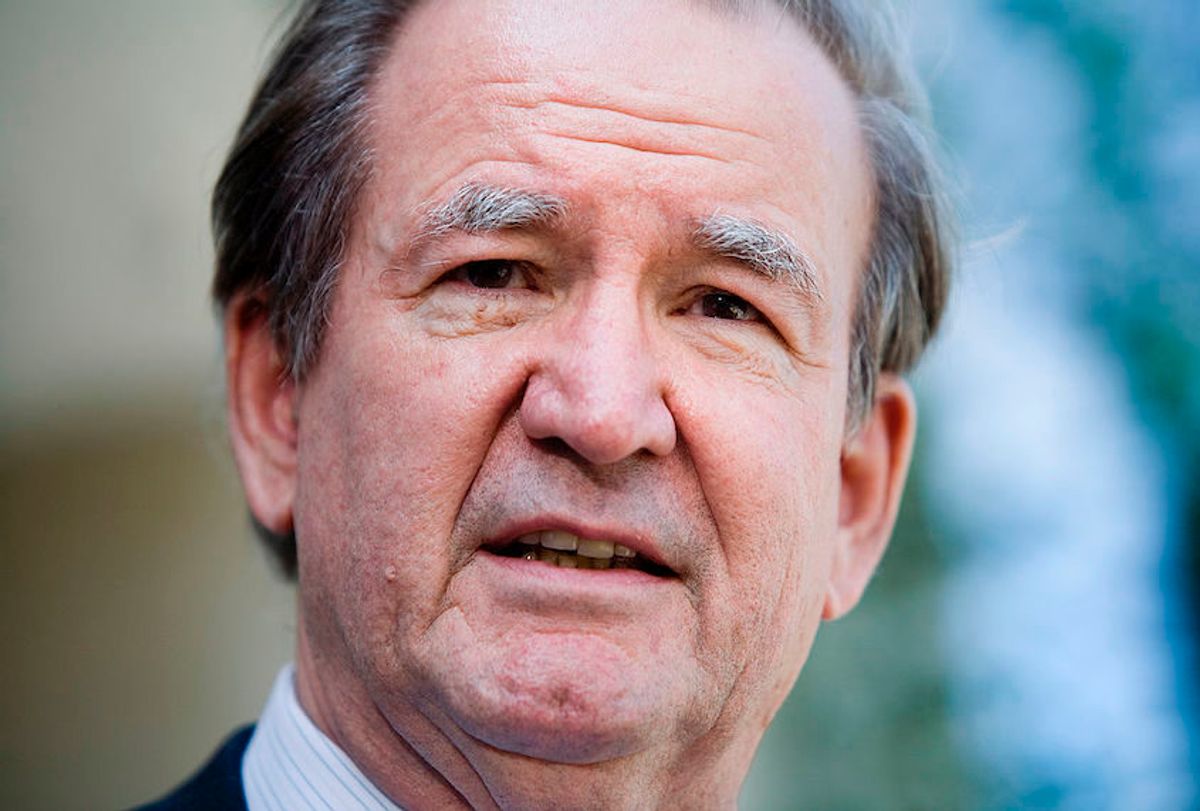 One thing our reboot and revival culture fails to account for is that many of yesteryear’s cultural stalwarts don’t withstand the test of time.  Pick a year — 1982, for example — and you’ll find “Blade Runner,” “The Dark Crystal,”  “Conan the Barbarian,” “Fast Times at Ridgemont High” and “Tron” on that year’s list of releases, all titles that either influence modern TV shows or films, have been remade or revived, or will be.

To my knowledge there hasn’t been much clamoring for a remake of “Porky’s,” which ranked fifth on the list of top domestic box office earners in 1982, making it far and away more popular than any of the films listed in the prior paragraph. Times have changed, and that flick has not aged well in the 37 years since its initial release.

It should go without saying that a similar rule applies to television news and public affairs programming that was once considered central to the nation’s political and social dialogue. Newscasts are somewhat more immune to passage of time than other formats, but our means of digesting and analyzing politics has transformed as drastically as media landscape itself.

In 1982, PBS stations made “The McLaughlin Group” a core political affairs program of the Ronald Reagan era. Surely there were similarly themed public affairs programs in local markets, but only John McLaughlin's political roundtable was brash and grumpy enough to be worth parodying on “Saturday Night Live.”

Many Gen Xers probably remember Dana Carvey’s impression of McLaughlin more than any specifics about the host he was imitating other than his signature bellow of “Wrong!” when he disagreed with one of panelists — the core group consisting of Pat Buchanan, Eleanor Clift and Clarence Page  — or wanted to transition to the next topic of debate.

It is possible that a number of middle-aged conservatives grew up with him, given that the series aired for 34 years until McLaughlin’s death three years ago, with the final episode recorded on August 12, 2016.

And if you didn’t realize that the show aired consistently for those 34 years, that’s probably because “Crossfire,” “Hardball with Chris Matthews,“ “Hannity & Colmes,” then just “Hannity,” “Tucker,” “Tucker Carlson Tonight,” “The Five,” “The Kelly File,”  “The Ingraham Angle,” and a number of other shouty shows on down to “The View” have come and gone or are here to stay.

We’re swamped with so-called debate shows across cable, and on Sunday morning talk shows on broadcast. We probably don’t need another, and I can’t think of anyone campaigning for public television to exhume the grandfather of paleoconservative debate series, dust it off and put it back on the air.

Naturally this means that “The McLaughlin Group” minus McLaughlin is returning to TV.

For this, send your thanks to Maryland Public Television. The revived “McLaughlin” is hosted by Washington Examiner columnist and McLaughlin’s mentee Tom Rogan, who will be joined by the original panelist team of Page, Clift and yes, Buchanan.

Rogan’s resurrected “McLaughlin” stirred to life on Sinclair Broadcasting-owned WJLA-TV in Washington, where it aired for a few months on Sundays in 2018 before going online-only. The MPT-produced version begins airing in Maryland and Washington, D.C., area starting on September 6. As of January 2020, American Public Television will make it available to PBS member stations across the country.

At the moment the main point of contention with the program’s return is that Buchanan is coming back. Any person still in touch with their conscience should have a problem with that, given Buchanan’s long history of being a segregationist, an anti-Semite, a sexist and a homophobe, to list some of his finer qualities.

Media Matters for America, which sounded the alarm on Buchanan’s return to public television, reached out to Maryland Public Television and received the following statement: “Public media provides a big tent for the expression of many points of view. The McLaughlin Group has been a long-time staple on public TV. It’s a program series viewers appreciate for its wide range of views and perspectives, as well as the lively debate on issues that takes place among its panelists.”

The media has had many opportunities to deny Buchanan a platform, and yet he’s been a consistent presence on television more or less ever since “The McLaughlin Group” first premiered. When he wasn’t making unsuccessful runs for office, he was popping up as a cable news contributor.

And the host of CNN’s “The Lead with Jake Tapper" succinctly explained why this is the case. “In between his racist, sexist, xenophobic, homophobic and anti-Semitic rhetorical outbursts, Buchanan speaks cogently and with conviction about a number of subjects -- including trade, abortion and foreign policy -- that clearly resonate with voters,” Tapper explained.

In fact, Tapper wrote that paragraph in the publication you’re reading right now, 20 years ago. But the fact that he could believably have said it yesterday indicates not merely why Buchanan shouldn’t be further normalized by a regular platform on PBS, but why PBS member stations’ audiences aren’t particularly served well by a return of “The McLaughlin Group” in general. The short answer is, we don’t need it.

In 2019 consumers have numerous choices from which to obtain fact-based reporting or misinformation, or opinion and partisan hackery masquerading as point-counterpoint debate. Entire networks devote their schedules to biased ringmasters and political propagandists spouting erroneous data or fearmongering talking points to a public that would rather be validated than informed.

Often these men and women are pitted against legitimate journalists and accredited researchers strenuously attempting to fact check their erroneous, harmful statements, and the outlets in question assure themselves and their audience that this false balance is their effort to be fair.

Fox News, MSNBC and CNN all engage in their versions of political argument theater, with Fox far and away being the prime practitioner, giving viewers far too many options to watch talking heads of every partisan stripe (or on Fox, right wing versus extremely right wing) yell at each other.

What’s lacking is a venue for reasonable discourse about the social, cultural and political issues. The new “The McLaughlin Group” may declare that reasonable discourse is its intent, but the original never adequately served that purpose. It was always a more polite but stodgier version of “Crossfire” — a cancelled format co-created by Buchanan.

And while the Buchanan of the ‘80s and ‘90s might have been excused as a Nixonian paleoconservative who went against Republican party orthodoxy, today his views are completely in line with the type of white nationalism that has become the conservative brand. His strain of conservatism is incapable of honest, illuminative, useful debate. A few years ago I would have called his rhetoric dangerous, but now it’s dangerously mainstream, completely in-step with the administration’s stated views and goals, which means “The McLaughlin Group” probably won’t be offering anything different than what’s on cable news.

Beyond its indistinctness, and its employment of Buchanan (an indistinct factor in itself, depressing as that may be), a greater point of objection is that a show like this isn’t a necessity for PBS.

Between “PBS NewsHour,” “Frontline” and its resilient documentary programming, the Public Television Service consistently ranks among the least biased of major news outlets in journalism surveys, one of the most recent being the Gallup and Knight Foundation’s 2017 Survey on Trust, Media and Democracy released in 2018.

And PBS is doing its part to stay attuned to the times, evidenced in its launch of the tongue-in-cheek “Retro Report” this coming October, a show that places current events in the context of history to reveal to viewers the roots of why a particular issue has become a flashpoint.

At a time when our memory of how we got to this place is so fragile, and our amnesia so prevalent that we can’t remember when the last terrible thing that happened actually occurred, this type of program is a true service. It proves that gazing back in time really can be enough to understand why certain things repeat on their own, with little to no urging. That the past is left in the past, and not everything needs to be brought back — in part because they’ve never actually left, they’ve simply proliferated.