Some 2020 Democrats see a public option as a means to an end. Others see it as an end state in itself. 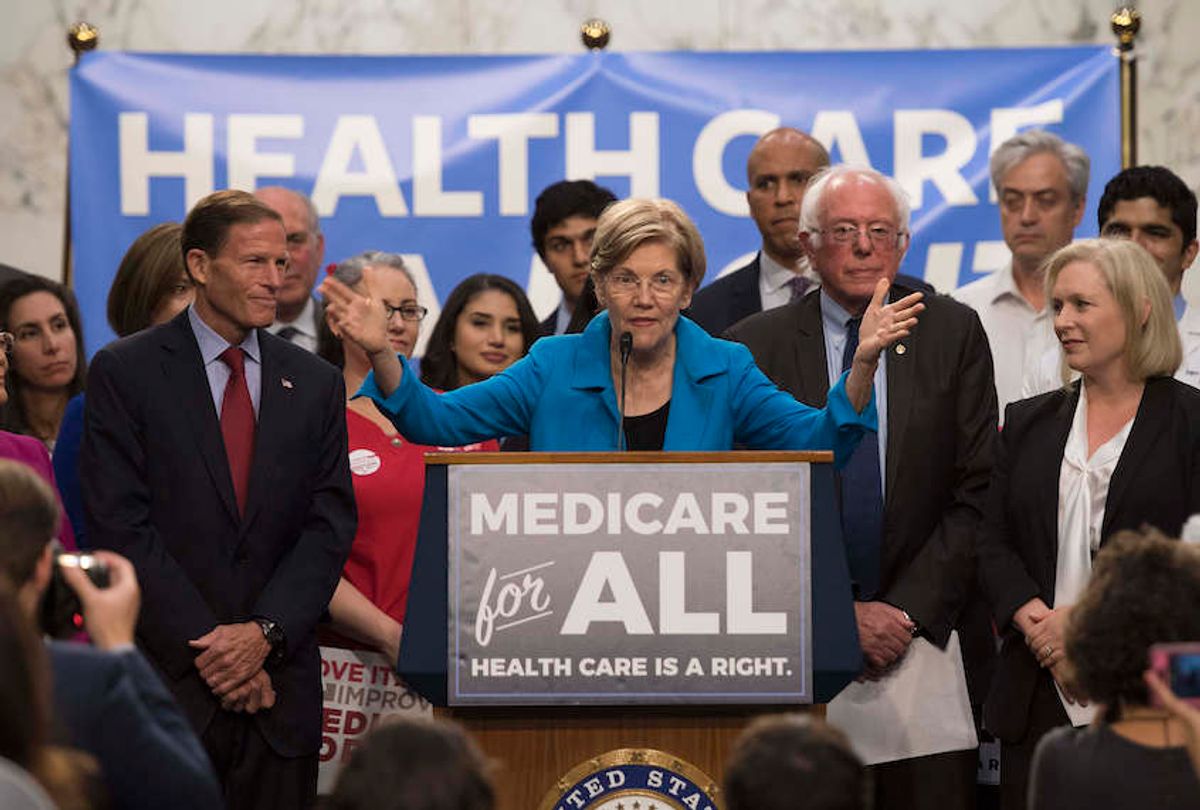 Health care has emerged as a defining issue of here the 2020 election. All Democrats vying to take on President Donald Trump want to improve the nation's health care system — but they are deeply divided about how to do that. Some candidates want to abolish private health insurance in favor of a single-payer system, while others want to offer a "public option" that would build more gradually on model of coverage that is currently in place.

So far, the debate among presidential hopefuls has largely centered over sweeping proposals to completely overhaul the the nation's health care system. Democrats have spent a lot of time talking about "Medicare for All," the plan popularized by Sen. Bernie Sanders, I-Vt., which would eliminate private insurance and move every individual under a government-run plan. Massachusetts Sen. Elizabeth Warren, New York City Mayor Bill de Blasio and the progressive wing of the Democratic Party have offered full-throated support for this proposal.

Public option plans put forth by a host of contenders, on the other hand, have received far less public attention, despite their ubiquity on the campaign trail and generally lower costs. Those proposals range from modest to overhauls so wide-ranging they resemble Medicare for All. Others fall in the middle of the two camps, offering incremental reforms which could lead to a single-payer system over a long timeline.

Although the term "public option" is discussed often on the campaign trail, what it means varies widely among the candidates who support it. Some seeking the nomination see a public option as a means to an end. Others see it as an end state in itself.

"The general idea of a public option is that everyone would have the option to purchase or buy into a government-run health program like Medicare, but they wouldn't necessarily be automatically enrolled in it. Private health insurances would continue to exist and compete with the government-sponsored plan," Erin Fuse Brown, a law professor at Georgia State University and co-author of "Health Law: Cases, Materials and Problems," told Salon.

The variations in public option proposals depend on their design. Some would upend the nation's health care system, while others would make reforms which would go unnoticed by the majority of consumers.

Sen. Kamala Harris, D-Calif., for one, envisions a sweeping health care overhaul. Her Medicare for All plan would set up a government-run system but allow private insurers to offer competing plans. She proposes transitioning people from the existing system to Medicare for All over the course of ten years, instead of four like Sanders, and vowed not to raise taxes on families making less than $100,000 to pay for the plan. Sanders' proposal, meanwhile, would impose taxes on households making more than $29,000.

Harris's plan enables her to deliver on her promise of universal coverage — a major priority for the Democratic primary field — while offering a plan that appears less radical to individuals who are concerned moving the country to a single-payer system in just four years would be impossible and too disruptive.

"At the end of the ten-year transition, every American will be a part of this new Medicare system," Harris wrote in a Medium post outlining her proposal. "They will get insurance either through the new public Medicare plan or a Medicare plan offered by a private insurer within that system."

Mayor Pete Buttigieg of South Bend, Ind., has expressed support for a similar plan, which he has called "Medicare for All who want it."

Allison Hoffman, a professor at the University of Pennsylvania's Law School and a senior fellow at the Leonard Davis Institute of Health Economics, noted Harris's approach might present a more viable pathway to reaching universal health coverage, in part because it maintains a role for private insurers and thus offers more choice that some individuals are worried of losing in a single-payer system.

Hoffman, however, warned against the belief that people will ditch their private insurance and transition to the public option — even if it's objectively better — if both plans are offered.

"People stay with what they're accustomed to. They're afraid of change in this area," she said. "Unless that public option is so much better than everything else — and even if it is — people won't be able to tell. It's really hard to figure out which insurance plan is best."

"People care about choice in health care when it comes to their doctors. People want doctors who they trust, who are convenient for them, who are near their home," she added. "People do not, for the most part, value having a choice of a health care plan. In fact, many people actively dislike the experience of having to choose among health plans. If you're going to sell choice, sell choice of doctors — don't sell choice of health plans."

On the opposite end of the spectrum is former Vice President Joe Biden's public option proposal. Biden's plan would help 97% of Americans get coverage. It would be sold on the ACA's exchanges, a marketplace for plans that provides subsidies to people who don't get coverage through their employer, and would offer lower premiums than existing private options. The plan would cost $750 billion over a decade, and would be paid in part by reversing some of Trump's tax cuts.

More progressive is "Medicare for America," a bill by Reps. Rosa DeLauro, D-Conn., and Jan Schakowsky, D-Ill. Former Rep. Beto O'Rourke, D-Texas, has offered support for the legislation on the campaign trail.

Medicare for America is the Democratic Party's more centrist approach the single-payer model backed by Sanders and other progressives. It would achieve universal coverage, but leave employer-based insurance in place for those who want it. It would eventually get rid of private insurance by enrolling all newborns into a government health plan and decreasing the role of employer-sponsored coverage over time. The uninsured, existing Medicaid or Medicare or Obamacare recipients would be moved into the new plan right away.

That plan dangles too far left for Sen. Michael Bennet, D-Colo., who favors a bill called "The Medicare-X Choice Act" that he co-authored with Sen. Tim Kaine, D-Va. "MedicareX" would be sold on the ACA's exchanges, and would phase in over several years. It would be available in rural areas with few private plans by 2021 and spread nationwide by 2024. Small businesses could buy it for their workers by 2025. The senators expect this option will "create competition in the marketplace" and thus encourage other health care providers to lower costs.

MedicareX and similar plans can be considered a "gap filler," Hoffman said.

"Those plans are not going to grow over time. They instead offer coverage where private insurers have decided not to play, such as rural communities, states that failed to expand Medicaid or those that have few options on the ACA marketplace," she explained. "Those plans are less contentious because the state and private insurers have already said 'We're not going to play here,' so it's harder to argue against the federal government coming in and offer coverage."

More sweeping public option proposals and most Medicare for All proposals, meanwhile, are considered less politically feasible because they could displace the entire health care system. But they could be more affordable, despite variations in design.

"Medicare for All — either as a public option or as a single-payer option —should result in less money going out of your pocket," James Hodge, public health law and ethics professor at Arizona State University who has drafted several model public health laws, told Salon.

"Medicare, as a program, is run at a significantly lower cost than virtually every private health insurance. It's run administratively better and Medicare pays out less for the same services. Doctors may not like that but the reality is they'll have to take it because that's tens of millions of patients they can't turn away," he continued. "The government does and should appreciate it has the capacity to dictate some of that in a way that is still viable for the health care industry to make its profit which it will continue to make."