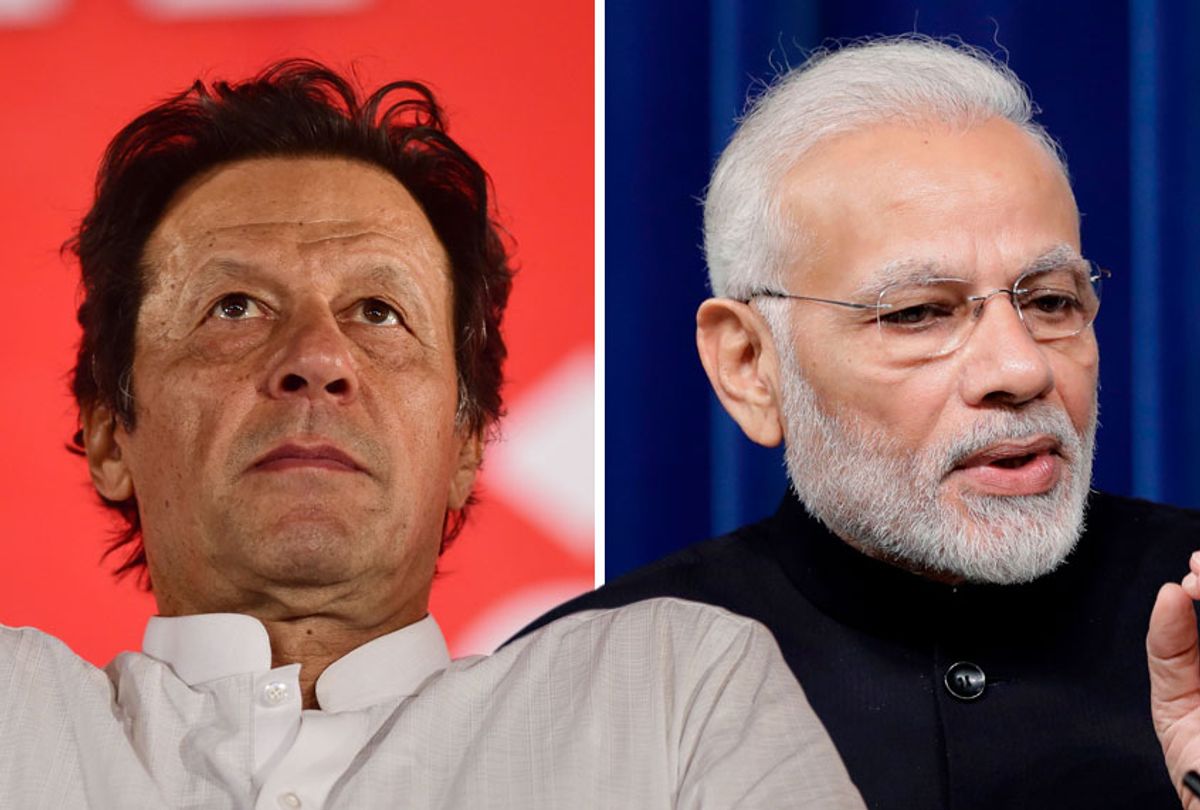 Pakistani Prime Minister Imran Khan on Sunday likened the Indian government to that of Nazi Germany in comments that represented the latest escalation in tensions between the two rivals that have been sent into overdrive over the disputed territory of Kashmir since India invaded the region in early August.

"India has been captured, as Germany had been captured by Nazis, by a fascist, racist Hindu Supremacist ideology and leadership," tweeted Khan. "This threatens 9 million Kashmiris under siege in [India-Occupied Kashmir] for over two weeks which should have sent alarm bells ringing across the world with U.N. Observers being sent there."

India's behavior, Khan said, was evidence of "the link between the Nazi ideology and ethnic cleansing and genocide ideology of the RSS-BJP Founding Fathers."

Indian Prime Minister Narendra Modi told President Trump Monday that Khan's tweets were a barrier to peace in the region.

In a veiled attack at Imran Khan, PM Modi said certain leaders in the region were inciting anti-India violence which is not conducive to peace. He also highlighted the importance of creating an environment free from terror and violence and eschewing cross-border terrorism without exception, sources said.

India's takeover of Kashmir has resulted in an authoritarian crackdown, with military rule over the territory and the imprisonment of many political and activist leaders.

As Common Dreams reported on Aug. 5, India's government voted to revoke Article 370 of the country's constitution, which recognized Kashmir's autonomy, paving the way for taking over the region:

Annexation of Jammu and Kashmir has long been a priority for the BJP and their Hindu nationalist allies; the revocation of Article 370 was a major part of the party's platform in its electoral victory earlier in 2019 which returned Prime Minister Narendra Modi to office for another term.

Control of the region has triggered two wars between India and Pakistan in recent decades.

And, as reported by the New York Times on Saturday, Modi's government is preparing to take further steps to promote Hindu nationalist ideology by stripping the country's non-Hindu minorities of citizenship and placing them in planned detention camps.

"Muslims are the enemy," said Mander. "It's a war on the Indian Constitution."

In his tweets Sunday, Khan referred to Modi's detention plans for victims of the new policies as a dangerous precedent.

"Already four million Indian Muslims face detention camps and cancellation of citizenship," said Khan. "World must take note as this genie is out of the bottle and the doctrine of hate and genocide, with RSS goons on the rampage, will spread unless the international community acts now to stop it."