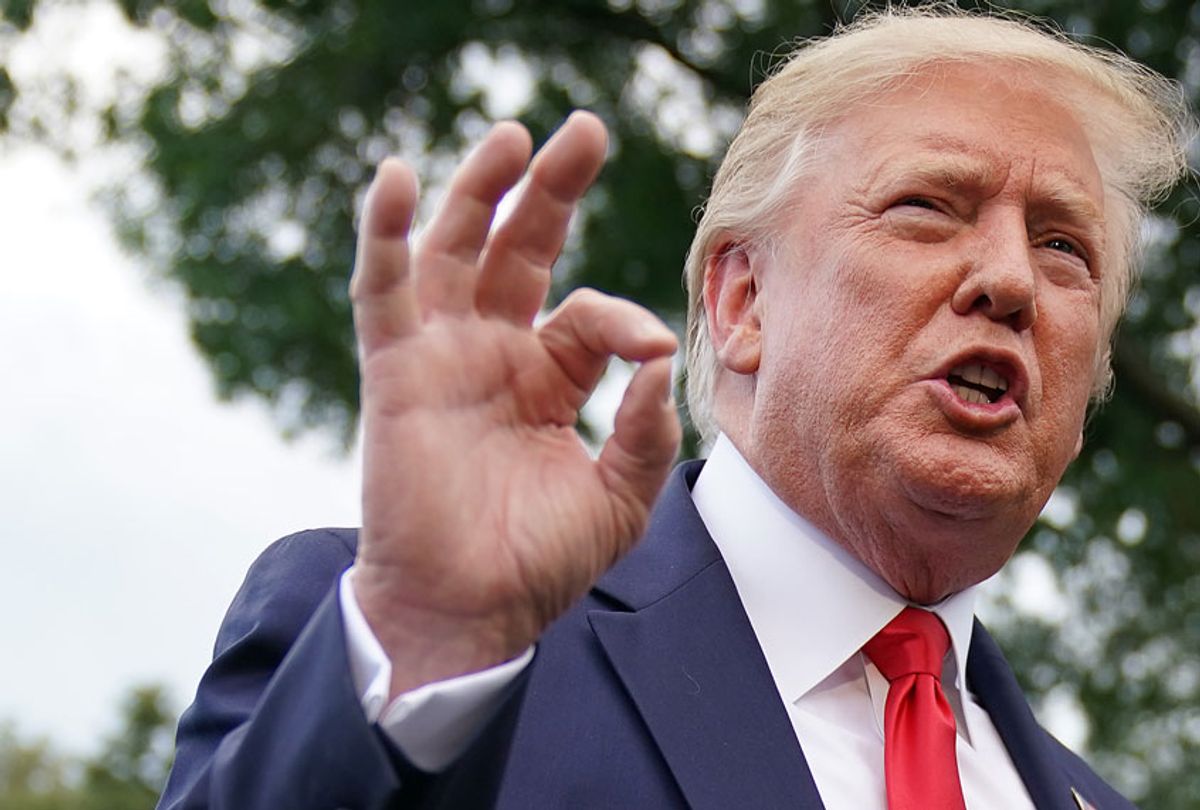 President Donald Trump took to Twitter to quote a conservative radio host and known conspiracy theorist who hailed him as "the greatest President for Jews" and claimed that Israelis "love him like he is the second coming of God."

In a series of Wednesday tweets, Trump thanked Wayne Allyn Root for "the very nice words."

The president's remarks come one day after he criticized Jewish Americans who vote for Democrats, declaring that doing so "shows either a total lack of knowledge or great disloyalty."

Trump made the remarks on Tuesday while speaking to reporters in the Oval Office about Israel's decision to prohibit Democratic Reps. Ilhan Omar of Minnesota and Rashida Tlaib of Michigan from entering the country. The lawmakers were barred from entering the country because of their support for the pro-Palestinian boycott, divestment and sanctions (BDS) movement.

"Five years ago, the concept of even talking about this . . . of cutting off aid to Israel because of two people that hate Israel and hate Jewish people — I can't believe we're even having this conversation," Trump said Tuesday. "Where has the Democratic Party gone? Where have they gone where they're defending these two people over the State of Israel?"

The president's comments were swiftly condemned by left-leaning Jewish groups, who argued the president was playing off anti-Semitic tropes which falsely claim Jewish Americans have a dual loyalty to Israel.

"It's unclear who @POTUS is claiming Jews would be 'disloyal' to, but charges of disloyalty have long been used to attack Jews," Anti-Defamation League CEO Jonathan Greenblatt tweeted later Tuesday. "As we've said before, it's possible to engage in the democratic process without these claims. It's long overdue to stop using Jews as a political football."

Halie Soifer, the Jewish Democratic Council of America's executive director, called the remarks "yet another example of Donald Trump continuing to weaponize and politicize anti-Semitism."

The Republican Jewish Coalition, on the other hand, defended Trump.

"President Trump is right, it shows a great deal of disloyalty to oneself to defend a party that protects/emboldens people that hate you for your religion," the group tweeted Tuesday. "The @GOP, when rarely confronted w/anti-Semitism of elected members always acts swiftly and decisively to punish and remove."

Tuesday was not the first time that Trump has accused the Democratic Party and its supporters of being "anti-Israel."

Trump has previously suggested Jewish Americans have a dual loyalty to Israel and its prime minister, Benjamin Netanyahu. He told the Republican Jewish Coalition in April that Netanyahu was "your prime minister."

He has also accused the Democratic Party and its supporters of being "anti-Israel" in the past.

The president's comments on Tuesday appear to be part of a broader effort to spotlight divisions among Democrats over Israel and anti-Semitism in an attempt to increase his popularity among Jewish Americans, who are far more likely to vote for Democrats than Republicans and oppose Trump.