Trump's anti-Semitic comments are the new normal: Threats and blackmail are all he has left

Trump accusing Jewish Democrats of "disloyalty" is part of a larger pattern: Winning votes through blackmail 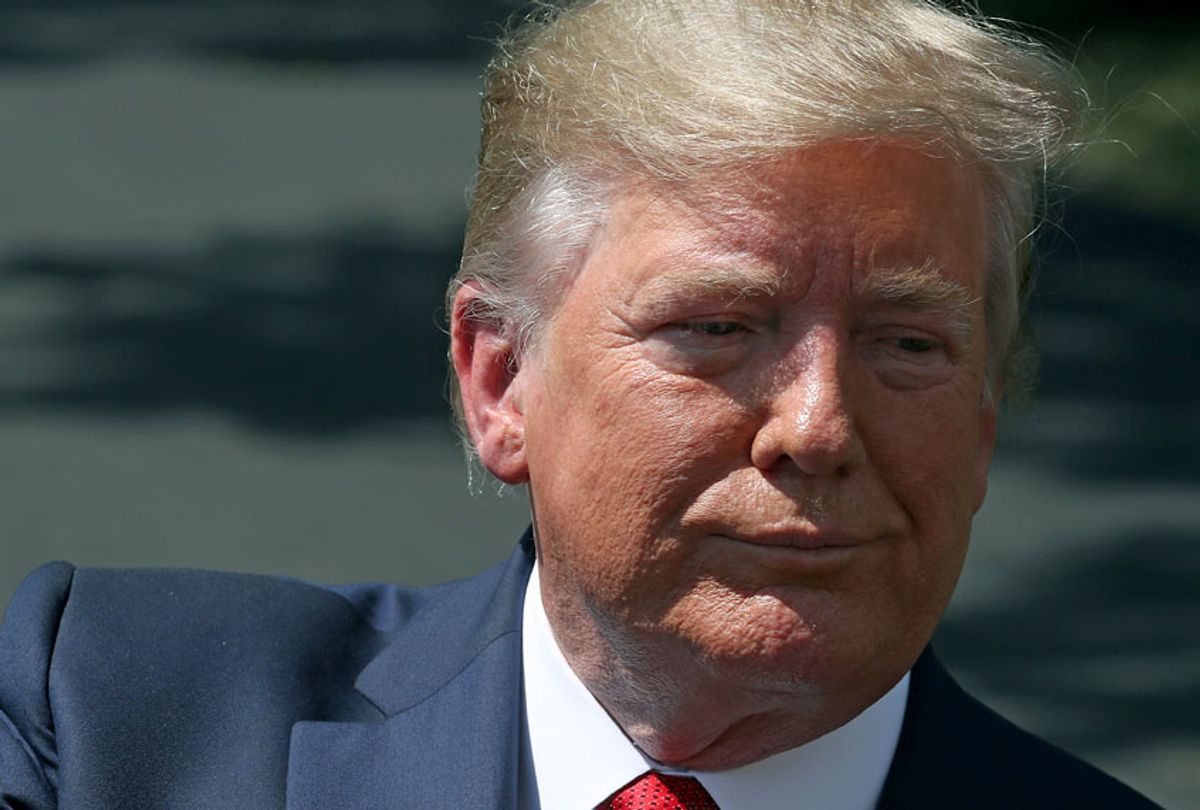 Predicting that Donald Trump will run the most negative campaign in living memory in 2020 does not, of course, take great analytical genius. It feels wrong to use words like "plan" or "strategy," of course, as Trump is merely a bundle of impulses, all of them ugly and mean-spirited. But there can be no doubt that Trump's main campaign strategy will be to blanket the airwaves and social media with spitballing insults and attacks on the Democratic candidate, with an eye towards demoralizing the left, driving down voter turnout and winning as he did in 2016, by the skin of his teeth.

But it's increasingly clear that Trump won't just go full negative on his opponents. His behavior this month suggests that the strategy — if it can even be called that — is to go negative on his own potential voters, as well, using threats, browbeating and fear-mongering in an effort to coerce people into voting for him.

That much is clear in Trump's behavior towards Jewish voters in the past week. On Tuesday, Trump, who seems to have just found out that fewer that one-quarter of Jewish voters backed him in 2016, lashed out, throwing a fit that he didn't get more of a vote he clearly feels entitled to.

"I think any Jewish people that vote for a Democrat, I think it shows either a total lack of knowledge or great disloyalty," Trump told reporters.

As with much of what's rattling around in Trump's brain, this eruption seems to have been inspired by something Trump saw on Fox News earlier in the day, in this case it was "Fox & Friends" host Brian Kilmeade declaring in the morning that it was "stunning" that Jews aren't behind Trump, when Trump is such an aggressive defender of Israeli Prime Minister Benjamin Netanyahu and his right-wing government.

This idea that the Jewish vote in the United States is, or should be, shaped by support for the Israeli right, is asinine enough. But Trump, as is his habit, took it to the next level with this "disloyalty" framework. As many pointed out, fascists and other anti-Semites have long used accusations that Jews are a disloyal fifth column in order to justify oppressing them. Just a few months ago, conservatives accused Rep. Ilhan Omar, D-Minn., of invoking that tradition when she made claims about a pro-Israel lobbying group that, unfortunately, crossed the line into anti-Jewish stereotype.

As he is wont to do, Trump didn't apologize or back down despite widespread attacks from many prominent Jewish Americans (and lots of other people) Instead he doubled down, going on Twitter Wednesday to browbeat Jews some more about how they owe him their votes. He lengthily quoted a conspiracy theorist named Wayne Allyn Root, who describes Trump as "the greatest President for Jews" and claimed that Israelis "love him like he’s the King of Israel" and "the second coming of God." (That's bizarre, since Judaism doesn't believe in a "second coming." That's a Christian concept by definition.)

It's tempting to spin a just-so story about why Jewish voters don't support Trump, who shares the fascistic tendencies and attitudes toward refugees that have been deadly for Jews in the past. But it's probably just that most American Jews are Democrats with liberal social views, and have been so for more than a century.

This strategy of using threats and blackmail to intimidate voters into backing him isn't just being used against Jewish voters. Trump rolled out a similar line of argument last week, in a rally in New Hampshire.

"You have no choice but to vote for me," Trump threatened the crowd, claiming that if they don't, "your 401(k), everything is going to be down the tubes."

This is, as usual, barking nonsense. One real-world concern about Trump's possible re-election — one among many, anyway — is that his already terrible handling of the economy, which is likely headed towards a recession, will be much worse if he gets four more years. The U.S. and world economy could take decades to recover from his capricious trade wars and tax cuts for the rich.

But despite Trump's tendency to make big promises he has no intention of keeping and his love of mindless hyperbole — how often does he tell us that he's the "best" and the "greatest" and the "most beautiful" — he probably knows he can't actually make a positive argument for himself to voters. He hasn't done a single, solitary thing to improve the lives of his middle-class and working-class supporters. Instead he signed a massive tax cut for the rich that will make most people's lives worse by exacerbating wealth inequalities.

Trump's hardcore base, of course, will never leave him, because they love his racism and sadism. But for that small percentage of voters who may be getting sick of him, all he has left to try to keep them in the fold is threats and blackmail. That was true in 2018, when Trump's main campaign strategy to back Republicans in the midterm election was to try to scare white voters into believing that a "caravan" of scary people was trying to "invade" the U.S. across the southern border. (It was, in reality, a group of refugees trying to escape oppression and violence.)

To be fair, it's not clear that Trump's attempts at browbeating Jewish voters are actually a sincere effort to win their support. As when he scolds people of color — whether they're congresswomen or NFL players — about how they owe white America gratitude and compliance, this may all be a display for his core base of voters, who are overwhelmingly Christian-identified. It's about portraying American Jews as untrustworthy and ungrateful, and compelling his voters to see them as a threat that can only be contained by re-electing the supposed strongman in the White House.

That should still be understood as a kind of threat, since it taps into old anti-Semitic stereotypes painting Jewish Americans as, well, a fifth column of "socialists" who are out to undermine America. It's about intimidating conservative-leaning voters who may have their doubts about Trump into feeling they have to vote for him in order to stave off social upheaval.

Fear-based politics can often work, for good or for ill. George W. Bush managed to sneak in a 2004 election win by running a campaign that went hard after the idea that terrorists would kill us all if John Kerry won the election. In 2006, Democrats won big in the midterms by arguing that Bush was going to gut Social Security. Trump beat Hillary Clinton in 2016 by leaning into men's fears of female power.

In many cases, fear-based politics are justifiable — Bush was, in fact, going to gut Social Security — but it's not always clear that they work better than positive messaging, perhaps best exemplified in recent years by Barack Obama's 2008 campaign, which ended in a landslide victory. This was demonstrated in 2018, when Trump's sloppy campaign based on telling white Americans that brown-skinned refugees were coming to rob and kill them, was a major failure, and Democrats regained control of the House of Representatives.

Whether it will work or not remains to be seen, but threats and blackmail are all Trump has. It's not just that he has nothing good to offer Americans. It's also that he is the consummate bully, incapable of genuine kindness or positivity. Dominating and threatening people are all he knows. As the economic indicators get worse and polls continue to show Trump as a historically unpopular president, this ugliness will only get worse.