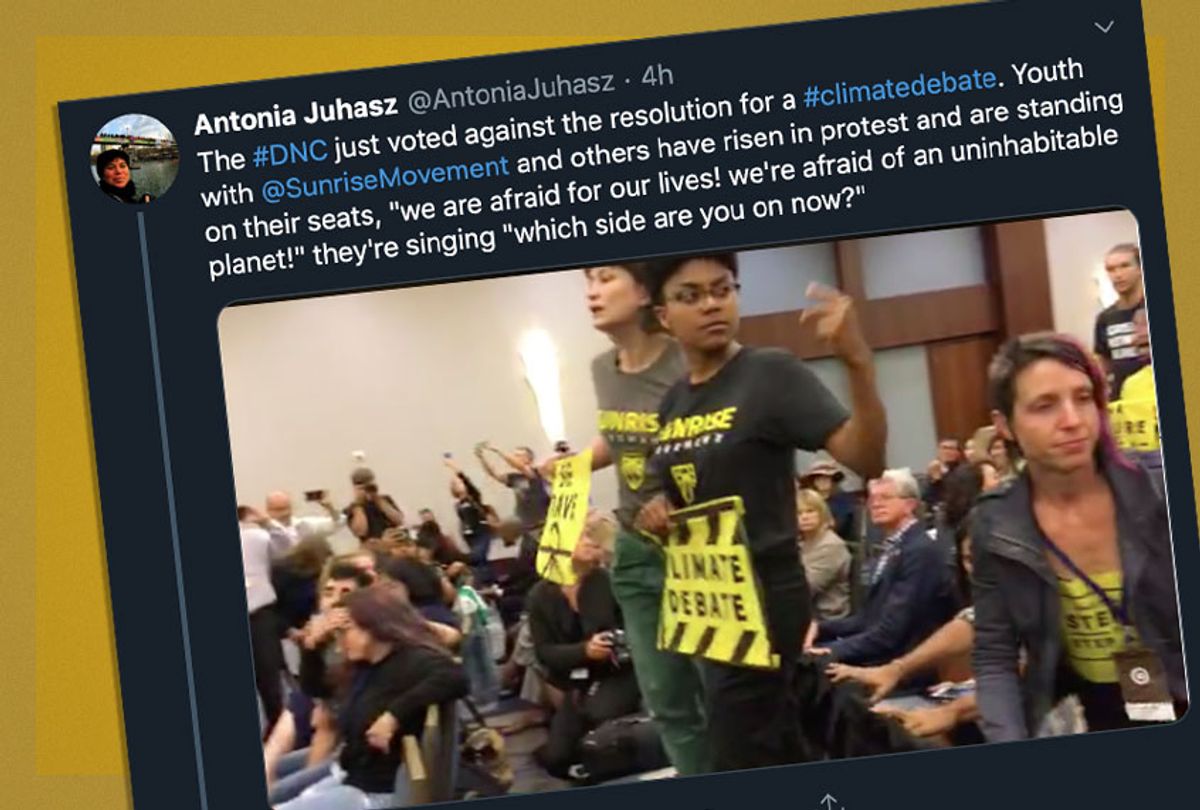 Sparking immediate protests at the Democratic National Committee's summer meeting in San Francisco Thursday, the organization's Resolutions Committee voted down a resolution that called for a climate-focused debate among 2020 presidential primary candidates.

The committee's 8-17 vote on the resolution outraged members of the youth-led Sunrise Movement in attendance, who stood on their seats and sang the union protest song "Which Side Are You On?" before walking out.

"California was literally on fire last year — we know firsthand that climate breakdown is killing people and destroying livelihoods right now," 26-year-old Sunrise volunteer Alex Morrison, who moved to San Francisco from South Florida, said in a statement. "Time is running out to save our generation. Young people need to know which candidates for president are treating the climate crisis like the emergency it is."

"We deserve a chance at a livable future," another Sunrise activist shouted after the vote, according to HuffPost. "We deserve a climate debate."

Although the resolution favored by activists failed, HuffPost noted that "the DNC voted in favor of another resolution to sanction a less-formal forum on the issue. It was a predictable outcome. Top brass at the DNC opposed the climate debate from the get-go, fearing it could sow discord in the base and hamper the eventual nominee in the general election."

The committee passed an amendment — put forth by Travis Robertson Jr., state chair of the South Carolina Democratic Party — that reversed the ban on presidential candidates participating in non-DNC sanctioned climate events, which activists welcomed.

"This partial victory shows the strength of the grassroots movement and the power of young people," said Sunrise Movement spokesperson Sofie Karasek. "In the coming days and months, we'll keep fighting to make sure the DNC and Tom Perez treat the climate crisis like the emergency that it is, and give it the airtime and attention that it deserves."

The committee meeting came after months of demands from environmentalists and many presidential hopefuls — particularly Washington Gov. Jay Inslee, who ended his campaign late Wednesday — for the party to hold a primary climate debate. In spite of pressure from climate campaigners and candidates alike, Perez has maintained his opposition to any "single issue" debate.

The Guardian reported before the vote Thursday that "supporters of a debate say they won't be deterred. There are plans to bring the resolution to the convention floor for a vote on Saturday. And, if that doesn't work, they plan to continue to raise the issue throughout the long primary campaign, with the hopes that candidates will take up the issue and demand the debate themselves."

"Poll after poll shows that the climate crisis is at the top of the agenda for American voters right now," Ken Martin, one of the resolution's sponsors and chairman of the Minnesota Democratic-Farmer-Labor Party, said in a statement. "If we Democrats are serious about electing a new president and committed progressives up and down the ticket, then we should start following the lead of the young people whose energy will be critical to win in 2020."

Ahead of the vote Thursday, members of the Sunrise Movement and other progressive activists packed the room where committee members were gathered to discuss and vote on various resolutions. Chants of "let them in" broke out as some observers without credentials were denied entry by security. According to one reporter, about 100 people stormed the room anyway.

During the debate Thursday, some DNC members praised Sunrise for its commitment to drawing public attention to the climate emergency. The movement spearheaded a grassroots mass mobilization in favor of a debate in the seven weeks leading up to the meeting.

Last month, both CNN and MSNBC announced climate-focused forums for presidential candidates. Though activists welcomed those events, they continue to demand a DNC-sanctioned debate.

Nearly half a million grassroots activists pushed their DNC members to support a full-fledged climate debate between the candidates. It's proof of their grassroots power that the resolutions committee advanced something we believe will encourage more direct debate on the climate crisis by allowing multi-candidate forums with simultaneous 'discussion' between candidates.

We will keep the pressure up on the DNC to pass these resolutions on Saturday. The climate crisis is too important to both our future and our ability to mobilize the voters we need to beat Donald Trump — the DNC must use this opportunity to showcase the clear contrast between the Democratic candidates and Donald Trump on the climate crisis, whose only answer to this emergency is to deny that it is even happening.