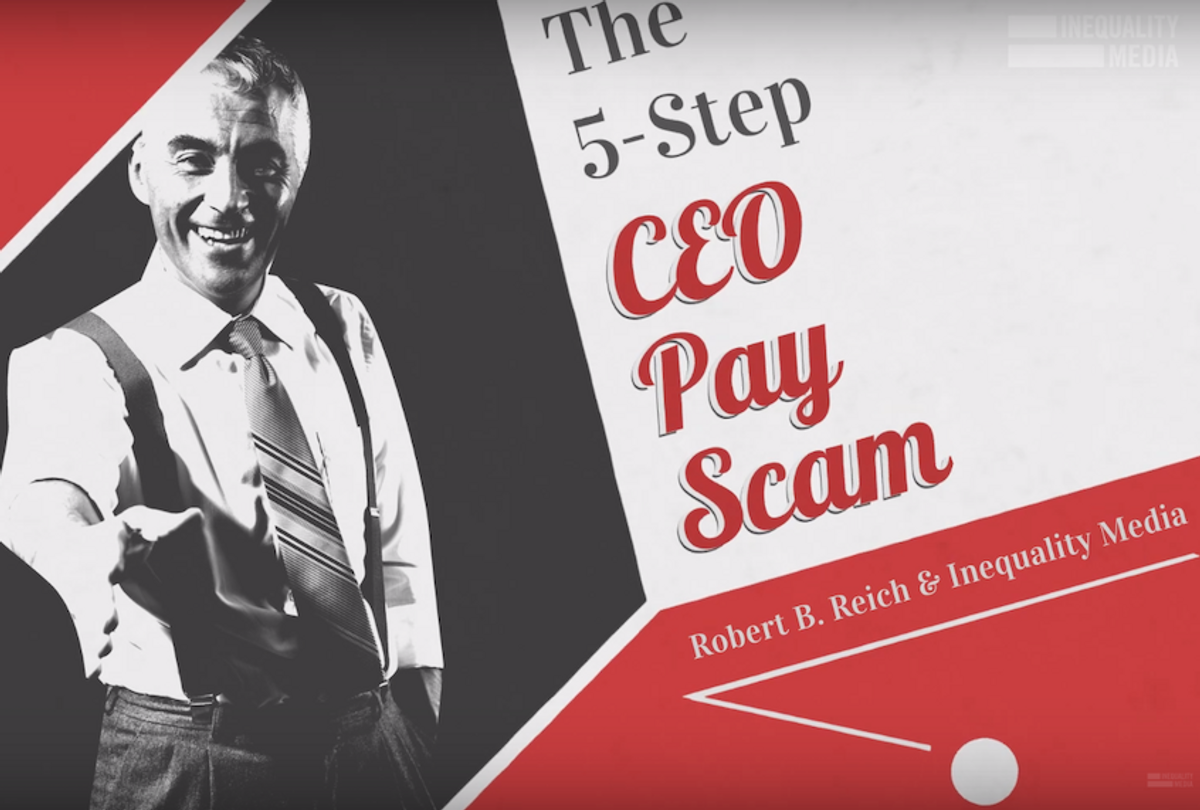 Average CEO pay at big corporations topped 14.5 million dollars in 2018. That’s after an increase of 5.2 million dollars per CEO over the past decade, while the average worker’s pay has increased just 7,858 dollars over the decade.

Just to catch up to what their CEO made in 2018 alone, it would take the typical worker 158 years.

This explosion in CEO pay relative to the pay of average workersisn’t because CEOs have become so much more valuable than before. It’s not due to the so-called “free market.”

It’s due to CEOs gaming the stock market and playing politics.

How did CEOs pull this off? They followed these five steps:

First: They made sure their companies began paying their executives in shares of stock.

Second: They directed their companies to lobby Congress for giant corporate tax cuts and regulatory rollbacks.

Third: They used most of the savings from these tax cuts and rollbacks not to raise worker pay or to invest in the future, but to buy back the corporation’s outstanding shares of stock.

Fourth: This automatically drove up the price of the remaining shares of stock.

Fifth and finally: Since CEOs are paid mainly in shares of stock, CEO pay soared while typical workers were left in the dust.

How to stop this scandal? Five ways:

1. Ban stock buybacks. They were banned before 1982 when the Securities and Exchange Commission viewed them as vehicles for stock manipulation and fraud. Then Ronald Reagan’s SEC removed the restrictions. We should ban buybacks again.

2. Stop corporations from deducting executive pay in excess of 1 million dollars from their taxable income – even if the pay is tied to so-called company performance. There’s no reason other taxpayers ought to be subsidizing humongous CEO pay.

4. Increase taxes on corporations whose CEOs make more than 100 times their average employees.

5. Finally, and most basically: Stop CEOs from corrupting American politics with big money. Get big money out of our democracy. Fight for campaign finance reform.