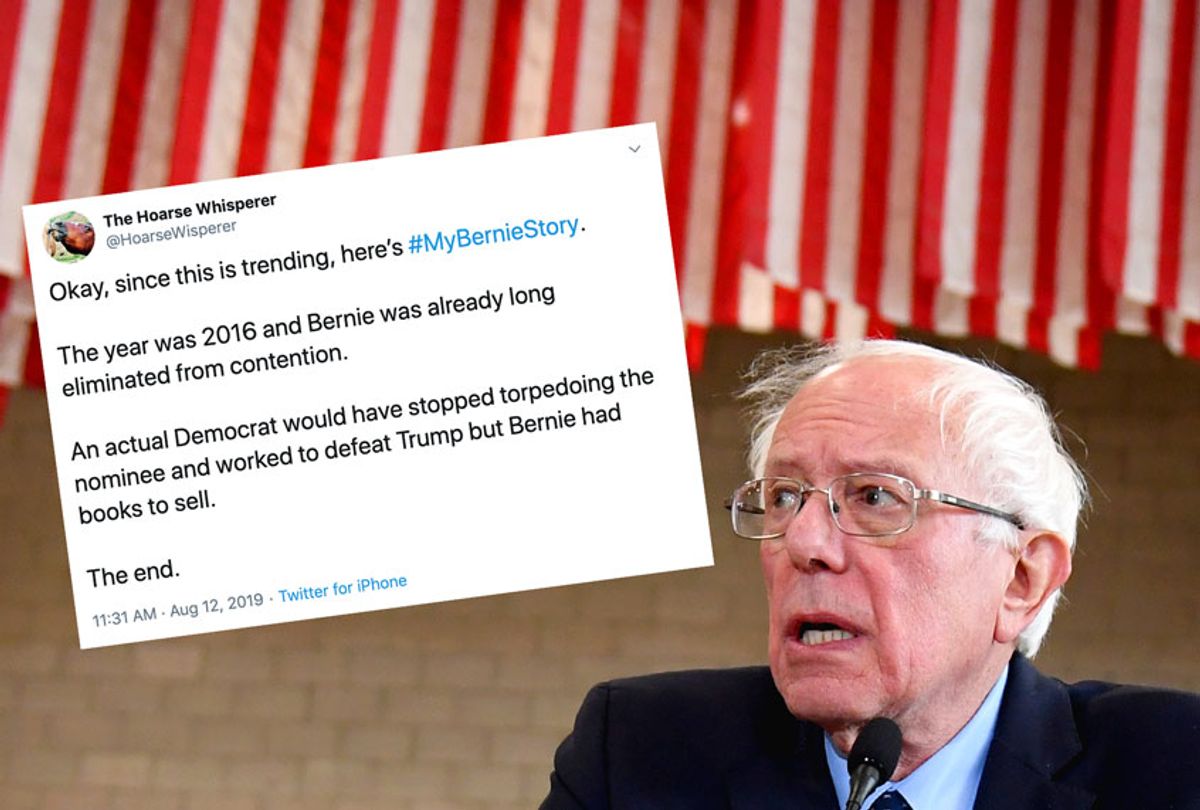 Bernie Sanders supporters are not paranoid to suspect that there is a conspiracy to prevent him from getting the presidential nomination. Indeed, given the existential threat that his politics pose for the rich and powerful, the Democratic Party elite and their wealthy donors seem downright terrified of his redistributive policy platform. Hence, many large media outlets and the elite pundit class have, often subtly, allied themselves against him.

FAIR founder Jeff Cohen wrote a probing essay for Salon recently explicating how the anti-Sanders "barrage" had manifested itself in outlets like the Washington Post, which during the 2016 campaign once published "16 negative stories on Bernie Sanders in 16 hours." "Bernie Sanders is one of the world's most effective critics of Jeff Bezos and the fact that Amazon paid no federal income tax last year," Cohen wrote. "And the Bezos-owned newspaper has exhibited an unrelenting bias against Sanders in recent years." Likewise, WikiLeaks email dumps from the Democratic National Committee revealed suggestions of internal bias against Sanders, which led to the resignation of then-DNC chair Debbie Wasserman Schultz.

So last week, when MSNBC reported on a trending hashtag among Sanders supporters by picking up a hostile tweet rather than an earnest one, the exhibition of bias was no surprise for Sanders' fans. A scan of the trending hashtag in question, #MyBernieStory, reveals a fount for Twitter users to explain how personal events in their lives had politicized them and brought them to support Sanders. Exemplary tweets from the hashtag included stories of supporters whose identities clashed with the disingenuous media depiction of white, male "BernieBros" (which is objectively untrue, as a Pew poll found Sanders supporters were the least white, least male and majority working class); or those who had been failed by the welfare state and found hope in Sanders' plan for Medicare for All.

The hashtag gained enough traction that Brian Williams of MSNBC, reported on it on his show, "The 11th Hour." But rather than give any context for the tweet, Williams and his crew displayed a single, disingenuous tweet mocking the hashtag from an anonymous Twitter account with a large following.

"Okay, since this is trending, here's #MyBernieStory," HoarseWhisperer wrote. "The year was 2016 and Bernie was already long eliminated from contention. An actual Democrat would have stopped torpedoing the nominee and worked to defeat Trump but Bernie had books to sell. The end."

Shrewd politicos will note that HoarseWhisperer's tweet is not even true on face value. Clinton ultimately won the nomination thanks to superdelegates, the appointed group of Democrats who largely represent the party's elite. While Clinton indeed had won more votes and more delegates in Democratic caucuses and primaries, she did not have enough to win based on that alone. The near-unanimous support of super-delegates put her over the top.

On his MSNBC show, Williams provided none of that context.

Many of Sanders' core supporters were incensed at what felt like a blatant media bias against him. "[MSNBC's Brian Williams] just cited this #MyBernieStory in his coverage of Bernie's claim of media bias," Briahna Joy Gray, the Sanders campaign's press secretary and a Current Affairs contributor, wrote on Twitter. "Not the #MyBernieStory of a man living with HIV, or of DACA recipients. [O]r of students with crippling debt. Out of thousands of stories -- enough to trend globally — he chose this guy."

The Washington Examiner, typically a right-leaning newspaper, reported on the incident. "Brian Williams just tried to make an anonymous Twitter troll into a source," the headline blared. "Just to recap: Brian Williams cited an anonymous troll who accused Sanders falsely of 'torpedoing' Clinton to claim some Democrats are upset with the senator's Trump-like talking points," Becket Adams wrote. "And the anchor cited a stupid #Resistance tweet unconnected to the larger issue of Sanders' criticisms of the Washington Post."

And so, as another entry in a long encyclopedia of clearly biased media coverage of Bernie Sanders, the story seemed to end there.

Immediately after that, another tweet from an MSNBC journalist hinted that something fishy might be going on.

Stephanie Ruhle, an MSNBC reporter who was not on Williams' segment, tweeted directly at the mysterious HoarseWhisperer: "Lookin good on ['11th Hour'], HoarseWisperer !!" 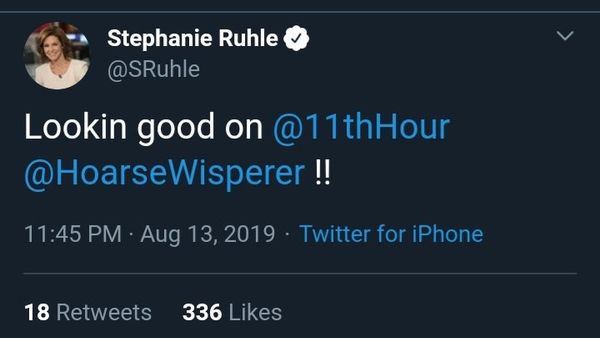 The informal way that it was written prompted speculation that Ruhle, or other MSNBC correspondents, might know HoarseWhisperer. Adding fuel to that speculative fire, Ruhle later deleted the tweet.

That raised the question: Was this an inside job, an intentional example of an establishment-approved "#Resistance" critic airing disingenuous Sanders hate on an overtly liberal network?

HoarseWhisperer, a self-described "Twitter rando" with more than 200,000 followers, posts regularly on American politics from a center-left perspective. They seem to have a persistent dislike for Sanders; one tweet from last week mocked Sanders' Medicare for All plan and personally attacked Sanders, posting to a Washington Post story (naturally).

Some Twitter sleuths were curious about the connection. Did Ruhle — or Williams, or other MSNBC journos, have a relationship to HoarseWhisperer?

Jack Allison, cohost of Struggle Session, a popular leftist podcast, did some sleuthing, in concert with other Twitter users. He connected HoarseWhisperer to a prominent consultant who had worked in the past for oil companies and banks, and done marketing for the military.

As Allison explained to Salon, figuring out HoarseWhisperer's identity wasn't that difficult: HoarseWhisperer has penned 88,000 tweets over the years, many of which had personal details. "The long and short of it is that I got into it with Hoarse some months ago," Allison told Salon. "After that I was contacted by some resistance accounts who had a grudge with HoarseWhisperer."

"I guess the world of #Resistance Twitter is kind of backstabby," he mused. "And the Hoarse had enemies.

"So I got [direct messaged] by these people I had never met before, and they already had gone pretty far down the line with figuring out who this guy was, mostly from his public tweets."

Suddenly, everything started to make sense about HoarseWhisperer.

On their own Twitter in 2017, HoarseWhisperer discussed doing "military marketing programs"; but they denied the charge when confronted last week after Twitter's collective snooping.

From here, things really got weird.

DailyKos, a liberal-leaning group politics blog and news site, reported on Allison's sleuthing in a community post that ran with this headline: "Bernie Sanders's Campaign Doxed a Critic on Twitter." "Dox" is a netspeak verb, meaning to sleuth around and obtain personally identifiable information (i.e. documents or "dox") on an anonymous or pseudonymous internet personality, thus outing them.

Notably, Allison has no connection to the Sanders campaign, making the headline false. That headline has not been corrected. [Editor's Note: Two days after this story ran, editors at DailyKos changed the headline to "Bernie Sanders's Supporters Doxed a Critic on Twitter". The original headline is observable in the article's URL slug.]

DailyKos, like Huffington Post and, previously, Forbes, allows "community reporting," meaning that almost anyone can make a post on their own site and gain the imprimatur of the site's brand. While publishers such as the aforementioned tilted towards this opening-the-floodgates strategy as a means of getting clicks for free, this strategy carries risks — namely, it can cause fake news to proliferate under the brand, as in DailyKos's case.

In any case, the allegation that a Sanders critic had been doxxed provided fuel for the anti-Sanders crowd to mock Sanders supporters again. "You find doxxing justified?" tweeted Neera Tanden at talk show host Sam Seder, after Seder retweeted a post about HoarseWhisperer's questionable motives and career background. Tanden is president of the Center for American Progress, a liberal think tank that has been a persistent voice for pro-Clinton and anti-Sanders rhetoric. She pushes a "moderate" policy platform that could be described as neoliberal in orientation.

Perhaps unintentionally, Tanden's tweet hinted that the details about HoarseWhisperer's life and career were accurate, and that Allison's deduction was correct as to who he was. Further, it suggested that Tanden might know the person in question.

Salon reached out to HoarseWhisperer for comment, but did not receive a reply as of publication time.

Once again, the dust-up proves little beyond what Sanders supporters already knew: that the liberal elite of media and punditry, in general, do not like Bernie Sanders and will go to great lengths to depict his supporters as bad people, hoping that readers and viewers will view his entire campaign through that lens. One could almost conclude they are frightened.