How do we recover from the surreal nightmare of this presidency? It will take some work

After Greenland and let's-nuke-the-weather, Donald Trump has been almost fully normalized. That must be undone 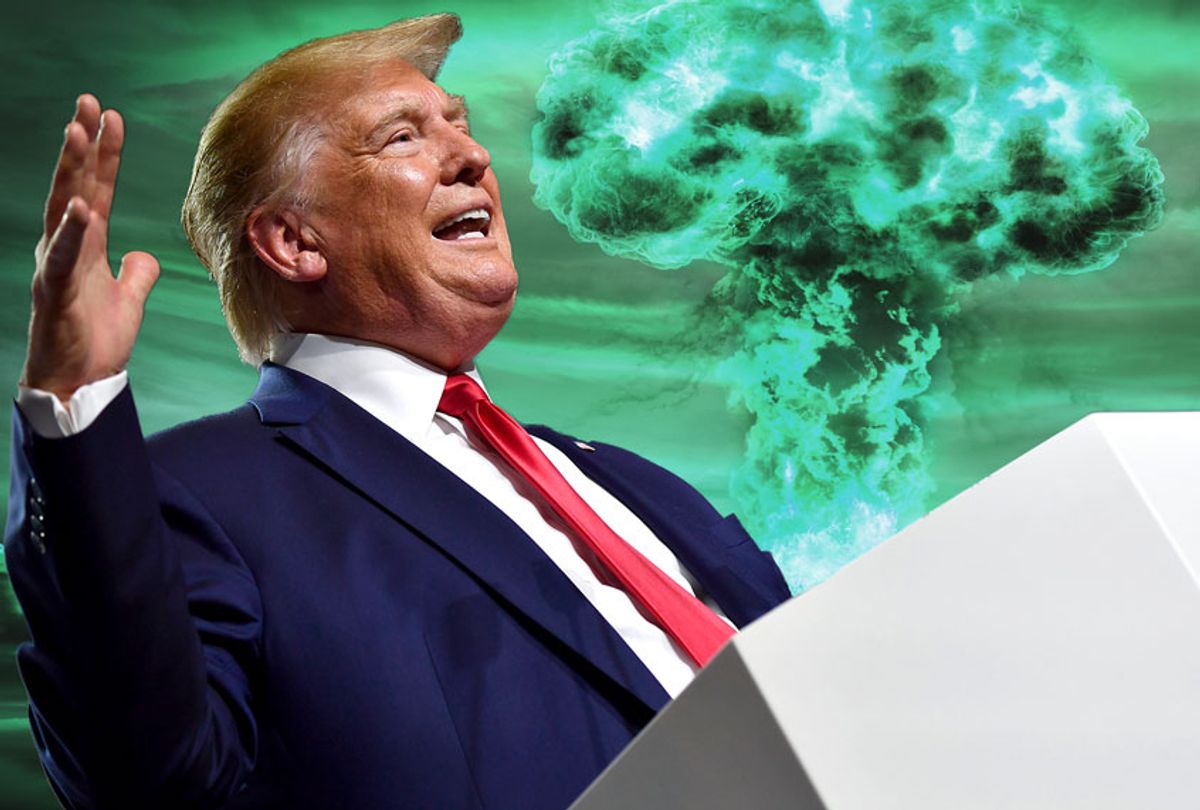 Back in the middle 1990s, HBO premiered one of the great sketch shows of our time. “Mr. Show with Bob and David” was hosted by Bob Odenkirk and David Cross, and one of the most memorable sketches was one in which President Guy “Whitey” Corngood decides to literally blow up the Moon. “And we’ll be doing it during a full moon so we make sure we get it all,” Odenkirk’s NASA character added.

Today, reality — or Donald Trump’s twisted, bastardized version of reality — has exceeded any previous efforts at satirizing the ludicrousness of American politics. We could literally sit here for hours listing the thousands of Trump things, but the perfect illustration of this phenomenon dropped in our laps late Sunday.

Axios reported that Trump apparently suggested to Homeland Security officials that the United States should try dropping nuclear bombs into hurricanes over the Atlantic Ocean in order to somehow dissipate the weather systems. He reportedly brought up this nonsense on several occasions.

Yes, Trump wants to nuke the weather. By the way, Chris Cillizza of CNN took a stab at attempting to discover whether it would actually work — duh, it’s a catastrophically dumb idea, so dumb that there’s no reason to elaborate on the science of such a cartoony, Sharknado-inspired chunk of horses**t. It's like trying to unravel the physics of Wile E. Coyote’s efforts to kill Roadrunner.

It’s entirely possible this was a little bit of internal West Wing trickery in which someone, maybe even Trump himself (aka “John Barron, Press Agent”), leaked the story in order to manufacture a distraction from warnings of a recession or whatever. It’s also possible Trump wants to further prove that the press is fake news by feeding deliberately fake stories to reporters. Who knows for sure? Lacking any evidence of trickery, we have no choice but to take the story at face value: Trump believes nuking hurricanes is a tremendous idea, fitting perfectly on a list of his greatest hits.

Frankly, I hesitated for a few minutes before tweeting about the story on Sunday, because I thought it was satire. I thought perhaps Axios had launched an unfunny Onion knockoff or maybe it was a lookalike Axios site launched by hackers. In fact, even after I tweeted, I went back and further scoured the article for any winks or nudges. Nope. It was hard news, surpassing both Greenland and Space Force on the spectrum of the Mad King’s most Strangelovian outbursts. The question now is whether this will turn out to be Greenland, to be quietly abandoned by the White House, or whether it’ll be like Space Force, which started as a kooky fever dream and became an actual policy initiative. Hopefully it’s Greenland.

Strangely, however, the reaction online was kind of meh. Few observers on political Twitter bothered to pay much attention, and it was treated like more of a side note. A kicker story. The reaction reminded me of that scene in "Ghostbusters" when Rick Moranis, chased by the Keymaster of Gozer, runs up to Tavern on the Green in Central Park and bangs on the window, screaming for help. The dinner crowd turns and stares at Moranis for a beat then casually turns back to finish their meals. The president said we should change the weather by nuking it? Huh. What’s for dessert?

My concern has always been the gradual normalization of Trump’s unforgivably destructive behavior. The longer Trump remains president the more Trumpism will become metastasized in our collective political culture. In my darkest moments, I believe it’s too late — it’s already in our bones.

The very presence of Trump occupying the Oval Office has permanently broadened the state of play for the presidency — broadened the degree of latitude the president now possesses to paint outside the previous lines. Presidents and presidential candidates are now at greater liberty to exhibit behavior that would heretofore have been punished with rejection and exile from the ranks of seriousness and normalcy. Whether we like it or not, Trump has written new rules for the presidency by exploiting loopholes in our system, a system that’s built on the rule of law, traditional norms and constitutional strictures.

Trump has hurled his ponderous bulk through wall after wall, Kool-Aid Man style, and once he leaves office, it’ll be up to the rest of us to repair those Trump-shaped holes. In order to do that, we need to fight to throw off the normalization of Trumpism now, even as it calcifies, while creating presidential reforms that prevent Trump-copycats or the next iteration of calamitous dumbness on a continuum that includes proto-Trumps such as George W. Bush and Sarah Palin, among many others.

I get it. It’s nearly impossible for us to fully absorb each travesty as it whizzes past our faces at ludicrous speed. Prioritizing and focusing upon what Trump does over what he merely says is always a smart idea, just as long as we never regard his tweets and obnoxious blurts as being irrelevant or normal. The president’s words matter, too. Yet at this point, regulating how the president talks is more a societal adjustment than a legislative one.

While the next Congress will hopefully launch hearings to introduce measures to pull back the reins on Article II executive powers based on the loopholes Trump has exposed — not unlike during the years after Watergate — Americans must also once again reject demagogues and populist political tourists like Trump. We have to stop mistaking “This guy has ideas!” or “This guy is just like me!” for “This guy should be president!”

This goes for Democrats, too, but clearly the Republican side has popularized a brand of nincompoopery allowing anyone with a Q-score and a sack full of opinions to be automatically endowed with presidential stature. This goes hand-in-hand with the obvious failed idea that presidents should be just like us — that they should talk and act like us.

At some point, respect for the office receded and many of us began to believe the false propaganda, much of it also emerging after Watergate, that the presidency is something anyone can do rather than a critical leadership post reserved for men and women who have earned the right and the restraint to wield that kind of power. I want presidents who are considerably smarter and more accomplished that I am. We all should want that. I especially want presidents who are more disciplined than I am, rather than presidents who comport themselves like bastardized versions of the worst Twitter trolls.

No, we absolutely won’t hit a home run on this front every time. We’ll surely have a few duds in the White House, no matter how we adjust as voters in a post-Trump nation. The point is to strive for more, to elevate our standards for whom we will task with the nuclear codes and the keys to our national future, so that maybe the duds will eventually be a little better than the best we can do today.

Ask yourself whether you’d ever allow someone who behaves like Trump to perform surgery on you or a family member, or whether you’d allow someone like Trump to coach your kids in Little League or become principal of your neighborhood elementary school. If your response is “No way,” why on earth would we allow such a substandard phony anywhere near the world’s largest economy, not to mention the world’s largest nuclear arsenal? We’re not picking a prime-time cable news host here, and we’re not choosing someone to “own” our political rivals. We’re choosing an American leader to occupy one-third of the federal government — to make life-and-death decisions at the highest possible level. For this task, most recently, we chose a compulsively dishonest blowhard who thinks that white supremacists are very fine people, and that nuclear bombs will stop hurricanes.

We failed badly. Let’s never do that again, huh?

It’s one thing to pass laws, fencing in the office to prevent another despotic takeover. It’s another to adjust our thinking and our standards, especially when entering our polling places. Trump has illustrated for us, with great pain, what happens when we carelessly devalue the office by willingly elevating incompetence and empty folksiness because a millionaire on TV told us to.

George Carlin once observed that selfish, ignorant politicians are a direct consequence of selfish, ignorant citizens. His observation was fulfilled on Nov. 8, 2016, and it’s slowly tightening its grip on our future unless we cut the crap and, finally, break the cycle. We have to do better, all of us, before a selfish, ignorant “man of the people” really does nuke a hurricane. Or worse.