In "Sticks & Stones," Dave Chappelle refuses to change for critics

Comedians are supposed to say the things we can't or won't. If everyone agrees, they're not doing their jobs 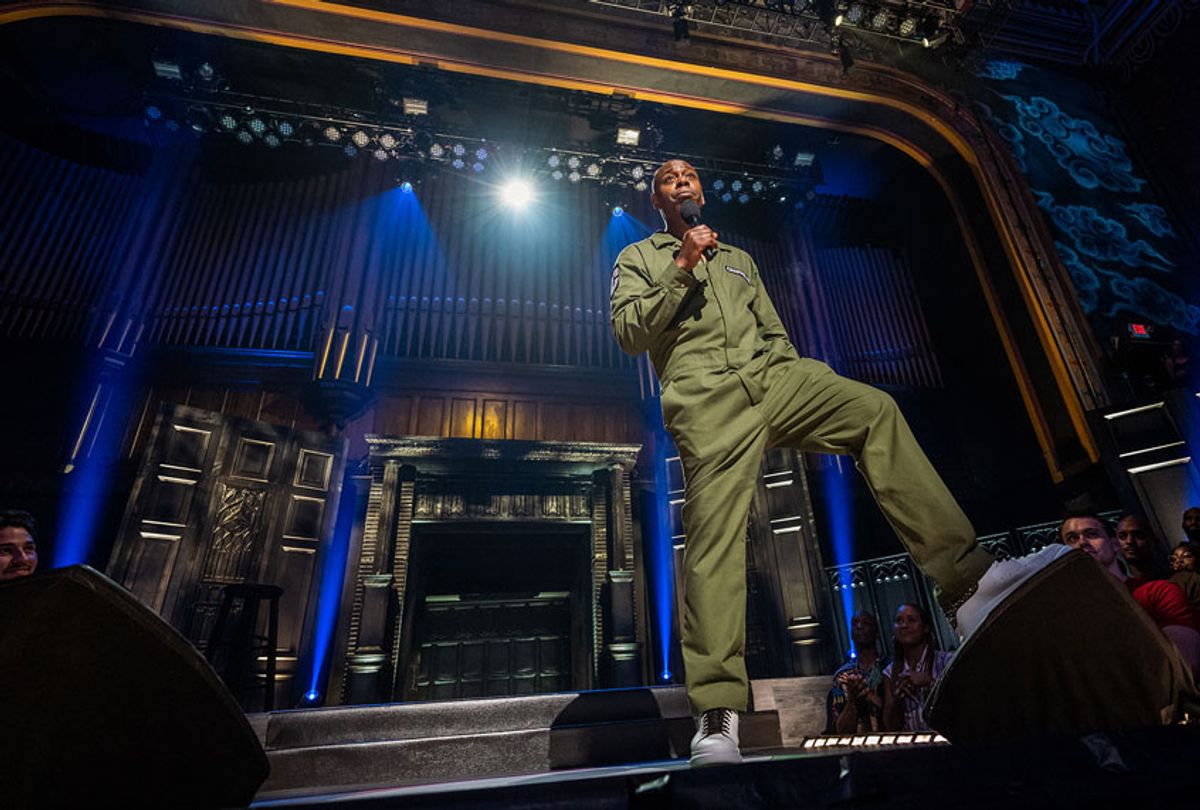 Dave Chappelle dropped his latest stand-up special on Netflix, "Sticks & Stones," yesterday. Once again, the critical backlash was swift. In Vice, Taylor Hosking wrote that Chappelle "chooses to blatantly ignore the historic criticism against his style of comedy and new loud-and-clear criticism from the trans community. His approach comes off like a defiant rejection of change at any cost." For The Ringer, Alison Herman writes that Chappelle "shares a basic misunderstanding of power—as well as the resulting victim complex—with many other celebrities, and a set of deeply held assumptions with that one uncle you pray you don’t wind up next to on Thanksgiving.”

As I wrote last year, when specials three and four of his Netflix deal dropped, Chappelle's comedy is deeply rooted in an approach to humor and storytelling that has numbed the pain of oppression for generations of black people in America:

Chappelle is a part of a strong tradition of black comedy that birthed guys like Dick Gregory, Richard Pryor and Paul Mooney — the harshest truth-tellers in history. It's a style that stems directly from the poorest black communities in America. Nobody is safe. Even your grandma can get railed on — and you better be careful, because her comebacks can make you cry.

As for me, I don't trust non-offensive comedians. The last self-proclaimed ethical comedian I remember was Bill Cosby and we see how ethical he ended up being in real life.

Yes, there are some cringeworthy parts of "Sticks & Stones." Some sections are too dark to repeat, let alone to laugh at. Isn’t that what we pay for? Comedians are supposed to express the things we can't or won't say, poke fun at the many biases people have, and highlight — which isn't the same as upholding — stereotypes as a way of shining a light on gaps in understanding.

Chappelle opens "Sticks & Stones" issuing a warning in the form of the lyrics to Prince’s “1999": “I was dreamin' when I wrote this, forgive me if it goes astray/ But when I woke up this mornin', could've sworn it was judgment day." He placed extra emphasis on the last line of the verse: “Tryin' to run from the destruction, you know I didn't even care!” Chappelle clearly doesn’t.

That sets up the rest of the performance, in which he seemingly embraces the obviously unpopular, politically incorrect side of a series of high-profile news stories about celebrities. He labels himself a “victim blamer,” asking what Rihanna did to provoke Chris Brown's assault, and why Jussie Smollett’s now-debunked attack story should never have been believed in the first place.

Chappelle is at his worst in "Sticks & Stones" when addressing the sexual abuse allegations against Michael Jackson; rather than pushing into any new territory he essentially recycles Jerrod Carmichael's material about celebrity and morality from Carmichael's 2014 HBO special "Love at the Store." On the allegations against R. Kelly, though, Chappelle sides with what's now popular opinion: “R. Kelly is different. If I’m a betting man, I’m probably putting my money on he did that shit.”

Chappelle is at his best when he tells the story of a meeting he had with a Comedy Central network executive from the Standards and Practices department who tells him that he can't use a gay slur on the air.  “How come I can say [the n-word] with impunity, but I can’t say" that? Chappelle asks, and he tells of the network guy responding, “Because David, you are not gay.” Chappelle fires back, “I’m not a n****r either.”

Dismissing Chappelle's work as simply or obstinately regressive is not unlike seeing the world through the same lens as that network executive. The point of Chappelle's ancedote is to question the safety of the system's selective outrage, of "standards and practices" in general being fine with him using demeaning language about people of the same race, gender and sexual orientation as him, as if identity alone neutralizes it, placing it within acceptable bounds.

Black comedy has never been a polite or safe place and it likely never will be. This is true on stage and off, and starts at a young age. When I was 10, a kid named Pete made fun of my huge head, saying it looked like a brown watermelon. I responded by making fun of his fake eye, which he had because he lost his real eye in a horrible car accident — the removable replacement bulged out of his left eye socket. Pete came back at me with jokes about my dad being a crackhead. That hurt because my dad was smoking crack at the time. Lucky for me, Pete’s mom was too — and I couldn’t wait to let the crowd know. Checkmate.

Were our actions nice? Absolutely not. Neither is black comedy. Black comedy is like the Hunger Games; it's not a place for respect or rules. People who can’t take that should not tune in, just as I choose not to watch the racist NFL. Comedians aren't political activists, nor are they necessarily allies or politicians. They have a different job to do. Show me a comedian that champions every cause I believe in and I’ll show you a show that I’d pay to avoid.