Durst's debut doesn’t even have the energy of a Limp Bizkit song, though it does actually feature one in a scene 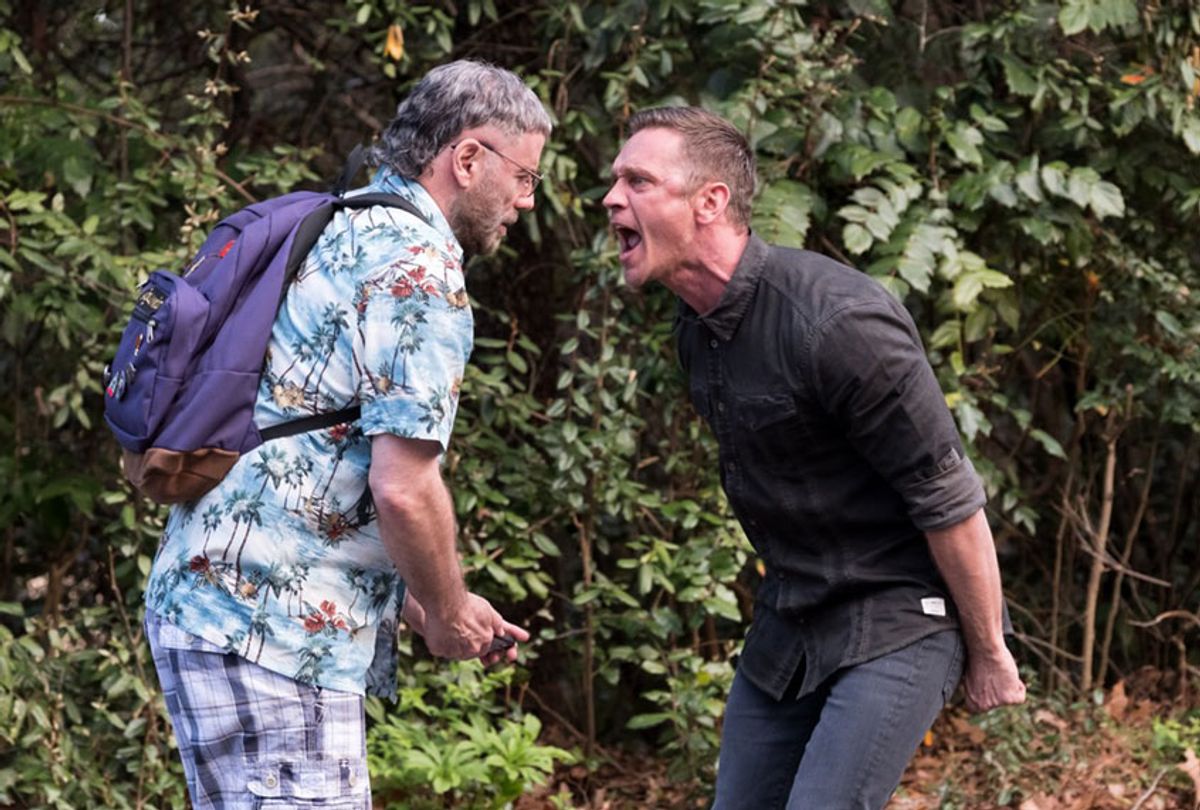 John Travolta as Moose in "The Fanatic" (Quiver Distribution)
--

“The Fanatic,” a celebrity-stalker cautionary tale directed, co-written, and produced by Limp Bizkit frontman-turned-filmmaker Fred Durst, is a discomfiting experience. But probably not in the way it was intended. Durst’s film, based on an episode from his real life, is neither a blistering industry satire like “The King of Comedy,” nor does it reach the campy, trash-tastic depths of “The Fan” (the nearly-forgotten 1981 Lauren Bacall thriller). Despite John Travolta’s committed turn as the title character, the film barely raises a pulse, much less sufficient interest as even a curiosity piece. “The Fanatic” needs to be stronger, or wilder, or creepier. Mostly, it just needs to be better.

Travolta, who seems to be racing Nicolas Cage to the bottom these days, gives a cringe-inducing performance as Moose. The film suggests Moose is on the autism spectrum, but Travolta overacts at every opportunity, magnifying every emotion and gesture, such as Moose's penchant to rock back and forth. A scene of him wailing is downright excruciating.

The film opens with a voice-over by Leah (Ana Golja), Moose’s best friend, who describes Los Angeles and how people can breakdown “like an old station wagon.” She and “The Fanatic” are setting the stage for Moose to have such a breakdown, and when he crashes his moped after a particularly difficult moment, Durst’s film shows its penchant for the obvious. It is not that one expects subtlety in a thriller from this genre, but some originality would have been appreciated.

Moose worships Hunter Dunbar (Devon Sawa), a hunky action film star — he is obsessed with his screen hero. Moose buys a studded vest the actor wore in one of his films, but wears it backwards to show how peculiar he is. He also kisses the garment when he hangs it up, another sign of his distinctive behavior.

But Moose’s reasons for loving Hunter are never made clear. Such ambiguity may benefit the story — it really doesn’t matter — but his goals in meeting Hunter include wanting his autograph and for Hunter to follow him on social media. Despite Travolta’s huffing and puffing, the film never illuminates Moose’s character sufficiently to show how harmful or harmless he actually is.

Moose is initially a sympathetic figure, and he is treated with kid gloves by Leah. However, his transformation to committing criminal acts and escalating, enraged behavior appears to be more about Moose having his own set of rules rather than understanding boundaries. His anger in some situations is not entirely unjustified, but Durst seems to be on Moose’s side until he isn’t. A brief flashback to a childhood moment fails to clarify Moose’s psychology.

When Moose does go full-on bat-shit cray-cray he is standing up to Todd (Jacob Grodnik), who bullies him on Hollywood Boulevard, where they perform for tourists. With spittle flowing, Moose threatens Todd: he wishes that Freddy Krueger would come around and chop Todd’s head off, and then it would roll into the street to be run over by a truck, over splattering blood everywhere. It’s one of the film’s three delicious howlers. (Another amusing bit has a bartender at a swanky-ish Hollywood party asking Moose what he’d like to drink. “A strawberry milkshake,” he answers in all earnestness.)

These exchanges are far more amusing or rousing than anything that transpires between Moose and Hunter. Durst does create a nice moment when he illuminates Hunter with a spotlight as Moose first sees him in the flesh at a book signing. It is pure fantasy scene, and used to make their first actual, uncomfortable encounter more painful. As Moose pursues his idol during an inopportune personal moment, the actor scolds his number one fan, “You need to learn some f**king manners!” Moreover, when Moose claims he just wants his autograph, Hunter responds, “How ‘bout I sign your face with my f**king fist!” Hunter is apparently a dick — especially since his acknowledgment of Moose’s social awkwardness is to call him a “stuttering f**k.”

“The Fanatic” persists in having Moose locate Hunter’s house, where he is warned again by the angry actor to stay away. But Moose only wants to deliver a letter and when he does get on the property, he is chased off by Dora (Marta González Rodin), the maid brandishing what looks like an Emmy as a weapon. (That’s LOL moment number three.) Hunter later kisses Dora in a pot-kettle-black scene that may suggest the actor does not understand the concept of inappropriate either.

If Moose had romantic designs on Hunter, it could have infused the film with some much needed frisson, but there is no homoerotic tension between the two men. Instead, there is a “supposedly” creepy scene of Moose covering Hunter, asleep in his chair, with a blanket and giving him a peck goodnight. (A later shot of Moose lying with his head on Hunter’s chest is far more intimate and unsettling.)

When Leah’s voice-over states that, “Moose didn’t just cross the line. He f**king nuked it,” it is hard to see evidence of that. In “Misery,” Annie Wilkes seriously hobbles her literary idol. Here, Moose petulantly asks Hunter to “Stop being mean!” and references “Reservoir Dogs.” By the time Moose has tied Hunter up and the two men each try to get what they want from the other, it is too late to want anything from “The Fanatic” other than for it to be over.

Durst’s film should have been nastier, or funnier. It doesn’t even have the energy of a Limp Bizkit song — though Hunter actually plays a tune from Durst’s band in a car scene that may be less shameless self-promotion and perhaps more “Remember why I’m famous?”

As Moose, Travolta is all mannerism and spectacle. When he insists, repeatedly, “I’m not a stalker, I’m a fan!” it is truly unbearable. In support, Sawa’s participation is largely defined by the tight-fighting shirts that show off his impressive muscular physique.

Ultimately, “The Fanatic” is worse than just being bad. It is boring.