With 2020 looming, Donald Trump pushes his grift and corruption to the next level

Trump's infomercials for his Doral National golf club, and his feud with the Fed, may be all about the Benjamins 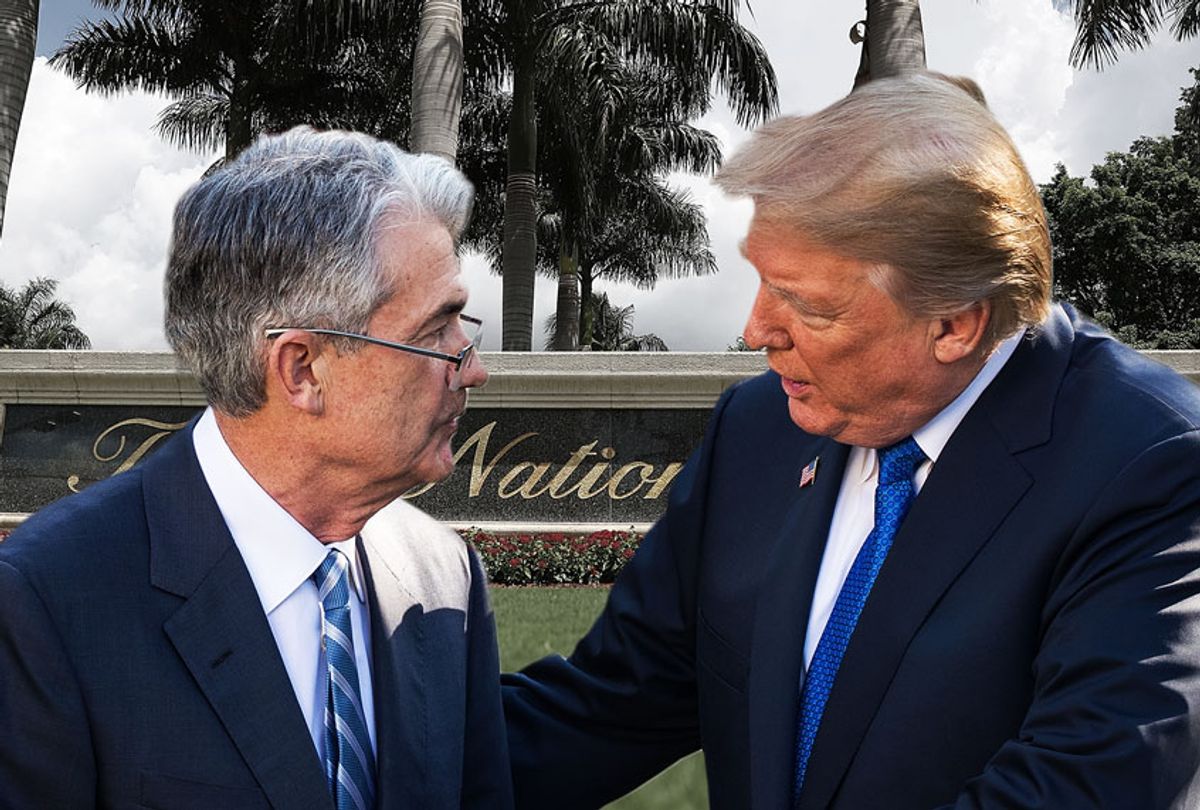 If I were a cynical person I might begin to wonder whether President Trump isn't hedging his bets a bit on the 2020 election. It's not that he doesn't exude his usual delusional confidence, of course. The man has suffered no loss of self-assurance despite the blazing Dumpster fire that is his presidency. Nonetheless, he's turned his focus a bit more obviously on his family business lately in a way that might suggest he feels that he'd better use his influence to boost his profits while he still has it.

For instance, Salon's Shira Tarlo reported earlier this week on Trump's stunningly inappropriate announcement that he was planning to use his Trump National Doral golf club in Florida as the host site for next year's meeting of the G7. His comments sounded like nothing so much as one of those video pitches he and his daughter Ivanka used to sell the dodgy condo developments that inevitably ended up making money for the Trump Organization — and leaving the buyers and financial institutions holding the bag when the deals went south.

During last weekend's G7 summit, Trump he acknowledged that the French did "a nice job architecturally" with Biarritz — one of the most renowned resorts in the world — and then began his spiel for his own golf club:

When reporters asked him at his final press conference what reassurances he could give the American people that he is not looking to profit off the presidency with such an event, Trump claimed that he has made a huge sacrifice by being president:

Well, I’ll tell you what: I’ve spent — and I think I will, in a combination of loss and opportunity, probably it’ll cost me anywhere from $3 to $5 billion to be president. And the only thing I care about is this country. Couldn’t care less. Otherwise, I wouldn’t have done it.

People have asked me, “What do you think it costs?” And between opportunity, not doing — I used to get a lot of money to make speeches. Now I give speeches all the time. You know what I get? Zippo. And that’s good. And I did a lot of great jobs and great deals that I don’t do anymore. And I don’t want to do them because the deals I’m making are great deals for the country. And that’s, to me, much more important.

That "$3 to $5 billion" figure is a joke, of course. There is little reason to believe that the man who would probably still be starring in a stale reality show and selling Chinese-made consumer goods plastered with his name would be making anything close to that.

He went on to make the sales pitch all over again:

Note that that advertisement comes from an official government Twitter feed. The White House itself is now flogging the president's private golf club.

Essentially, we had two infomercials for Trump's Doral club broadcast all over the world that day. All the cable networks showed stock footage of the property as they reported the story. That's a whole lot of free advertising right there.

That wasn't the only sign that Trump may be thinking he needs to use his power to shore up the family business — because he may not be in office after 2020. He took another aggressively corrupt action last week that in fact dwarfs the millions he might make by forcing taxpayers and foreign governments to stage a major global event at his private club.

Recall that Trump has been on a tear against Jerome Powell, the chairman of the Federal Reserve, over the Fed's reluctance to lower interest rates as much or as quickly as the president would like. He even tweeted out a question last week asking (rhetorically, one supposes) whether Powell was a bigger enemy than Chinese President Xi Jinping. Trump has been anxious for the Fed to goose the lagging economy, and the big stock market drops last week after he escalated his daft trade war with China undoubtedly rattled him. Trump seems to understand that his chances of re-election are substantially dimmed if the economy goes south over the next year.

But there may be more to it than that. If he begins to grasp that he may not be in office beyond . January 2021, his thoughts could be turning to more personal, pecuniary concerns that he can only affect while he's the president. The Washington Post reported last week:

President Trump stands to save millions of dollars annually in interest on outstanding loans on his hotels and resorts if the Federal Reserve lowers rates as he has been demanding, according to public filings and financial experts.

In the five years before he became president, Trump borrowed more than $360 million via four loans from Deutsche Bank for his hotels in Washington, D.C., and Chicago, as well his 643-room Doral golf resort in South Florida.

The payments on all four properties vary with interest rate changes, according to Trump’s official financial disclosures. That means he has already benefited from falling interest rates that were spurred in part by a cut the Federal Reserve announced in July, the first in more than a decade — and his payments could drop by millions of dollars more annually if the central bank grants Trump’s wish and further lowers short-term rates, experts said.

He likes to pretend that a few million dollars mean nothing to him. But remember, before he became president he was fighting off claims of fraud from his branded developments and his specious "Trump University." He almost certainly needs the money. According to the Post, Deutsche Bank extended the Trump Organization $364 million in loans, starting in 2012, through its slightly shady "private wealth division" rather than its normal lending unit.

Those funds went to buy the money-losing Doral resort and to renovate the Old Post Office in Washington, now the site of the Trump International Hotel, where anyone who wants to make a good impression on the the president can conveniently drop thousands of dollars. In fact, the Washington Post reported on Tuesday night that Attorney General Bill Barr is availing himself of that handy pass-through, booking a $30,000 Christmas party at the hotel.

I suspect that Trump's main motivation in all this is to secure his re-election by goosing the economy with a rate cut. After all, his protection against legal action stems entirely from his position as president. But while he may have told the public that he's no longer involved in the Trump family business, he is an inveterate liar and it's almost certain he knows exactly what the Trump Organization's bottom line is. If he has any inkling that his time might be up, he's going to use the power of the presidency to save his company and his family fortune. That was, after all, the main reason he ran for president in the first place.